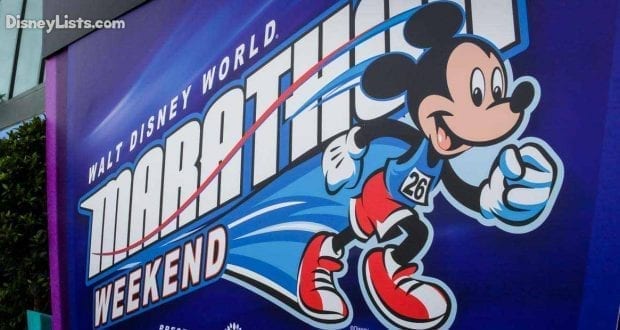 Posted by: Chad & Cindy Nykamp in Around the World, runDisney

We have been participating in Marathon Weekend since 2009 and look forward to it every year. This year marked our 6th straight Goofy Challenge and 5th consecutive Dopey Challenge. Yes, we’re that dopey over this weekend. With the marathon celebrating its 25 Anniversary run, 2018 was fantastic, even with challenging weather.

Here is Part I of our review of the 2018 Walt Disney World Marathon Weekend. Read Part 2 by clicking here.

1 – The Health and Fitness Expo

The Health and Fitness Expo is the first stop on race weekend for race packet pick up. The expo features celebrity runner appearances, the latest in running and fitness equipment, and seminars on training, racing, and nutrition. The Expo is also the best way to purchase official runDisney merchandise and other sports related products offered by exhibitors. Since all runners are required to pick up their own race bibs, it can get very crazy. This year was no different. In fact, it was worse than in years past.

This year, the set up and flow of the Expo was changed from previous years. Rather than all runners picking up their bibs at one location, runners had different locations to go to depending on what event they were participating in. Those running Dopey and Goofy were required to enter the upstairs of the HP Field House. Runners for the Kids races, 5k, and 10k picked up their packets outside of Champion Stadium. Finally, Half Marathon and Marathon runners picked up their bibs inside the Visa Athletic Center. While nice in theory, this didn’t work well. Dopey runners have one day, Wednesday, to pick up their bibs. This means that 9,000 runners were all trying to get their packets in a very small area over the course of eight hours plus any of the 3,000 Goofy runners who might be there early. The result was lines for bib picket being anywhere from 20-30 minutes just to get into the building. Then you waited in another line to get your bib. Other races experienced long waits as well. Families with members running different races needed to enter multiple lines. There was also confusion on where the runDisney official race merchandise was this year. Unfortunately, many runners found themselves waiting in the Dopey and Goofy line, thinking they were waiting for merchandise, only to find out they were in the wrong line. Inside the runDisney Merchandise Store

The experience for the entering the runDisney official merchandise store area was just as crazy. This was the worst we’ve ever seen it, and honestly, we’re not sure why. This year all merchandise was in one location: the floor of the HP Field House. The store size increased dramatically-more than doubling in size. This should have resulted in shorter lines. However, it resulted in much, much longer lines. This year I got to the Expo about 30 minutes later than I wanted to. I parked my car right around 12:00 pm when the Expo opened. By the time I got into the merchandise line it was 12:16 pm. I found out later that I was one of the lucky ones who actually made it into the HP Field House. I was inside and grateful because outside it was very cold and raining. But the line did extend outside. At noon, they had let in the first rush of shoppers. Needing time to let them shop and clear the store, they held the line until 12:54 pm. This was strange because in years past, they had let small groups of shoppers in every 5-10 minutes as other shoppers left the store area with their purchases. Needless to say, there were many very upset at the long wait. I did my shopping and then waited in another 30-minute line to purchase my items. By the time I got back outside around 2:10 pm the line for the merchandise extended all the way down the sidewalk to the fields. Reports were the line to get in peaked at around 2 hours long early afternoon Wednesday. Later the line to get in was around 1-1.5 hours long. Usually the merchandise line will improve as the day goes on. However, when I returned to the Expo around 6:00 pm with Chad, the merchandise line was still extended to the soccer fields. I’ve never seen a line to get into the building that late on a Wednesday. We understand fire codes and certainly appreciate a shopping area that is not jammed packed with people, but since the store was so big, we’re not sure why there were such terrible waits to get into the Expo on Wednesday this year. We certainly hope Disney revisits this policy for next year. The merchandise line extending to the soccer fields on Wednesday afternoon.

Another issue with the Expo that happens every year is race merchandise selling out. This year was no exception. The hot sellers this year were the race magnets. Many races distances were sold out on the first day. However the 5k magnet didn’t show up until the second day because it was late to arrive. Other Dopey gear sold out by the time I got into the store at 1:00 pm as well. Disney is always concerned about left over race gear, but this year they seemed to produce less race items.

I arrived at 12:00 pm and left around 2:50 pm. I shopped, picked up my Dopey bib and then my daughter’s 10k bib. I did not do any other expo floor shopping. Chad and I came back around 5:30 pm for his bib and to walk the Expo floor. At that point the line for the merchandise store was still well over an hour long.

2 – Schedules and Getting to the Races

In each of the races sections below, and in Part II, we’ve added our race morning schedule for you to get an idea of what time you have to wake up on race mornings. Keep in mind that this may vary widely from runner to runner. What works for us may not work for you. We like to give ourselves plenty of time for breakfast and waking up. Also, be aware that we generally fall into the middle to back of our corrals. This is fine with us. We know plenty of runners who make it their aim to be the first in their corrals. If you want to be at the front of your corrals then you’ll need to get up much earlier than we do.

We drive to the races even though we stay on Disney property. We find it to be faster and like being able to sit in our car before we head to the corrals, especially on those cold race mornings like this year. We also know our way around Disney property very well. It’s really a matter of preference whether to drive or take Disney transportation. For those who have to take Disney transportation, Disney suggested being on a bus no later than 4:00 am for the 5k and 10k and no later than 3:30 am for the half and full marathon. Why do you need an extra half hour (or more) for the half and full? Because you’ll find double the runners and you’ll have a twenty-minute walk from the bag check to the race corrals.

The Walt Disney 5k is a great race for the whole family to enjoy. Back in 2010, our young kids loved running their first 5k through Epcot. This year was another great 5k except that Elsa had brought winter to Disney World. The temperature during the 5k was 32 degrees with a wind chill of 26 degrees. That’s crazy cold for Central Florida. However, the 5k is also the shortest race, so we weren’t out there too long. It was a great race, crowded to be sure (all Disney races are crowded), but there were six character stops featuring some very unique characters. The course runs through World Showcase and Future World of Epcot.

Runner Tip: because the 5k is geared towards a family fun run experience, they do not time the race. There are no official times. Only Dopey runners have the timing chips on their bibs to record that they did complete the 5k.

For some photos of the 5k race view the slideshow below. A big thank you to Chris Mel Photography, who photographed all of the races and recorded the character meet and greets. You can check out all of Chris’ race photo albums on his Facebook page. Click the link to see the full album for the 5k race.

Characters on the course: Here was our schedule for the 5k:

Temperatures Friday morning were about the same as the 5k with temps at 33 degrees with a wind chill of 29 degrees. Thankfully we had been prepared for a very cold race weekend and had gone to Goodwill and Walmart to purchase “throw-away” jackets and sweats. Disney washes and donates all clothing left behind to charities throughout Central Florida. We also used body warmers under our shirts and for inside our gloves. These made such a huge difference in keeping warm prior to running. The 10k race begins with an out and back on Epcot roads. In fact, it’s not until mile three that you get into Epcot. However, there were three great character spots during this section of the race. After running back stage, runners make a trip through World Showcase, around Disney’s BoardWalk, followed by a short run through Epcot in Future World then around Spaceship Earth. Overall, it’s a fine course and Disney does what they can to liven up some of the road sections of the course.

The Disney World 10k is usually the first race to sell out. The 6.2 mile run is a nice step up from a 5k, but not so daunting as tackling a half-marathon. If you’re looking for a fantastic 10k, then be sure to put this race on your bucket list!

For some photos of the 10k race view the slideshow below. Thanks again to Chris Mel Photography. You can check out all of Chris’ race photo albums on his Facebook page. Click the link to see the full album for 10k race.

Characters on the Course Our schedule for the 10k was similar to the 5k:

For our report on the half and full marathon, be sure to read Part II of our 2018 runDisney Marathon Weekend Review. Read Part 2 by clicking here.