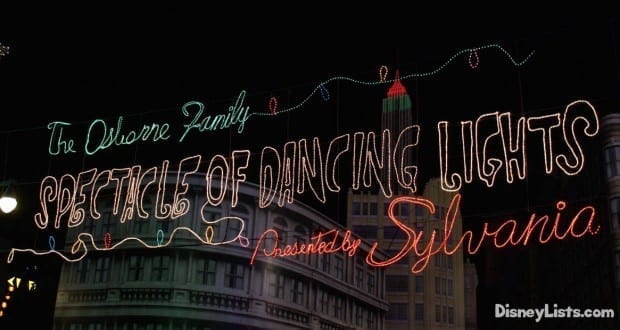 Posted by: Jenn S in Around the World, Special Events & Holidays

Editor’s Note: Sadly, the Osborne Family Spectacle of Dancing Lights has been retired. However, enjoy this walk down memory lane with some amazing facts and secrets from a holiday tradition that gave so many guests so many great memories over the years.

Jennings Osborne began setting up an elaborate Christmas lights display at his home in Arkansas in 1986 at the request of his daughter. Each year the show became bigger and bigger, and by 1993 Osborne had even purchased the two adjacent properties to his home to create his display of over 3 Million lights. But as the house was on one of the busier streets in Little Rock the attention it drew was less than ideal. Neighbors filed a lawsuit due to traffic and noise. In 1995 the Arkansas Supreme Court ordered Osborne to shut down the display.

Walt Disney World at the time was seeking a signature holiday event for what was then MGM Studios. They contacted Osborne and were invited to Little Rock to see what he had to offer. Osborne had millions of Christmas lights in storage sheds across the 3 properties he owned. Disney felt they could recreate Osborne’s display on their “Residential Street” a section of the Backlot Tour featuring facades of homes from movies and television. Technicians worked diligently for 3 weeks to get the lights set up, and Jennings even sent several of his own people to show how the larger pieces were put together. The lights debuted at MGM Studios on Nov 24th, 1995. In 2004, the lights were moved to the Streets of America section of the park due to the construction of the Lights! Motors! Action Stunt Show and removal of Residential Street. There were over 3 million lights in the original display at Osborne’s home, and the collection grew to over 5 million over the years at Walt Disney World. The lights were changed out to LED style lights in 2011, but the original icons from the Osborne home such as the giant globe, the 100 flying angels, and figures of snowmen, Santa with Mickey, and the 70-foot tree all remain as part of today’s display.

For many years the Osborne Family came to Walt Disney World to see the lights. Jennings Osborne did not want to be paid for the use of his lights but said his family would come Dec 23rd to Jan 1st each year to enjoy the lights that once decorated their homes. During one night of the annual trip, Jennings and his Daughter would turn on the lights with a special ceremony. Jennings passed away in 2011, but his family continues to visit each year.

The Lights did not always dance to music. In 2006 after the Lights had found their new home on Streets of America over 400 control switches were added to the display. This allowed the lights to be synchronized with music. The display was renamed “The Osborne Family Spectacle of Dancing Lights.”

One of the many special tributes to the Osborne Family is their stockings, hung over a large fireplace. Each member of the family has a personalized stocking. Located in the display of angels near the giant globe you will notice a solid white angel. This angel was added in 2011 in the memory of Jennings Osborne who passed away in July of that year. This tribute honors his life and philanthropic work.

Keep your eyes open for hidden Mickeys all throughout the display. Each year there are over 40 hidden in the lights. Some are easy to find while others are more difficult.

Legend has it that when Disney technicians began unpacking the lights, they found a figure of a purple cat, unsure of where it fits into the display they contacted Osborne who laughed and said it was a part of his Halloween decorations. Osborne told Disney they could keep it, so the technicians placed in the display. Each year is it located in a new spot and can even change several times throughout the show.  See if you can try to find it on your visit!

As you view the lights, you will notice that they will “dance” one song selection at a time followed by about a 7-minute period of the lights remaining still. During this quiet time, you will hear a “live” radio broadcast from WJBO. This station lettering is also a tribute to Jennings Osborne.

If you have the opportunity to see the final year of The Osborne Family Spectacle of Dancing Lights be sure to check them out. It is unknown at this time if the lights will return to Disney’s Hollywood Studios or another location in the future.  If you do get to visit the lights be sure to look out for the hidden Mickey’s and tributes to the Osborne Family throughout the display.