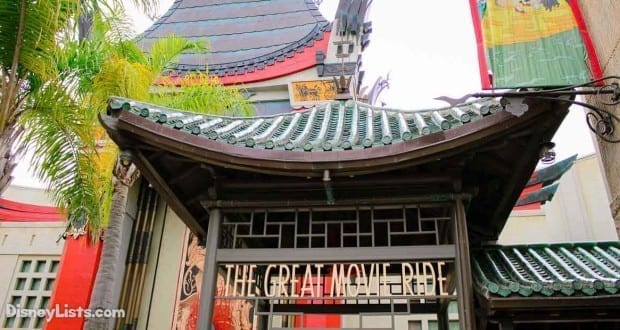 Posted by: Jenn S in Disney's Hollywood Studios, The Parks

Editor’s Note: Sadly, the Great Movie Ride has been retired. However, enjoy this walk down memory lane with some amazing facts and secrets from an attraction that has given so many guests so many great memories over the years.

The Great Movie Ride is an 18-minute attraction that takes you into some of Hollywood’s most famous movies. Debuting at the opening of then Disney’s MGM Studios, this attraction has been a fan favorite for decades. The outside is a nearly exact replica of the Grauman’s Chinese Theater in Hollywood California with one minor detail differing. The ticket booth is located on the opposite side at Walt Disney World! Here are 10 things you probably don’t know about The Great Movie Ride.

From 1989 to 1999, Hollywood celebrities were invited to take part in a hand print ceremony at what was then MGM Studios. Over a hundred sets of hand prints can still be seen outside the attraction today and include Michael J Fox, Mickey Mouse, Dick Clark, Carol Burnett, John Ritter and many more. But the most prized set of hand prints belong to Audrey Hepburn. Hepburn a leading lady of the Golden Age of Hollywood and was delighted to participate in the ceremony. However during the ceremony Hepburn began to cry, stating she was honored as she had never been asked for her hand prints before. Grauman’s Chinese Theater in Hollywood tried to correct the situation by inviting Hepburn to leave her hand prints there, but she declined. Thus, Disney has the only set of Audrey Hepburn hand prints!

The building for The Great Movie Ride is a replica of Grauman’s Chinese Theater in Hollywood California, even down to the smallest details. As you enter the lobby area of the theater if you look up you will notice two incense burners hanging from the ceiling. The Chinese Theater did burn incense for the first year it was opened. However it did not mix with cigarette smoke, which were permitted to be smoked inside the theater at the time. The theater discontinued the use of the incense, but Disney included the burners as a tribute to the original theater.

All of the leading animatronics have wigs made of human hair and at least three outfits that can be changed out. Animatronics leak fluid from time to time and it was imperative that additional costumes be available in case this were to happen. Gene Kelly, for example has three outfits for his Singing in the Rain scene, a dry suit, a partially wet suit and a suit that appears soaked.

The Great Movie Ride features almost 50 Audio Animatronics of famous Actors, and all are true to scale, except for one. Humphrey Bogart was actually an inch shorter than Ingrid Bergman in real life. While filming Casablanca they would position the camera so Bogart could sit or stand on raised platforms to appear taller than Bergman. This audio animatronics is taller than Bogart was in real life, and is the only one that is not the actual height of the actor it depicts.

This prop is hard to see, but on the floor of where Clint Eastwood’s character stands in the Western Scene there are several playing cards strewn about. These cards do not have any numbers printed on them and feature only the suits, as this was the style during that film’s time period.

It has long been known that Disney often “recycles” its animatronics and will use the same ones in multiple attractions. In the Western scene it is said that the bank robber is none other than President Martin Van Buren. And the Sherriff? Well he is Thomas Jefferson.

As you ride through the Alien scene there are several computers on the left hand side listing the various “crew members” of the ship and what their status is. The names on the screen are the names of the Imagineers that worked on this ride. Farther down is a computer screen displaying binary computer code. This code is said to be a very small portion of the original coding to make the Wicked Witch move.

The Indiana Jones scene is home to some very famous Hieroglyphics. See if you can spot Mickey Mouse and Donald Duck on the left and R2-D2 and C3PO on the right during this scene.

Jane’s fruit basket in the Tarzan scene contains two oranges, despite oranges not being native to the jungle. These two oranges represent Orange County California and Orange County Florida, the locations of Hollywood and Disney’s Hollywood Studios.

The Great Movie Ride pays tribute to many of Hollywood’s legends and the spirit of film. If you look throughout the attraction you will see the attention to detail in the scenes is incredible, making you truly feel like you are inside some of your favorite films. Do you know any secrets we missed?