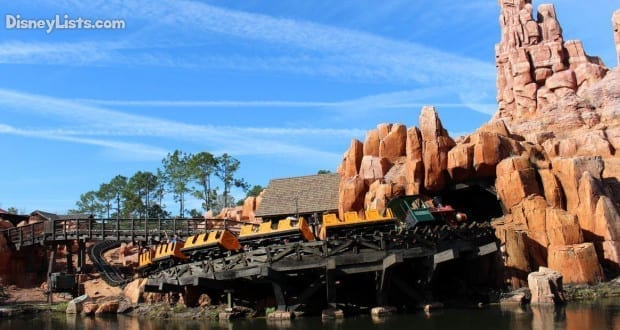 Big Thunder Mountain is definitely the most “rootinest, tootinest ride” found in all of Walt Disney World. The attraction lives in Frontierland at the Magic Kingdom. During the ride, you take off in a train on the Big Thunder Mountain Railroad through the mine with many incredible thrills and surprises along the way. The ride also holds various hidden secrets and extras that you may not have noticed, even if you have ridden the ride several times. Here are 10 facts and secrets you may not know about Big Thunder Mountain: Yep, you can actually trigger “explosives” to go off on the mountain. When you are in queue, pay attention to when you are in the Explosives Magazine room. There will be instructions for how to use the cranks and plungers to set off the explosions. Follow all directions and watch to see what happens.

6 – The crate meant to be shipped to Fire Chief Richard Le Pere Jr.

Have you noticed the crate that sits next to the drinking fountain at the front of the attraction? The create states that it is to be shipped to Fire Chief Richard Le Pere Jr. Fire Chief Richard Le Pere Jr. is actually a real person and a real fire chief. He is the fire chief at Reedy Creek Fire Department. This is important before Reedy Creek Fire Department is the fire department that services all of Walt Disney World Resort.