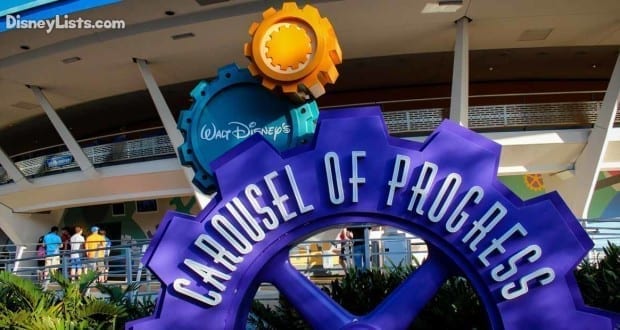 10 Facts and Secrets About Walt Disney’s Carousel of Progress

This really is one of my favorite attractions. Not only am I a massive fan of all things Disney, but I am a huge fan of Walt Disney himself. He is so inspiring, and I love getting a dose of attractions and experiences that he had a real hand and influence in. This is one of those attractions that gives you the feels for Walt as you enjoy it. Here are some of the great facts and secrets that you may not know about the Carousel of Progress: 9 – General Electric was the original sponsor.

When the attraction opened at the Magic Kingdom in 1975, it opened with the song, “The Best Time of Your Life” instead of the original song. In 1994 the attraction was restored to its original glory, and “There’s a Great Big Beautiful Tomorrow” came back as the theme song for the attraction.

You may already know that Walt Disney had a great working relationship with his favorite songwriters, the Sherman brothers. Richard and Robert Sherman worked very closely with Walt and wrote many of Walt’s favorite songs, including “Feed the Birds,” which was his all-time favorite. They are also the writers of “There’s a Great Big Beautiful Tomorrow.” Walt worked closely with them on this song, so the song really does give you a little piece of Walt when you hear it.

Uncle Orville is in a few of the scenes in the attraction.  The voice for Uncle Orville is the same actor who voiced Bugs Bunny!  Bugs managed to find a way to sneak into the happiest place on earth!

5 – There are 4 different key scenes and eras: There are actually four different hidden Mickeys in the final scene, the Christmas scene. You will notice a Mickey nutcracker on the mantel over the fireplace. There is also a white Mickey peppermill in the kitchen. You will also notice a painting on the dining room wall that looks like Mickey. Lastly, and probably most obviously, there is a plush Mickey within the presents.

You will notice that to each side of the stage are areas where other animatronics appear. These are the members of the family that our host is interacting with. In each of the era scenes, these side rooms change during the show. There is a scrim over each side, and when the lights are out, the stages on the side rotate 180 degrees so that you get a brand new scene, thus keeping the story moving. You likely wouldn’t even notice the change is happening unless you were looking for it!

2 – Same narrator from A Christmas Story.

The voice of the father and main character in the attraction is voiced by Jean Shepherd. He is the same actor who voiced the favorite Christmas movie, “A Christmas Story.” You will definitely be able to tell it is the same person if you are a fan of the movie!