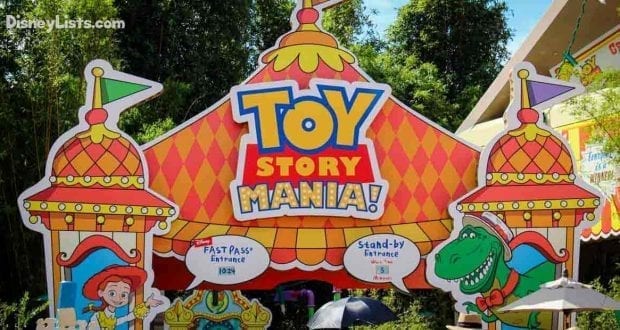 A great way to keep cool in any of the four Walt Disney World theme parks is to stop and enjoy a full-service meal. By stopping to sit down in air conditioning for a period of time, guests can refuel and feel refreshed and ready to continue exploring the parks at the end of their meals. Disney’s Hollywood Studios offers some great choices for dining such as Hollywood & Vine, The Hollywood Brown Derby, 50’s Prime-time Diner, and Sci-Fi Dine-in Theater.

6 – Voyage of the Little Mermaid

Editor’s Note: During the phased reopening of Walt Disney World, this attraction is temporarily suspended. One of the most popular attractions in Walt Disney World can be found in the Toy Story Land section of Disney’s Hollywood Studios. Toy Story Mania invites guests to magically shrink down to the size of toys and compete in a series of 3D midway games hosted by Woody, Buzz, and the Toy Story gang. Guests love to compete against each other to see who can get the high score and these whimsical games are fun for all ages. Since Toy Story Mania is so popular with guests, it tends to have long wait times on busy days in the park, making the indoor queue a great place to escape the heat for a little while. It’s also the only indoor attraction in Toy Story Land.

Sunset Boulevard in Disney’s Hollywood Studios features the ominous Hollywood Tower Hotel looming at the end, beckoning guests in with the sound of screams. The Twilight Zone Tower of Terror invites guests into the abandoned hotel where five guests mysteriously disappeared many years ago. Guests soon find themselves strapped into a service elevator and headed for a similar fate as stars in their very own episodes of The Twilight Zone. The Twilight Zone Tower of Terror is a great attraction to visit to keep cool in Disney’s Hollywood Studios as the preshow area, attraction, and part of the queue are all indoors.

Located right next door to The Twilight Zone Tower of Terror is another thrilling attraction that is mostly housed indoors. The Rock ‘n’ Roller Coaster Starring Aerosmith invites guests into G Force Records where the band is hard at work recording their next big hit. Guests find themselves invited to a concert across town and are soon strapped into super stretch limos rocketing through the neon lights of downtown. The Rock ‘n’ Roller Coaster is a great option to stay cool in Disney’s Hollywood Studios as the attraction, preshow, and large portion of the queue are housed indoors in air conditioning.

Editor’s Note: During the phased reopening of Walt Disney World, Star Wars Launch Bay is a “relaxation station.” While you can still explore the area, character greetings are temporarily suspended.

Disney’s Hollywood Studios the home of all things Star Wars. Star Wars fans who are looking to enjoy even more magic from the films and plenty of air conditioning can head over to the Star Wars Launch Bay in Disney’s Hollywood Studios to enjoy an exhibit featuring props, costumes, artwork, and models from the popular films. some brand new meet and greets which offer up-close encounters with characters from the film series. Encounter Kylo Ren at Star Wars Launch Bay offers guests the chance to decide whether they want to go to the dark side or stay strong and stick with the Resistance and meet Chewbacca. in an intense meet and greet that is sure to thrill guests. With plenty of items to look at, the Star Wars Launch Bay is sure to be a favorite of many guests as a place to cool off in Hollywood Studios! Guests looking for Star Wars adventures will want to head to Millenium Falcon: Smuggler’s Run. The attraction combines immersive storytelling with interactive gameplay to make guests the protagonists of their own Star Wars adventures in a way never before undertaken by Disney Parks. Lovingly described at various times as a “piece of junk” or “bucket of bolts,” the Millennium Falcon is the most famous of all Star Wars starships. On Millennium Falcon: Smugglers Run, guests 38 inches or taller climb aboard the Falcon in all her ramshackle glory and settle into the cockpit to operate “the fastest hunk of junk in the galaxy.” They could just discover the ship has a few surprises left in her, because the Millennium Falcon may not look like much, but she’s got it where it counts. Best of all, most of the queue and the attraction itself is inside offering a nice break in air conditioning.