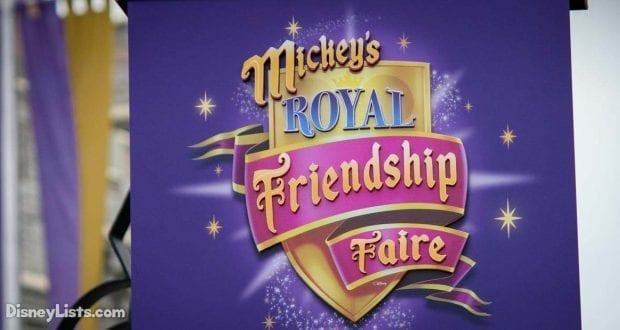 Posted by: Cindy E. Nykamp in Magic Kingdom, The Parks

Mickey’s Royal Friendship Faire, the stage show at Magic Kingdom in Walt Disney World, on the Cinderella Castle Forecourt Stage has been thrilling guests for years. The twenty-minute show plays multiple times per day. There is lots of dancing, story-telling, and fireworks. Read on to find out more about this fantastic stage show. (Also, be sure to check out all the pictures in the multiple slideshows).

Editor’s Note: During the phased reopening of Walt Disney World in 2020, Disney has temporarily suspended experiences, “that draw a crowd.” While stage shows were not mentioned, this show may be suspended during the reopening phase.

The show begins as Mickey, Minnie, Goofy, Donald, and Daisy have all come together to enjoy a royal friendship faire: a day of music, fun and celebrating. They’ve traveled far and wide to invite new friends to the festival.

First up, Goofy has invited Tiana and friends from the “Land of Bewitching Bayous” to bring a little spice and jazz to the party. At every show I attended, the crowd went wild for Tiana and Prince Naveen. The jazz dance numbers were great. I heard many in the crowd who were thrilled for Tiana. Her green and white dress would also make Tinkerbell jealous. The costuming department did a terrific job with her dress as well as all of the costumes throughout the show. The segment of the show features songs “Down in New Orleans” and “Dig a Little Deeper” from the movie. Tiana encourages Goofy to be himself and Goofy dances a fun jazz number.

Next, Donald Duck has brought some friends from the “Land of the Enchanted Woodlands” that he met at the Snuggly Duckling, even though Daisy actually invited Rapunzel and Flynn, not the “ruffians” that Donald brought. The ruffians and Donald get into a little bit of a tussle until Daisy calms things down. Daisy fears that Donald has ruined everything by bringing them until Rapunzel explains to Daisy that these boys have dreams too. Through a rendition of “I’ve Got a Dream,” Donald shares his dream to be “one of the fellas” and Daisy shares her dream to “try new things and make new friends.” Everyone leaves happy as friends.

Just when Minnie thought she needed to leave to get ready for the grand dance, Mickey announces that he has a surprise for her. Mickey has invited Olaf, Anna and Elsa from the “Land of the Mystic Mountains” to cool things off with a shortened rendition of “Let it Go” from Elsa. Elsa encourages everyone to never lose sight of being their own person.

Finally, the faire culminates in a grand dance which brings together all the characters for a final song with dancing and fireworks. Again the costuming department did a fabulous job on the classic characters’ outfits for this final segment. Tiana and Prince Naveen, Rapunzel and Flynn, along with the Ruffians, Anna, and Elsa, along with Olaf, each share a short dance. Finally, Sir Mickey and Lady Minnie join the stage for a final dance and song. Mickey then has one last surprise up his sleeve and sets off some fireworks to celebrate the new friendships they had made that day.

The crowds really enjoy this show. After multiple viewings of the show, I usually hear many in the crowd exclaiming how much they enjoy it. The show is a long one, clocking in around 22 minutes, but it’s worth it. Not surprisingly, the Forecourt Stage area is usually packed, especially towards the end of the show as many walking by pressed in as the show went on. If you want an unobstructed view, you’ll want to get to the stage area early. The show did well at blending the classic characters along with the latest hits from Disney: The Princess and the Frog, Tangled, and Frozen. The medieval faire theme also fits in perfectly with the surrounding castle. Currently, there are six shows playing per day. Be sure to check your times guide for the most up to date show times. You don’t want to miss this new show!