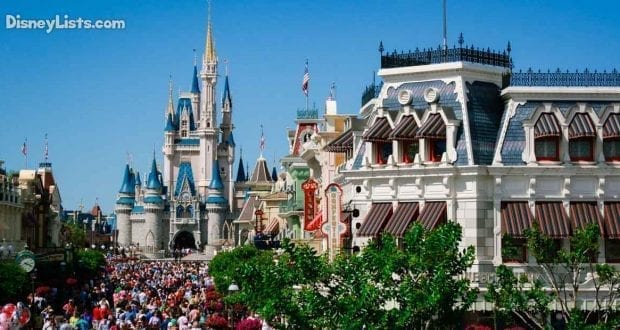 By far the most magical and popular theme park in Walt Disney World is the Magic Kingdom which is home to several lands filled with attractions, dining, shopping, and entertainment. Guests who spend time in the park can enjoy experiences like soaring high over Neverland with Peter Pan, blasting off into space, setting sail with pirates, rubbing elbows with ghosts, bouncing with Tigger, and defeating the Evil Emperor Zurg. With so many amazing experiences for guests to enjoy, it is no wonder why they spend so much time in the Magic Kingdom. While guests might think that they are pros at exploring the park, they might be making some rookie mistakes which can cost them time and energy. Here are the top rookie mistakes to avoid making when visiting the Magic Kingdom.

1 – Not Arriving for Early Opening

One of the biggest mistakes that rookies make in the Magic Kingdom is not arriving for early opening. The park opens its gates one hour before park opening. Guests are allowed to stroll up Main Street U.S.A and up to the Hub. This allows guests to get pictures, get some shopping done, and eat breakfast in the park without losing time otherwise spent on riding attractions. Arriving early is the only way to see the opening show, “Let the Magic Begin,” which opens the park 5 minutes before the posted opening time. A Royal Herald invites you to join Mickey and friends as they open the park in a magical way. This stage show still sets the tone for a special day at Magic Kingdom.

Editor’s Note: During the phased reopening of Walt Disney World in 2020, Disney has temporarily suspended experiences, “that draw a crowd.” While stage shows were not mentioned, this show may be suspended during the reopening phase.

In addition to booking FastPasses, guests should also book Advanced Dining Reservations to avoid making a rookie mistake. By not booking dining reservations to popular locations in the Magic Kingdom like Be Our Guest Restaurant and The Plaza Restaurant, guests run the risk of either being turned away from a fully booked restaurant or losing lots of time spent waiting for a table to become available.

Editor’s Note: During the phased reopening of Walt Disney World in 2020, existing dining reservations have been canceled through the end of 2020. A new 60-day booking window with reduced capacity will be rolled out soon.

Rookies in the Magic Kingdom often don’t know the advantages of using Extra Magic Hours. These special times in the park are open to Walt Disney World Resort guests and allow them to enter into one park per day an hour early and remain in another park up to three hours later than the general public. Extra Magic Hours are a great time to visit the Magic Kingdom as there are fewer crowds and lower wait times on popular attractions.

5 – Not Lining Up Early for the Parade

Each day the Magic Kingdom presents a magical parade. The Festival of Fantasy Parade runs each afternoon along Main Street, Liberty Square, and Frontierland and features whimsical floats with plenty of beloved Disney characters.  This parade should not be missed, and Magic Kingdom pros know the importance of finding a spot at least an hour before the parade is set to begin to ensure the perfect view.

Editor’s Note: During the phased reopening of Walt Disney World in 2020, the Festival of Fantasy parade is temporarily suspended.

6 – Not Watching Happily Ever After Nighttime Spectacular

No day in the Magic Kingdom is complete without a showing of Happily Ever After Nighttime Spectacular. The show takes place high in the skies above Cinderella Castle and combines beautiful fireworks, amazing projections of Disney movies, a flight by Tinkerbell, and Disney music for a beautiful experience. Guests who leave the Magic Kingdom before the show begins or simply choose to not pause and enjoy it are missing out on one of the most magical experiences in Walt Disney World! Those who want to enjoy the best views of Happily Ever After Nighttime Spectacular should plan on lining up on Main Street, especially in the Hub area, at least an hour before the show is set to begin. The best places to line up will be those with unobstructed views of Cinderella Castle. You’ll want to be able to see the projections on the castle! This is a show not to miss! 7 – Not Staying For the Kiss Goodnight

While many guests think that the nighttime entertainment ends with Happily Ever After Nighttime Spectacular, Disney pros know that there is an extra experience that comes after the park officially closes. The Kiss Goodnight is a beautiful presentation that occurs at Cinderella Castle about a half-hour after the Magic Kingdom closes. The show combines a special lighting package with a moving speech that reminds guests of the meaning behind the park and thanks them for spending their time there. The subdued and beautiful Kiss Goodnight is the perfect way to end a magical day in the Magic Kingdom.