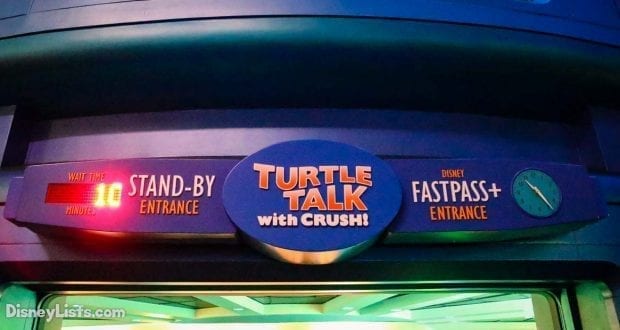 Turtle Talk with Crush really is one of my favorite attractions. I am always mesmerized at the talent of the performer(s) as well as the amazing way that Crush always answers all of the questions. The show is never dull, and it always seems like it flies by, and I always want to come back and experience more. Here are 6 great facts and secrets about Turtle Talk with Crush that you will definitely want to read:

6 – The attraction was original to Walt Disney World.

This attraction first opened on November 16, 2004, at the pavilion in Future World at Epcot called The Seas with Nemo & Friends. It was one of the new attractions added when the entire pavilion received the new theme, including Nemo and his friends, and other attractions were changed to incorporate these characters. The attraction quickly became very popular, so it ended up being duplicated and added to Disney’s California Adventure (2005), Hong Kong Disneyland (2008), and Tokyo Disney Sea (2009).

5 – First attraction to be donated to a non-Disney environment.

Walt Disney Imagineering created a replica of the attraction and donated it to Children’s Hospital of Orange County, Bill Holmes Hospital in Orlando, Florida. It was donated in 2013 so that the child patients and their families could have a little bit of Disney magic and joy while the kids are dealing with the medical issues that brought them there. The show is typically performed twice a day by volunteer cast members who donate their time to bring smiles to these kids and their families faces. It is just another reason why I can’t love Disney enough! Guests are always skeptical over what is scripted and what really is improvisation, but this show is definitely improvisation-based. The format of the show is roughly the same, and you may hear some of the same jokes if you repeatedly visit the show, but the questions that the kids ask are random and different. The cast members that perform the show have to be extremely knowledgeable about turtles to answer a wide variety of questions on the fly and in the same voice and manner of speech at Crush. I am always impressed by the show and love seeing what we will hear each time.

When you enter the attraction, you will notice a large screen that serves as the “Window to the Pacific.” This screen is actually a large rear-projection screen that displays the ocean environment to the audience and displays the character animations and movements. The actor on the other side can’t see through the screen to the audience, but there are cameras mounted around the theater so that the actor can see who they are interacting with during the show.

2 – The technology that is used is extremely impressive.

You may be wondering how they create Crush on the big screen. The animated image is displayed on the screen and moves based on the actor’s movements. This is done using digital puppetry that is incorporated into the show. The voice is perfectly lip-synched based on what the actor is saying and is projected at 60 frames per second, so it looks spot on every time. This is another reason why the show is different every time, as Crush’s entire body responds and reacts to the vibe from the audience and the questions that are asked, plus the different actors that may make him move around in different ways.

1 – Ask where Dory is (and other characters).

Crush isn’t the only character that will appear. If you ask about some of the other characters from the show, you will find that some of them may appear during the show to appeal to the questions about them. We have seen this with a Dory scene, where a child asked about Dory, and later in the show, Dory came on screen and tried to speak whale with the guests at the show. It is a lot of fun and makes the show feel even more real and unrehearsed. This experience completely brought the show to life for us.