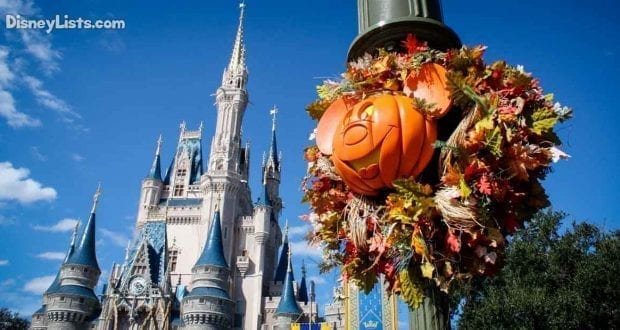 Peak Season may be over and the crowds at Disney World may be (a little) smaller, but that doesn’t mean the news has stopped. Lots of stories out of WDW lately and the myriad of special events this time of year brings are starting up. Construction is in full swing around the world with many projects beyond the Hollywood Studios expansion getting started. Sadly, sometimes “in with the new” means we also have “out with the old” and Disney has announced more closures including the end of a very unique water park attraction. Opening date for a new show looks set and more in this edition of the News Roundup.

The most wonderful time of the year is back! No, it’s not Christmas. It’s the Food & Wine Festival at Epcot and the 2016 version is underway with new things to sample and new experiences to try. The Epcot International Food & Wine Festival is an amazing feast for the senses with dozens of kiosks serving food and drink selections from around the world. There are also cooking classes, special wine tastings, parties, celebrity chef appearances, and of course the Eat to the Beat concert series. It is our absolute favorite special event at Disney World! To find out more about everything the 2016 Epcot International Food & Wine Festival has to offer, check out the links below.

Tips for Making the Most of the Festival

2 – Mickey’s Not So Scary Halloween Party is in full Swing!

Also debuting over at Magic Kingdom is Mickey’s Not So Scary Halloween Party. This special event takes place select nights now through Halloween and features special Halloween themed entertainment such as a special fireworks show and the best parade Disney World offers (in our opinion)! The park is decorated from top to bottom and the characters are out for meet and greets in their very special costumes. Oh, and don’t forget the trick-or-treating. Don’t worry, as the name implies the entire night is very kid friendly.

The party starts and 7 pm goes all the way until the stroke of midnight. Special tickets are required. If you want to attend purchase tickets soon. Halloween night is already sold out!

For more information on Mickey’s Not So Scary Halloween Party check out the articles below.

Top 7 Tips for Mickey’s Not So Scary Halloween Party

As colors change along Main Street, U.S.A. with the onset of fall at Magic Kingdom Park, “Mickey’s Royal Friendship Faire” is also preparing to mark the season with enhancements to the show’s grand finale.

The finale scene in “Mickey’s Royal Friendship Faire” will feature new costumes, décor and choreography. You’ll also hear an original song celebrating autumn, from the songwriting duo of Valerie Vigoda and Brendan Milburn who composed the show’s catchy tune “On This Day.”

As part of the upcoming expansion of Typhoon Lagoon which will feature a brand new family raft attraction (read more here), Shark Reef will be closing for good. Shark Reef was a unique water park attraction that allowed guests the opportunity to snorkel through a pool with numerous fish, stingrays and sharks. Part of our top 5 water park attractions, we’re sad to see this one go. For the full story, click here.

Disney World has released October operating hours for Animal Kingdom and it appears to be good news for fans of the Nighttime Awakenings offerings with debuted this summer. Animal Kingdom will be open until 8:30 pm during the month of October which will put the close of the park well after dark. If you haven’t experienced Animal Kingdom after dark, we highly recommend it. It is an entirely park at night with amazing beauty.

There has been some speculation that the long awaited Rivers of Light may finally make its debut. The highly anticipated and ambitious nighttime spectacular (similar to Illuminations at Epcot) has been plagued by troubles and delays. While this is merely speculation at this point, it is consistent with earlier reports we were given on the timeframe of its possible premier.

Over at Hollywood Studios, the (very cool) evening fireworks show, Star Wars – A Galactic Spectacular will move from nightly performances to operation four nights a week as October hours are reduced. The show will be dark on Sunday and Thursday evenings. If you are planning on catching the show in October, please check your times guide upon arrival as show times and dates are subject to change without notice. The Fall Time Petit Cake will materialize at Amorette’s Patisserie from September 11 to November 10. Designed to look like a charming birch tree with a lovingly carved “A” for Amorette’s, this cake features delicious layers of baked apple, salted caramel, milk jam and spiced chiffon cake.

At D-Luxe Burger, a Caramel Apple Shake will be available from October 1 – November 10. The creamy vanilla gelato base is perfectly complemented with tart green apple and sweet caramel flavors before being topped with whipped cream and a caramel drizzle.

These frightfully delicious sweets are only available for a limited time, so be sure to try them while you can!

1900 Park Fare, located at the Grand Floridian Resort & Spa, will once again be offering a limited engagement Holliday Brunch this year. Featuring appearances by character from Winnie the Pooh and Alice in Wonderland, an all you care to eat buffet and omelet station, the Holiday Brunch will run from November 20-26, 2016 and December 18, 2016 through January 1, 2017. Prices are $37 for adults and $22 for children ages 3-9. The special Holiday Brunch will be included in the Disney Dining Plan.

Liberty Square is getting an entertaining and educational new show called “The Muppets Present . . . Great Moments in American History.” This show will be unique in that it will take place in the second floor windows of the buildings around Liberty Square. Adding to the fun, the Muppets will interact with guests in the square. According to internal reports, the show is scheduled to debut on October 2, 2016. This date has not yet been publically announced by Disney World.

For guests wishing to hit Disney Springs after their day at the park for some shopping, dining or drinks, things just got a little easier. Disney has added bus service from the parks to Disney Springs starting each day at 4 pm. However, please note that the bus service is one way only. Guests wishing to get back to the parks will still need to take a bus from Disney Springs to a resort and then transfer to a park bound bus. This, of course, will help prevent those trying to get around the parking fee at the four parks.

Height test balloons were spotted recently at Caribbean Beach Resort indicating that an addition to the resort is likely coming. We reported several weeks ago that Disney Vacation Club would be expanding for the first time into the moderate resort class (read the full story here). Height test balloon are exactly what they sound like. They are large balloons flown at specific heights to test sight lines of new structures. Imaginers use these to test if/how visible new structures are from other areas around property. This is critical in maintaining the atmosphere of the uniquely themed areas.

Smokers should be aware that Disney has recently made changes to the designated smoking areas at both parks. At Magic Kingdom, the smoking area near the bridge to Adventureland and the area near Space Mountain have both been removed. The two remaining smoking areas are the path between Tomorrowland and Storybook Circus and across from Big Thunder Mountain Railroad. In Epcot, the smoking areas near Morocco, the International Gateway and Mexico have been removed. Guests at Epcot are allowed to smoke in designated areas near Mission Space, The Land, between Norway and China, Italy and France (which makes sense if you’ve ever visited Paris). Please note, smoking is strictly limited to these areas and that policy is strictly enforced.

Always looking for ways to serve guests better (and fill the awkward space at the exit of Space Mountain), Disney is now testing a second Guest Relations location in the Tomorrowland Light & Power Co. adjacent to Space Mountain. This is in addition to the Guest Relations location at City Hall on Main Street USA. The same services are available at both locations including help with tickets, dining reservations, etc. This is expected to be a limited time test.

Upcoming refurbishments of note include:

Disney Springs Town Center district has a new offering with the opening of the massive Levi’s store. Besides being located at Disney World, how could Levi’s be even more magical than they already are you might be asking? How about customizable Levi’s? The new store is one of only a handful worldwide to include a Taylor Shop for onsite customizations. You can make your Levi’s uniquely you with a variety of available patches, embroidery options and more.

A great man’s dream will continue to be dishonored as trailers for the upcoming release of Dr. Strange will begin showing in the One Man’s Dream theater starting October 7,2016. Previews of the upcoming theatrical release (which are frankly nothing special and available anywhere in the world online) will be shown in place of the film One Man’s Dream which celebrates the life, vision and accomplishments of Walt Disney, the amazing man who made this all possible. Yeah, make total sense.