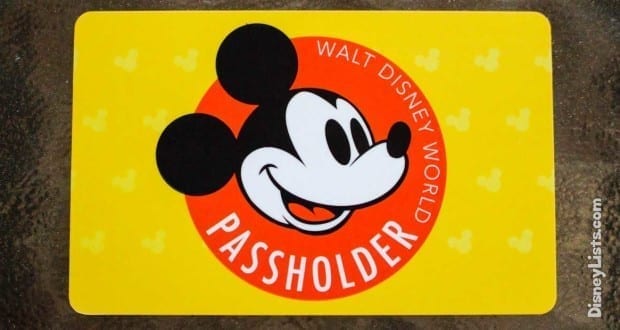 In celebration of Magic Kingdom’s 45th Anniversary, the Disney World Resort is offering Annual Passholder expanded dining and merchandise benefits along with a free month! These are the broadest and deepest discounts for Annual Passholders we’ve seen in over 10 years at least. Details below.

Guest who purchase a 12-month pass will now get 13 moths of park entry for the price of 12. New passes (or renewals) must be purchased between October 2, 2016 and January 3, 2017. Prices vary on the pass type selected – Weekday Select, Silver, Gold, Platinum, Platinum Plus.

Disney World is also offering expanded dining and merchandise benefits. From now through September 30, 2017, your Disney World annual pass makes you eligible for 20% discounts at 45 dining locations. Not only is this a higher than normal discount, but the discount is available for all meals (usually only lunch) and the list of restaurants includes many more locations as well as many counter service locations!

RELATED ARTICLE: 11 Reasons You, Yes You, Should Get an Annual Pass

Can I say something crazy? I know, you love crazy. If you are going to be at Disney World for at least a week, you’ll be surprised to know that an annual pass is probably your best option. If you spend a week at Disney once a year, you’re crazy not to get an annual pass. Why? It’s mostly math. You can argue with math, but you will lose.

For the sake of argument, let’s assume that we’re talking about a weekend to weekend trip with 7 days spent in the park. Let’s also assume that you have to choose between purchasing an Platinum Plus Annual Pass at $829 and a 7-day ticket with park hopper and the Water Park & More option (because park hopper is awesome and you should) which will cost $495. Let’s also assume that like most people you plan to eat during the week (also something you should do) and you are going to want at least a few mementos of your trip.

One of the most recent perks added to the annual passes is the addition of Photopass Memory Maker. This allows you to download all photos taken during your trip by Disney Photopass Photographers and on rides. Disney photographers are stationed pretty much everywhere but the restrooms to capture the moments of your special time. While this may not be something you would normally choose to purchase a few great pictures and it may become something you learn to love. Now that Memory Maker is included with annual passes I’ve been shocked by how many times I’ve heard people say (myself included), “I never thought much about it, but now that we have it we love it. We use it all the time.” This saves $149 per trip off the advanced purchase price.

10 – Save Money on Your Tickets

If you plan to make an annual pilgrimage to Disney World, you can save significant money by opting for the annual passing and using one simple scheduling strategy that we used. Plan two of those trip at once and make them 51 weeks (or less) apart. By doing this you are still vacationing once per year buy you’re getting two trips on one annual pass. Let your pass expire and repeat a year later. This will save you $161 per ticket and that doesn’t factor in price increases down the road.

9 – Save Money on Your Hotel Room

For all but the busiest times of the year, pass holders can usually get a nice discount at Disney hotels. Depending on when and where you are staying, this discount alone could pay for half or more of the pass and will easily cover the extra $334 over a regular ticket.

8 – Save Money on Parking

Not staying on property? That’s okay. There’s big money to be saved for you too. Each of those 7 days at the parks would normally cost you $20 for parking, but not for pass holders. Pass holders park for free which will save you $140 on your 7 days in the parks. Use Photo pass while you’re in the park and you’ve covered nearly covered the $334 difference right there.

7 – Save Money on Merchandise

In the past, Pass holders have received a 10% discount at most merchandise locations around property including World of Disney. From October 1-September 20, 2016, the merchandise discount has been raised to 20% in celebration of the 45th Anniversary of the Walt Disney World Resort. Disney merchandise isn’t cheap so this really helps. Depending on your budget for these types of items, this discount could really add up. If you’re like us it’s the equivalent of getting a part time job.

6 – Save Money on Dining

My favorite perk of being an annual pass holder is the dining discount. Discounts are usually at table service locations and are usually 10%. Again, Disney table service isn’t cheap, but it’s a great part of the vacation experience. For an average family of 4 eating on property this will probably save you $15-30 per meal. A list of current dining discounts will come with your pass, but since it’s always changing it’s best to just ask at every meal.

5 – Save Money on a Bunch of Other Stuff Too

Besides the big everyday discounts above, there are a lot of other ways to save money with a pass. Whether it’s treatments at on property spas, sports and recreation activities, or special event tickets like the Halloween Party, it seems like almost every opportunity Disney offers as some sort of discount attached to it.

Disney does a great job of a providing little extras that are hard to put a price tag on, but work well at making you feel like an insider. There are pass holder days for the Halloween and Christmas parties. Pass holder days at Braves spring training games. A quarterly magazine full of good stuff. Pass holders usually get sneak peaks on new attractions (we got to ride Ariel’s Undersea Adventure before it opened to the public). Pass holders also get early access to hard to get events such as RunDisney races. Finally, for all the collectors out there, Pass holders are able to purchase exclusive Disney Pins for special events and other celebrations. Have a free weekend and some extra airline and hotel points? Why not make an unplanned trip to Disney World? With an annual pass the park is yours to enjoy any time you get the itch.

If you’ve never been to Disney it will be a little harder to understand this, but take my word for it. Medieval torture chambers never came up with a device more excruciating than arriving at Disney World mid-afternoon but not being able to go to the parks because you don’t want to burn one day of your ticket on a half day. I want to get going right away. If the airline could parachute me onto Tower of Terror that would be even better. With an annual pass you don’t need to worry about burning a day. It’s included. Just go. Have fun.

Most people don’t realize that when William Wallace uttered that spine tingling cry of “Freeeeedoooom” he was actually confessing to the number one reason he got Disney World annual passes. I agree. In my opinion this is my favorite AP benefit and it’s one that’s not listed on the website. An annual pass gives you the freedom to stop worrying about getting your money’s worth. You aren’t assigning a dollar value to every day of a park ticket so you don’t have to feel like you’re obligated to go go go all day. Once we got an annual pass, I stopped worrying about sleeping in a couple mornings or leaving in the afternoon to swim.

An annual pass is so worth it, and it’s the right choice for most guests. Get a discount on your room, eat a few table service meals and buy some souvenirs and you’ve made up the difference in cost. If you come once a year or more it’s a no brainer. But even if you’ll only be here for a week every few years, when you add up all the discounts the pass often times pays for itself.

MONEY SAVING TIP: All the discounts listed above only require one person in the party to have a pass. If you won’t be able to get two trips in on one pass, then buy the annual pass for one person and get regular tickets for everyone else. Your group won’t get to enjoy a lot of the other benefits, but your family will save a lot of money this way.