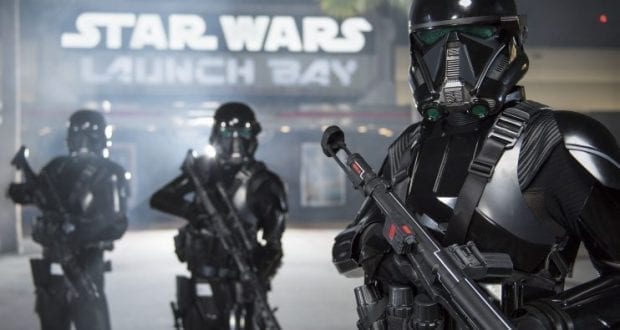 In anticipation of growing Star Wars mania with the release of Rogue One: A Star Wars Story, Disney has announced new Star Wars inspired additions coming to Disney’s Hollywood Studios mid-December. We’ve got all the details on the new additions below.

Disney has added a new tour with VIP access that will debut in 2017. Here are all the details from Disney:

Blast off on a jet-packed, 7-hour adventure featuring all the Star Wars action!

If it’s your destiny to discover all the Star Wars adventures at Disney’s Hollywood Studios, this experience could be a real time “saber.”

With VIP access, unparalleled by any other galaxy—this guided voyage will have you:

There are so many exciting Star Wars experiences at Disney’s Hollywood Studios. Launch off on this R2D-tour to discover it all in just one day!

The price is surprisingly not completely out of this world at $129 per person (all ages). Considering this includes the Star Wars: A Galactic Spectacular Dessert Party priced at $69 per adult (and $39 for children), this isn’t that much more for guaranteed Jedi Training and guided tours of all things Star Wars. If you or your family is crazy for Star Wars, then this tour might just be for you! Admission to Hollywood Studios is not included in the tour. Tours begin January 2, 2017 and will be offered on Mondays and Saturdays throughout 2017. Reservations for January tours can be made soon.

While fans eagerly await the coming of Star Wars Land (which feels far, far away), Disney has created a new Star Wars attraction to help bridge the gap and keep the excitement going following the release of Force Awakens. Star Wars fans will want to make sure they stop here to see some really cool items from the Star Wars universe and take advantage of some great photo opportunities. Here are 7 things you need to know about the Star Wars Launch Bay in Hollywood Studios.

1 – Queue Area is Out of This World

Upon arrival you’ll be directed into a queue area for the film that is full of artwork showing various scenes and characters from the Star Wars universe as well as a variety of movie promotional posters from the first six episodes of the saga. The colorful backlit artwork is part of an overall film reel that wraps around the walls. You’ll have plenty to look at while you wait to enter the Launch Bay Theater and some selfie opportunities in front of your favorite scenes and characters.

Note: You do not need to stand in line to enter the Launch Bay. The queue is for the short film. If you do not want to see the movie, you can stay right and enter through a door that bypasses the theater and will get you straight to the exhibit gallery area (#3).

This 10-minute film includes commentary from key Star Wars producers, directors, writers, crew and story tellers responsible for bringing the Star Wars galaxy to life. You’ll hear personal stories centered around how the Star Wars films impacted their desires to work in the film industry, the cutting edge technology of the first Star Wars film, and how the story is what drives the future of the franchise. We enjoyed this film. Hard core fans will probably want to view it at least one time if not more. For most guests, after one viewing you probably don’t need to see the film again.

After exiting the theater you’ll enter the Celebration Gallery, an exhibit area full of replica props, models, costumes and artifacts from the Star Wars films. Highlighted are the Rebel Alliance and the Galactic Empire. You’ll pick up some interesting information about items you see in the films. New in December 2016 is props from the movie Rogue One: A Star Wars Story. The props are not just limited to this one room. You’ll find other items scattered around the Launch Bay as you move through the different areas. The Preview Gallery, located just outside of Launch Bay Cargo (#7), features items from Star Wars: The Force Awakens, including a model of the Millennium Falcon.

Get your camera’s ready! You won’t want to miss the opportunity to meet fan favorites Chewbacca and Kylo Ren! Each character has his own meeting area. Chewbacca’s queue features different helmets from the Rebel Alliance. Kylo Ren’s queue area includes different helmets that are seen on the Empire characters. Wait times for the characters will vary and were running 15-30 minutes the day we visited (which was busier than normal).

If you have a gamer in the family, then be sure to check out the gaming area in the Launch bay. You can play the popular Disney Infinity video game, which features an exclusive Toy Box built just for Star Wars Launch Bay. We also saw Star Wars Angry Birds and other fun games that you can play with your friends and family. Game play is free.

Be sure to visit the area reminiscent of the famous Mos Eisley Cantina! The stage is set so you can pretend to be an alien scoundrel and play holographic chess. Sit at a Sabacc table or stand at the bar and clutch your favorite-a glass of blue bantha milk! This fun area is full of photo opportunities. You may even run into a jawa who will be happy to stop for a picture–just be sure they don’t try to steal you away to sell you to a new master.

Finally, you’ll find the Launch Bay Cargo. There is a wide selection of Star Wars merchandise, including original artwork. The most amazing merchandise is probably the replica costumes! You can purchase a Han Solo costume for $725 or a “at-at” costume for $2750. A Darth Vader helmet is $675, but the body costume is $4000! Don’t worry, there are plenty of options that are a little more down to earth. You’ll also find Star Wars Magic Bands (customization is available) and a wide variety of phone cases. This store is considerably smaller than Watto’s Grotto and Tatooine Traders, but has some different choices.

Star Wars Launch Bay was a pleasant surprise. When we first learned of the addition, honestly, we didn’t expect much. We expected a half effort on a temporary attraction along the lines of Watto’s Grotto (which we felt was rushed, done on the cheap and fell far below normal Disney Standards). However, what we found was a well produced and built out experience that is definitely worth a visit.