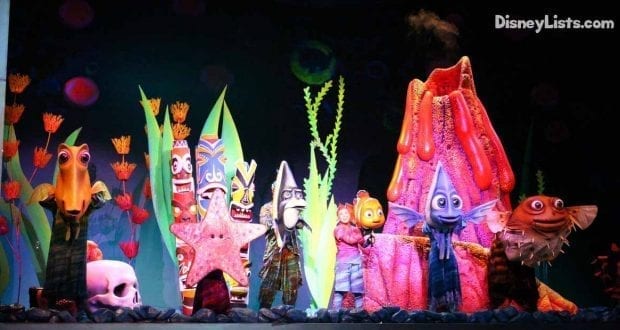 Finding Nemo the Musical is an amazing show located right next to the Dino-Rama area within Dinoland U.S.A. (even though the theater has never housed any dinosaurs).  This is definitely one that you don’t want to miss for many reasons.  Even if you have seen the show, you may not know these fun facts and secrets about the show:

Editor’s Note: During the phased reopening of Walt Disney World in 2020, live shows might have adjusted showtimes and reduced capacity.

8 – The theater was part of Animal Kingdom’s grand opening, and was quite different.

The theater where the show takes place is called Theater in the Wild.  The theater was built and operational when Disney’s Animal Kingdom first opened on April 22, 1998 (which is also Earth Day).  The theater also used to be an amphitheater and was outdoors, but has since been closed in once Finding Nemo the Musical was created, so that the elements would be more conducive to being part of the underwater scene.  It would be hard to feel as if you were in an underwater environment if you still had trees and all of the other scenery in the background! 7 – The Jungle Book opened the theater.

When the theater and Disney’s Animal Kingdom first opened, the show that was hosted there was called Journey into Jungle Book.  The show was full of all of the amazing songs from the movie and various puppets to perform the show.  The puppets that were used were very new at that time as they were puppets that looked a little more lifelike and expressed emotion with their facial expressions, which was new for Disney puppets when this show opened.  The show ran from park opening in 1998 to April of 1999.

6 – It’s in the largest theater at Animal Kingdom.

Theater in the Wild holds about 1,500 guests at a time, which is great for getting a lot of guests in to see the show.  The seating is all fully inside and in the air conditioning, so if you need a break from the sun and heat, that is just another great reason to venture in to see the show!  Just remember that the wait to get into the theater is outside and mostly in the sun, so check times for when to show up.

After Journey into Jungle Book closed, Tarzan took over the stage.  It was a musical show featuring the music and characters from the movie.  There were also a lot of stunts and unique performances associated with the show.  There were gymnasts, roller blade performers and many stunts with a stage that wrapped around sections of the guest so you were immersed in the fun!  The show was called Tarzan Rocks! and it ran from July of 1999 through January of 2006 when it closed to make room for Finding Nemo the Musical to take the stage. If you think back on Finding Nemo, you will remember that the movie wasn’t at all a musical.  There really wasn’t a lot of songs in the movie and it was more about the story.  That means that most of the songs in the musical are originals that were created just for this stage version of the show, so you and your family will likely leave with some new songs stuck in your head!  This is the first time that Disney had made a musical stage show from a non-musical film.

3 – It really is a Broadway quality show.

Disney pulled out all stops and brought in the best to help create this show. Peter Brosius is the one responsible for directing the show.  He is an award-winning director on Broadway, so he was definitely qualified for the task!  Robert and Kristen Lopez (a husband/wife team) composed all of the original songs for the show.  You may recognize their names from their work on “Avenue Q” and “Along the Way” if you are into the Broadway scene, or Frozen if you are a Disney junkie.  The designer for the puppet and production components is Michael Curry, who also designed the puppets for the stage version of The Lion King on Broadway.  This was quite the team, and it explains why the show is so perfect and a great version of the story. 2 – Some of the puppets in the show are the size of real cars.