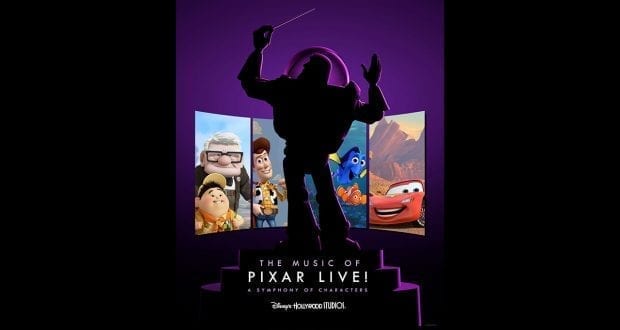 We love Disney World stage shows so we were excited to read Disney World’s announcement that a brand new live stage show is coming to Disney’s Hollywood Studios this summer. This is a much needed addition to Hollywood Studios as construction has decreased the number of attraction and entertainment options at the park. More details about the new show are below.

This summer, Disney’s Hollywood Studios will present “The Music of Pixar LIVE! A Symphony of Characters.” This limited-time concert event will showcase memorable music from Pixar Animation Studios films, complete with a live orchestra and appearances by beloved Disney•Pixar characters.

Starting May 26, “The Music of Pixar LIVE!” will be presented three times nightly at Theater of the Stars at Disney’s Hollywood Studios (following the regular daily performances of “Beauty and the Beast – Live on Stage”). The show will also feature highlights from some of Pixar’s greatest scores, from films like “Toy Story” to “Cars 3.” Guests can also expect appearances by Woody, Jessie, Mike and Sulley, the Incredibles and more.

We’re very excited to see this new show! What about you?

Pixar films have completely captured our hearts, and we are so glad that they are a part of the Disney family.  The Pixar shorts have become extremely popular and are great “mini” films on their own.  The Magic Eye Theater at the Imagination pavilion in Epcot has had a few different shows over the years, and has been part of Epcot since it first opened to guests.  Here are 6 great facts and secrets about the attraction:

6 – This is a relatively new addition to the pavilion.

Guests who are new to Walt Disney World may not realize this, but the Disney & Pixar Short Film Festival hasn’t been in operation at Epcot very long.  The theater has been there, but not this particular show.  The show first opened on December 23, 2015 and maintains its place in the theater today.  We would expect that the show will probably be around for a little while based on the track record for the theater.

5 – Magic Journeys was the opening attraction in the same theater.

The theater first opened on October 1, 1982 the same day that Epcot (then known as Walt Disney World’s Epcot Center) opened to receive guests for the first time.  When the theater opened, Magic Journeys is the show that opened for guests to see.  The premise for the show is the ability to look at the world a different way, in a more child-like way.  Various items would transform into other items to create a new scene.  The attraction featured a song, “Making’ Memories”, which was written by Robert and Richard Sherman, who were the composers Walt Disney worked with personally to create music for many movies and attractions.  The show was permanently closed on February 9, 1986 in order to make changes to open a new show. 4 – Captain EO gets a two-time tour at the theater.

Captain EO is the show that replaced Magic Journeys.  The show officially opened on September 12, 1986 for the first time.  The show was created by George Lucas and takes the audience into space and the world of science fiction.  It is a 3D film that features Muppet-like science fiction characters along with featuring Michael Jackson as the star of the show.  He sings, dances and serves as the main actor/performer in the entire show.  The show ran for the first time until July 6, 1994.  After Michael Jackson passed away unexpectedly in June of 2009, Disney decided to revive Captain EO as a tribute to the King of Pop.  The show reopened on July 2, 2010 and ran until December 6, 2015 when it closed in order for the Disney & Pixar Short Film Festival to begin. Very interestingly, at the time the film for this movie was created, it was the most expensive film every created.  It cost $30 million to create 13 minutes of film, which was roughly $1.76 million per minute.

3 – Honey, I Shrunk the Audience

We all remember that incredibly fun movie, Honey I Shrunk the Kids, right?  After Captain EO closed the first time, it was to make room for a show that was related to the movie called Honey, I Shrunk the Audience.  The show opened on November 21, 1994 and using the huge screen and special effects in the theater helped to create the feeling that the entire audience was shrunk by the shrinking gun and let the audience feel what it might be like to be shrunk down to a size smaller than an ant.  Have no fear, your size is restored before you leave the theater so you can enjoy the rest of your day!  The show ended on May 9, 2010 for Captain EO to return to the theater again.

2 – The theater has built in hydraulics under the seats.

The entire theater is extremely impressive.  There are hydraulics built in under the seats that allow the seats to shake and make various movements, to sync up with the show.  It helps to make the experience more immersive and feel like you are in the middle of the action.  It has been used in Honey, I Shrunk the Audience, Captain EO and now the Disney & Pixar Short Film Festival.  It is a really awesome and expensive way to entertain guests and give them a little bit of extra thrill with the show.

The shorts that are shown in the Magic Eye Theater are Get A Horse, For the Birds and La Luna.  These are shorts you may have seen on a Pixar Shorts collection or at the beginning of various Pixar films.  The shows are shown in what Disney calls 4D.  This is because the film is 3D, requiring that guests wear the 3D glasses.  The show also incorporates other elements and the technology and hydraulics in the theater to enhance the experience and help you use more of your senses to enjoy the show.