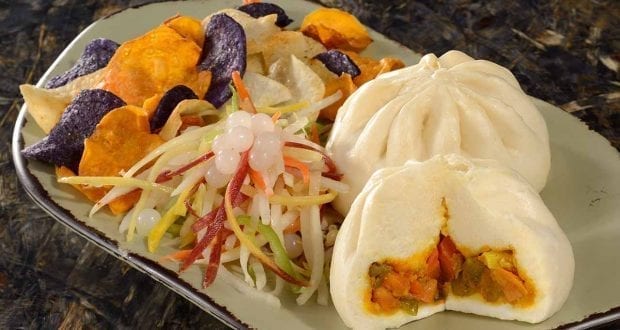 NEWS: First Look at Menu for Satu’li Canteen in Pandora-The World of Avatar

Disney has released some new information about one of the restaurants opening soon in Pandora-The World of Avatar. We can’t wait to try it. Read all about it below!

Here are all the details from Disney Cast Member Pam Brandon:

With an entire new land taking shape to open on May 27, Pandora – The World of Avatar at Disney’s Animal Kingdom will transport guests to the visually stunning land of floating mountains and bioluminescent plants. And of course there’s a culinary chapter to the story of the Na’vi.

Guests can enjoy creative, flavorful dishes based on the healthful bounty of Pandora, with wholesome grains, fresh vegetables and hearty proteins at Satu’li Canteen, where an on-stage grill is a prominent feature in the colorful dining room.

The Satu’li Canteen was once the main mess hall of the Resources Development Administration (RDA) base located in the Valley of Mo’ara. Now the canteen is owned and operated by Alpha Centauri Expeditions (ACE) tour company and has been redesigned into a beautiful museum-like dining room.

The interior has been transformed with colorful Na’vi items filling the walls and hanging from the ceiling — hand-woven tapestries, natural Pandoran elements and even cooking tools decorate the restaurant. Look for familiar dishes with a twist in the fast-casual restaurant, with bowls that allow diners to customize their lunch or dinner. Diners start with a base of quinoa and vegetable salad; red and sweet potato hash; mixed whole-grain and rice or romaine and kale salad. Next is either with wood-grilled chicken, slow-roasted beef, sustainable fish or chili-spiced fried tofu. And the bowl is finished with charred onion chimichurri, black bean vinaigrette or creamy herb dressing.

For little ones, there’s an option of grilled chicken or beef, fish or tofu with greens or rice; a hot dog wrapped in Parker House dough; cheese quesadilla, or a steamed “pod” (cheeseburger bao bun).

The fast-casual restaurant will also be the first to offer Mobile Order, a new convenient option to order and pay for meals on-the-go within the My Disney Experience app, allowing guests to bypass the queue to order when they arrive at the restaurant. Using the app, guests can select menu items, customize their order and pre-pay for their meal. When they arrive at the restaurant they will tap an “I’m here” button in the app, which will notify the kitchen to prepare the meal. When ready, guests will be alerted through the app to pick up their meal at a designated window. Additional fast-casual and quick-service restaurants will begin to offer Mobile Order later this year.

Disney Dining Plan is accepted at Satu’li Canteen but, at this time, Mobile Order only accepts credit cards.

For more about Pandora: The World of Avatar read the related article below.

RELATED ARTICLE: Pandora – The World of Avatar: What You Need to Know About Disney’s Animal Kingdom’s New Land

Pandora – The World of Avatar… A place where Disney fans let their inner Avatar spirit go! It’s hard to contain our excitement about Animal Kingdom’s newest dimension of design and attractions. So, what’s all the hype about? Check out this “what you need to know” guide.

May 27, 2017 – the epic day that Pandora – The World of Avatar has been announced to open at Walt Disney World’s Animal Kingdom theme park. With construction beginning in January of 2014, it’s been a tease trying to make sense of the odd items erected in the previous Camp Minnie and Mickey location from behind the walls. We’re ready for what adventures Pandora holds! Great question! In 2009, a movie titled Avatar was released that beckoned the interest of movie goers making Avatar explode with popularity. The movie, written and directed by James Cameron, Avatar is a science fiction film about humans attempting to colonize on a habitable moon called Pandora. While living on Pandora sounds like a great opportunity for this cast of humans, they are met with resistance from the local tribe of Na’vi. The title “Avatar” comes into play when humans attempt to better understand the Na’vi tribe by using an Avatar (a created/manufactured body of a Na’vi person that their human, living soul can thrive in). Humans using their Avatars look like the Na’vi people so they can better attempt to fit in. Sounds strange, but it’s rather entertaining! If you haven’t had a chance to watch the movie, we recommend doing so before May 27.

Animal Kingdom unfolds the story of Avatar by bringing this lush, colorful, and intricately detailed moon known as Pandora to life! A valley nestled on Pandora known as the Valley of Mo’ara is where the discovery begins. Since Animal Kingdom is the hub of all things valued in nature, Pandora fits right in! The Na’vi people are especially one with nature which is obvious in how it plays a crucial role in all ways of their lives – just like Earth does for us. Walking through Animal Kingdom’s Pandora is said to provide guests of all ages an exotic adventure where the value of nature is supreme. Watch the short video below to see how the land of Pandora fits into the values of Disney’s Animal Kingdom.

It’s Disney, so right off the bat we expect great things! James Cameron and Joe Rohde, Senior VP Creative, Walt Disney Imagineering, have teamed up to blow us away. Disney Imagineers have stated that guests visiting Pandora should expect a visually stunning world complete with floating mountains, bioluminescent plants, immersive adventure, and experiences that comes to life when you interact with them. We expect a land that is both beautiful in day and at night, from overwhelmingly lush landscape that pops during the day and glimmering lights that illuminate the land at night. The latest technology and innovative expeditions take center stage in discrete yet subtle experiences. Our senses are heightened just thinking about it! Plus, Imagineers have announced there will be interesting creatures (possibly the Na’vi people?), themed dining, shopping opportunities…. and of course, new attractions! Watch a special behind the scenes video to learn of some of the amazing technology we can expect.

5 – Attractions We Know About

Information on three attractions has been released and we are SUPER excited about both of them!

This attraction sounds like it’s a little more on the thrilling side and will have health and height requirements. In the Avatar movie, we learn that as a rite of passage a person of the Na’vi tribe must climb aboard a banshee (a winged, dragon-like creature). Well, with the Avatar Flight of Passage attraction, guests will have the chance to fly through a simulation of having the wind in their hair on a tremendous flight on a banshee through Pandora!

Families are welcome on what sounds like a MUCH calmer attraction than that of the Flight of Passage. This attraction is a boat voyage on the Pandoran River encountering creatures and a Na’vi elder as your journey down the Na’vi River – a sacred river that flows through a bioluminescent rainforest! We expect this journey will be an especially beautiful and peaceful oasis.

Guests of all ages are invited to walk through the Valley of Mo’ara and discover a world like no other. This valley is marked its enormous floating mountains and will include exotic plants that come to life with beautiful bioluminescence each night. The area will include a Na’vi built drum circle, containing instruments playable by all, Na’vi totems and other cultural items, as well as brand-new Wilderness Explorers challenges and badges to collect.

6 – Dining We Know About

We now know that this restaurant will be a quick-service restaurant with some Disney Dining Plans accepted. From the Disney website:

Discover healthful dishes and familiar flavors from another world—wholesome grains, fresh vegetables and hearty proteins. tuck inside the Quonset-hut structure called Satu’li Canteen—long ago an RDA mess hall, now a peaceful dining facility adorned with Na’vi art and cultural items. Featuring international-inspired cuisine, vegetarian options and specialty libations, it’s the perfect place to refuel as you venture through the Valley of Mo’ara.

Drinks will be served up at Pongu Pongu which will be a lounge style option with some Disney Dining Plans accepted. From the Disney website:

Quench your thirst the Pandoran way at an otherworldly pit-stop offering Na’vi-inspired refreshment. Hike to the corner of Windtraders where you’ll find Pongu Pongu—when you spot a friendly expat serving out-of-this-world drinks, you’ve come to the right place. Meaning “Party Party” in the language of the Na’vi, Pongu Pongu welcomes weary travelers to try our bioluminescent frozen cocktail, indigenous beers—or even a sweet snack you won’t find elsewhere! What would a new land be without some shopping! Disney has released details on one merchandise location.

In this store, you’ll discover exotic merchandise and souvenirs celebrating the flora, fauna and culture of Pandora. The walls of the building have been overtaken by natural root structures, which now serve as display areas for a variety of mementos and other merchandise. You’ll find Na’vi cultural artifacts, animal toys, science kits, and Alpha Centauri Expeditions (ACE) apparel.

Walt Disney World will be providing glimpses into Pandora over the next couple of months, leading up to opening day. Plus, with three Avatar movie sequels on the way, we are sure the love for Pandora will continue to flourish at Disney’s Animal Kingdom for several years to come. Stay tuned!

Watch below for a six minute preview that aired on Nightline.