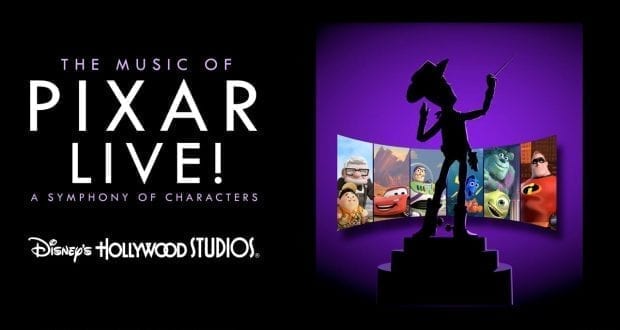 Last month Disney announced a special summer engagement of a brand new show, “The Music of Pixar Live!” that will be taking place at Disney’s Hollywood Studios. Dining packages are now available for guaranteed seating. Check out all of the details below.

Reservations are now available for “The Music of Pixar LIVE!” Dining Package, a delicious way to reserve your seats for the new “The Music of Pixar LIVE!” a limited-time concert event featuring memorable music from beloved Pixar films, which will take place three times nightly at Disney’s Hollywood Studios beginning May 26. With the Dining Package, guests will receive a voucher for reserved seating to redeem at the theater.

Make your evening even more magical by combining “The Music of Pixar LIVE!” and “Fantasmic!” Dining Package, which will include reserved seating for both the concert as well as the popular “Fantasmic!” nighttime spectacular.

Participating locations include Hollywood & Vine (Disney Junior Play ‘n Dine and Minnie’s Seasonal Dine), The Hollywood Brown Derby and Mama Melrose’s Ristorante Italiano. Dining must occur no later than 2.5 hours prior to show time or 1.25 hours after show time; vouchers can be picked up at the restaurant (if dining prior to show time) or at the theater (if dining after the show). “The Music of Pixar LIVE!” Dining Package is Disney Dining Plan eligible and counts as one (1) table-service entitlement for Hollywood & Vine and Mama Melrose’s Ristorante Italiano, two (2) table-service entitlements for The Hollywood Brown Derby.

Reservations are now available for dates beginning May 26 for The Music of Pixar LIVE! Dining Package, and can only be made by calling 407-WDW-DINE.

The Disney website also has some more information on the show. Here are more details:

Celebrate over 20 years of lyrical brilliance with music that’s made cinematic history!

Mike, Sully, Woody, Buzz and the gang are back! Beginning May 26, the Theater of the Stars at Disney’s Hollywood Studios welcomes The Music of Pixar, a philharmonic retrospective highlighting Pixar’s most memorable music—and with special appearances by the stars themselves, it’s sure to have attendees hitting the high notes!

This all-new, nightly concert series showcases a selection of unforgettable soundtrack favorites from Cars, Finding Nemo, Monsters, Inc., Toy Story and UP—all performed by a live orchestra. As the symphony plays, giant screens will feature a movie montage, outtakes and interview excerpts with the folks behind Pixar’s captivating music. And don’t be surprised to see some of the studio’s funniest characters stop by to steal the spotlight with their own brand of comedic relief. It’s an immersive, family-friendly experience fans won’t want to miss!

During the concert, video clips will provide insight into the creative process as Pixar filmmakers and composers collaborate on spot sessions, demos and orchestral recordings. Guests will gain a new understanding of why these beloved songs have the ability to spark memories and whisk movie-goers through a rollercoaster of emotions.

Please note: all entertainment and appearances are subject to change without notice.

We can’t wait for what we’re sure will be a fantastic show! Will you be going? Located in Tomorowland at Magic Kingdom, get ready to shake your hips with the stars from the Disney/Pixar film, The Incredibles. A DJ spins some great tunes while guests have a chance to dance with characters such as Mr. and Mrs. Incredible (Elastigirl) and Frozone. At the most recent Food and Wine Festival, Epcot had Remy’s Ratatouille Hide and Squeak which was an interactive scavenger hunt that took guests around the World Showcase in search for ingredients for none other than Remy’s signature dish, Ratatouille. This experience was a fun way to remember the Pixar/Disney Film, Ratatouille, and the cost was just under $10. Will this experience be back for the next Food and Wine Festival? We hope so!