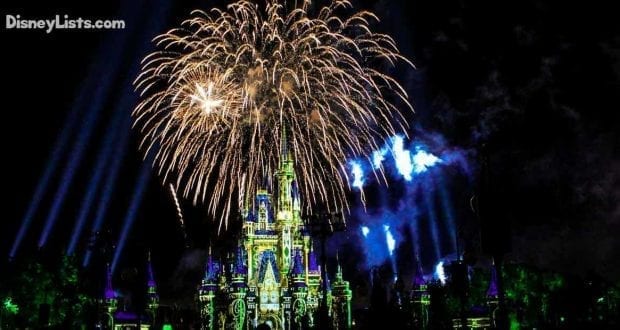 Posted by: Chad & Cindy Nykamp in Magic Kingdom, The Parks

Enjoying fireworks at Magic Kingdom is one of the highlights for many on their Walt Disney World vacation. On more than one occasion seeing fireworks behind Cinderella Castle has brought tears to my eyes. Happily Ever After, the nighttime spectacular at Magic Kingdom is the perfect way to end the day at the park. It perfectly combines Disney magic and storytelling that will touch even the hardest heart.  Read on below for all the details on this fantastic show.

1 – The Story of Happily Ever After

“Happily Ever After” is an entirely new kind of Disney storytelling, one that takes you on a journey filled with heart, humor, and emotion. Guests become part of the journey themselves as they follow favorite Disney characters on an adventure to seek out their destiny, face adversity, and ultimately fulfill their dreams on the road to their happily ever after. The story begins with scenes of fantastic dreams full of hope, wonder, magic, and light. Disney villains soon become part of the story, attempting to quash those beautiful dreams and forcing the heroes to fight for what they believe in. Overcoming their fears, the heroes triumph and are celebrated with spectacular fireworks. Because no Magic Kingdom Park fireworks display is complete without this little bit of magic, Tinker Bell flies across the night sky, reminding guests that with a bit of faith, trust, and pixie dust, everyone can find their own happily ever after. We followed Disney characters through their journey to find their happy endings, and we were encouraged to find our own throughout. In addition to fireworks, the show features more lasers, lights, and projections than any previous show at the Magic Kingdom. Characters and scenes from more than 25 Disney films are featured through state-of-the-art projections, enhanced by more than 50 choreographed spotlights and brilliant lasers. Disney Cast Member Jennifer Fickley-Baker gives more insight on this amazing technology:

While the “story” of the show is the most important part of “Happily Ever After,” how that story is told and choosing the right tools to tell it are essential in creating an unforgettable guest offering. One tool that Disney Parks Live Entertainment is excited to employ in “Happily Ever After” is the latest in projection mapping technology. The team first used projection mapping in 2010 with the launch of “The Magic, The Memories & You,” a nighttime show that combined guest-submitted photos with different colorful layouts that were projected onto Cinderella Castle. After more advancements were made in the field of projection mapping, a new show, “Celebrate the Magic,” debuted in 2012. Because of its successful use at the Walt Disney World Resort, the use of projection mapping technology then expanded to be used as an entertainment tool at Disney Parks around the world. Today, you can find projections enhancing must-see entertainment shows like “Star Wars: A Galactic Spectacular” and the seasonal “Jingle Bell: Jingle BAM!” show.

According to Show Director James Silson, projections are one of many invaluable storytelling tools used in “Happily Ever After,” in addition to new hand-drawn animation, an original score, and the latest in fireworks, lasers, and pyrotechnics. “With projection mapping technology, you can create an immersive environment for guests, taking them inside the films of Disney,” he said. “It enables us to flood the palate and give our guests an opportunity to experience many of our characters’ worlds in the same show.” To create the most technologically advanced projections for Cinderella Castle, Disney Parks Live Entertainment partnered with experts in the field to bring the show to life. According to Art Director Ryan Kravetz, working with Cinderella Castle as a canvas for these projections has been a dream-come-true project. “It’s not paper, it’s not a cell. The physical structure of this castle as our starting point is a really powerful medium to be using.”

There is no other way to describe it, the projections were terrific and are central to understanding the story of the show. Because of this, we highly recommend you secure your viewing spot on Main Street U.S.A. early in the evening. Disney Cast Members tape off viewing areas on Main Street and can guide you to viewing locations. With Wishes, you could pretty much enjoy most of the show from multiple locations throughout Magic Kingdom and even along the beaches of resorts on Seven Seas Lagoon. However, with Happily Ever After, while you’ll still be able to see the fireworks, you won’t really be able to “get” the show without viewing the castle projections. Simply put, to fully appreciate and enjoy this show, you must view it from Main Street U.S.A. or the Hub in front of Cinderella Castle.

3 – Newer Disney Films Have the Spotlight

The 18-minute spectacle features moments from numerous Disney and Pixar films stretching from the very early classics such as Peter Pan and Snow White, many of our childhood favorites including The Little Mermaid and Aladdin to modern blockbusters such as Frozen, Moana, and Zootopia. Cinderella Castle becomes part of the story itself, with dazzling projections bringing heartfelt Disney stories to life on and around the iconic 18-story-tall castle. Quasimodo from “Hunchback of Notre Dame” swings from the turrets. Woody and his pals from Disney Pixar’s “Toy Story” recreate the castle entirely out of toys. And Maleficent from “Sleeping Beauty” envelops the castle in her signature green flames.

Without question, this show is intended to include the favorites of the newest generation of Disney fans (which is a good thing) while paying homage to the timeless classics that have defined Disney for generations. While most of the films highlighted have been released in the last 25 years, there are still many scenes from the early days of Disney animation.

Completely absent from the show are the fab five (Mickey, Minnie, Goofy, Pluto, and Donald) and was lighter than most shows on Disney Princesses. It was very refreshing to see our new favorites, especially Tianna and Rapunzel. We also enjoyed seeing our favorite Pixar characters. The score for “Happily Ever After” was recorded by a 75-piece orchestra in London and includes tunes from a multitude of Disney movies, including “Aladdin,” “Brave,” “Tarzan,” “The Lion King,” and “The Princess and the Frog.” Cast Member Jennifer Fickley-Baker explains that “to help the audience feel the emotional journey of the story, specific pieces of the score were written to inspire feelings of excitement, adversity, friendship, triumph and much more. The show also features plenty of Disney music, which the team says was a fun challenge to take on, since tunes from the Disney music library are incredibly diverse since they were created by different composers in various styles and genres.” The theme song, “Happily Ever After,” is sung by country music artist Angie Keilhauer and singer Jordan Fisher. The song encourages people to find the courage to reach for their own “happily ever afters” and features a full orchestra and 90-voice gospel choir to create a fantastic song.

We really enjoyed the music, particularly some new arrangements of some familiar songs. The “love” section of the show features a fantastic new rendition of “Love is an Open Door,” from “Frozen,” “You’ll Be in My Heart,” from “Tarzan” and ends with the beautiful duet of Rapunzel and Flynn Ryder from “Tangled” singing, “I See the Light” while floating lanterns stream upon the castle. Cindy, ever the romantic, got a bit choked up at this point! This nighttime spectacular is fantastic and loved by many. We love it. It’s great to see the current generation of kids connecting with the characters and stories they’ve been enjoying over the last decade and a half. The show blends classic fireworks, with amazing technology and doesn’t lose that human touch of emotional storytelling. You don’t want to miss this one!

Throwing it back to spookier times! #nightmarebefo