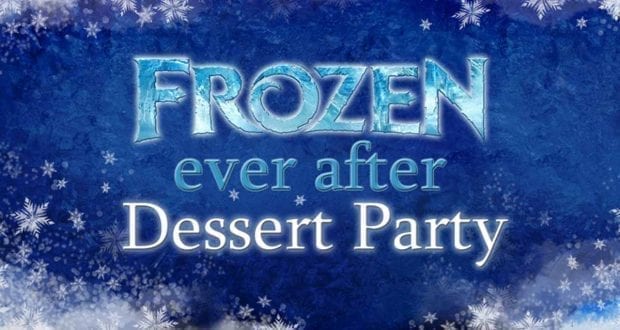 A new “Frozen Ever After Dessert Party” will be replacing Illuminations Sparkling Dessert Party at Epcot later this summer. This party will not only provide amazing desserts and viewing of the Illuminations Fireworks at Epcot, but it will also give special after hours access to Frozen Ever After. Nearing in on its one year opening anniversary, Frozen Ever After, is as popular as ever with wait times still posting anywhere from 90-120 minutes. Offering special access to the attraction along with a dessert party is sure to gather up excitement and ticket sales. Read about all the details below.

The party will be similar to the current Illuminations Sparkling Dessert Party. Guests will still go to the designated viewing area for Illuminations: Reflections of Earth next to the FastPass location at the front of World Showcase. A wide variety of desserts and drinks will be offered along with the special viewing of the show. After Illuminations guests will then be able to enjoy a ride on Frozen Ever After, after the attraction has been officially closed for the day.

The party, which takes place in World Showcase Plaza East, overlooking World Showcase Lagoon, will feature décor, drinks, desserts and snacks inspired by the beloved film, “Frozen.” Don’t worry about staking out the perfect spot to view the fireworks, because Frozen Ever After Dessert Party guests will have reserved seating. Sip on specialty cotton candy lemonade or “melted snow” and other non-alcoholic beverages, which will delight guests of all ages. Adults 21 years and older can enjoy alcoholic beverages such as a piña colada, margarita or “Summertime Punch,” a refreshing blend of prickly pear syrup, vodka, lemonade and ginger ale.

Desserts and snacks will be served on three buffet stations, check out the menus below!

The cost for the party is $79 per adult and $47 per child. That is a substantial increase from the current Illuminations Sparkling prices of $49 per adult and $29 per child. However, the $79/$47 price tag is what is being currently charged for the Fireworks Dessert Party at Tommorowland Terrace in Magic Kingdom. Considering you’re getting after hours access to a very popular ride, some might thing it’s well worth it. RELATED ARTICLE: Facts and Secrets About Illuminations: Reflections of Earth at Disney’s Epcot


4 – There are variations to the show for holidays.