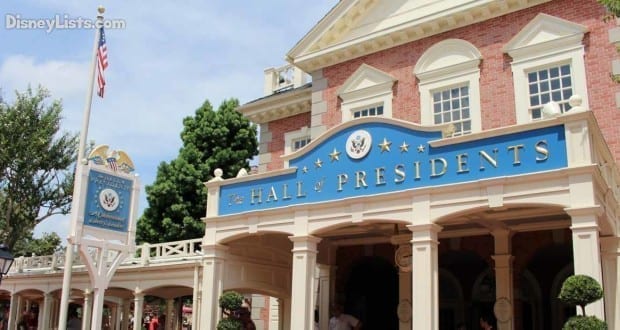 WARNING: Keep comments civil, dignified and respectful. This is a website for Disney news and planning, not for political debate. All comments not following these rules will be deleted immediately.

Controversy has swirled around President Trump’s role in the attraction since the election with some guests unhappy with the election results going so far as to start a petition for Disney to discontinue their practice of having the sitting President address the audience. This practice began with the Presidency of Bill Clinton and will continue with the 45th President.

Disney announced prior to the 2016 election that the Hall of Presidents would undergo and extensive refurbishment that would include not only the installation of a new president but an overhaul of the show’s content. While originally scheduled to open in mid-2017, the reopening has been pushed back until late 2017. Disney cited technical difficulties for the delay. Disney previously also reported difficulties coordinating recording schedules with the White House.

RELATED ARTICLE: 8 Facts and Secrets About The Hall of Presidents at Disney’s Magic Kingdom

At the Magic Kingdom in Walt Disney World, The Hall of Presidents sometimes get passed by for rides and other more thrilling attractions.  I feel like it is a mistake not to stop, to look around the lobby and to enjoy the show.  The history in this attraction makes up the United States and all that we have come to stand for.  Here 8 amazing facts and secrets about The Hall of Presidents:

Every time a new president is elected, the ride would become outdated if it wasn’t updated.  After the inauguration, the attraction typically goes down for a couple months so that the ride can be refurbished and updated with the newly elected president.  The speech must be recorded, the roll call has to be done to add the newest president, the new president must be sculpted and the animatronic created, and the presidents are shifted around to make room for the new president to take their place.   It is a lot of work, but important to keep the attraction accurate, and is done as quickly as possible.

7 – This is the only place besides the White House where the Presidential Seal is displayed.

It actually took an act of Congress to get the Presidential Seal displayed at The Hall of Presidents.  Congress had to take a vote and agree that it could be displayed.  It is in the carpet right when you walk in with a gate around it to prevent guests from walking on it or any damage coming to it.  I witnessed a guest jump the gate to take a selfie while standing on it, and couldn’t believe how some guests just don’t appreciate the importance behind some things. When Disney cast works to record the presidential speech and prepare to add a new president, they also obtain clothes and any other items the President wants their likeness to wear during the attraction.  They will provide a suit and other articles of clothing from their own closets, making their resemblance even more authentic.  Bill Clinton even provided one of his own wrist watches to be worn in the attraction.  This level of detail is amazing.  Obviously for most of the historic presidents, their outfits had to be created based on photographs and styles from the specific time period.

When you think back to opening day in 1971 for Disney World, the Hall of Presidents was part of that experience and one of the attractions that guests were able to enjoy on that first day.  That means the attraction has been running for 45 years, with changes every 4 to 8 years depending on new presidential elections.  The attraction is still amazing and fosters a strong sense of American pride every time you experience it.

Abraham Lincoln was Walt Disney’s favorite president.  Abe was the first president animatronic that was created.  He was created to recite the Gettysburg Address at the New York 1964 World’s Fair.  The recording of the Gettysburg Address was personally directed by Walt Disney, himself.  After the World’s Fair he found a home at Disneyland reciting to guests at the “Great Moments with Mr. Lincoln” attraction.  Once plans for Walt Disney World were put in motion, it made more sense to relocate him and create the full attraction that Walt dreamed of.  He has since been upgraded to new versions of animatronics technology to make his movements more fluid and less rigid.

Be sure to take a walk around the lobby while you wait for the next show to start.  You will find that there are tons of real artifacts that are preserved there.  You will find dresses from first ladies, boots, beer mugs, golf clubs, a microscope and so much more that were actual belongings to our presidents throughout history.  It is amazing to be that close to such impressive artifacts. As soon as you approach the building, you will notice that the building looks like something you would expect to see from the Colonial era.  The building was actually designed specifically to be a replica to Independence Hall in Philadelphia.  If you notice the sign on the outside of the building, the year is 1787.  This happens to be the year of the signing of the U.S. Constitution!  We feel the building was perfectly executed to bring a piece of history to life.