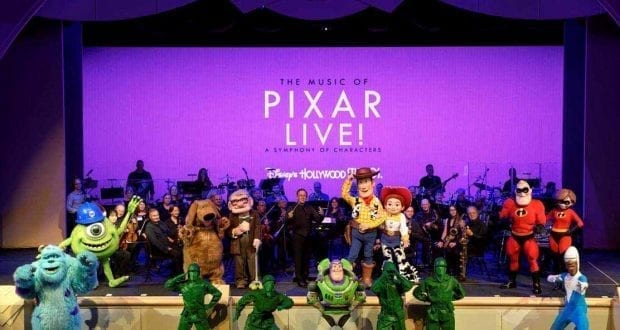 6 Things To Know About The Music of Pixar LIVE! At Disney’s Hollywood Studios

Do you find yourself enjoying the music in certain films just as much as the films themselves? Well, as of May 26, guests to Hollywood Studios can experience The Music of Pixar LIVE – a limited-time concert included in park admission that is well worth adding to your schedule! Here are a few things we think are helpful to know before you go.

1 – What Exactly Is The Music of Pixar LIVE?

Currently presented three times a night at the Theater of the Stars (same theater for Beauty and the Beast – Live On Stage) at a Hollywood Studios, The Music of Pixar LIVE features a very talented live orchestra that performs a melody of music from six Disney Pixar films. While they are performing this 45-minute show, three screens are available for great viewing of clips from each film. On top of the performance, you will see a few favorite Disney Pixar characters make an appearance on stage! The orchestra played so beautifully that there were times we would look at the screen of film clips and forget we were hearing the music live and not from a recorded soundtrack.

We arrived roughly 45 minutes early for the first show which was at 5:00pm and were pleasantly surprised at the entertainment offered in the “preshow” leading up to the performance. Disney obviously expected folks to arrive early because they prepared with interactive questions on the screens. One screen for example asked, “Where would you rather live?”. You could then text your selection from the choices A. Nemo’s coral reef; B. Monstropolis; C. Radiator Springs; or D. Charles Muntz’s Dirigible. It was fun to watch the percentages for each category go up or down depending on how many were sending in their votes. A couple of Army Men from Toy Story were also out and about making their rounds through the theater, posing for photos, and playing with the crowd. A final Army Man came out about 10 minutes before the show and started barking orders. He even had a member of the audience doing jumping jacks at one point! To our surprise, a special concession stand was available in the back of the theater. More surprising however was their unique concession selections to The Music of Pixar LIVE show. Among the cotton candy and tasty treats, they had show specific alcoholic and non-alcoholic beverages called The Big Blue, Explorer’s Punch, and Revved UP Juice. They also had some of the basics like Coca-Cola beverages, Bud Light, and Dasani bottled water. Plus, there was a Cast Member walking around the theater, acting as a walking vendor like at a baseball game with water, Coke, and Bud Light.

The show begins with appearances from our favorite Toy Story characters – Buzz, Woody, and Jesse on stage as the orchestra settles in. Woody even tries to take the podium to conduct the orchestra but of course that doesn’t go over well! The show is broken into six segments with film clips being presented on screen and an excellent melody of memorable music from each Disney Pixar film. The music from each segment focuses on taking the audience through the highs and lows of each film. The character interactions throughout some of the segments are rather short both at the introduction of the segment and again at the end, but it still got the crowd excited. The order of the performance and characters that appeared is as follows:

We enjoyed the Composer notes shared in between the segments on screen which helped the audience better understand what the composer was thinking when compiling some of our favorite Disney Pixar music. The performance ends with a “You’ve Got A Friend In Me” sing-along where the words appear on the screen for everyone to join in! All characters come out on stage for one final appearance which makes for a great final moment to snap a photo.

Plan to arrive early, as the theater has been filling up for each of the three nightly performances. Typical performance times are at 5:00pm, 6:45pm, and 8:15pm but do change depending on the day you plan to visit so please check a Times Guide. If you aren’t able to arrive a good 40-45 minutes in advance, you might want to look into selecting a FastPass or purchasing a Dining Package so you will have a reserved seat. If you have young children, this show may not be one they would sit through for 45-minutes. Our 2-year-old was restless after roughly 15 minutes. Some children were enthralled with the animation on the screens, but our little guy isn’t a big TV watcher and wasn’t impressed. Daddy had to take him for a walk! Our 9-year-old on the other hand thought it was absolutely amazing. To our surprise, after the first segment, many people walked out. It was sad actually and slightly embarrassing! It was obvious that they didn’t know what they were coming to watch and didn’t want to use their time listening to what we felt was an amazing orchestra. We also want to note that Disney has said this is a limited-time concert. While they haven’t announced the end date, we are able to see on the Times Guide on our My Disney Experience account that the last show times available are for Sunday, August 27. Overall, we believe The Music of Pixar LIVE is worth adding to your Hollywood Studios plans, especially if you don’t have toddlers and infants in tow. Truly an exceptional concert that made us feel the emotions presented on the screen through the live music!