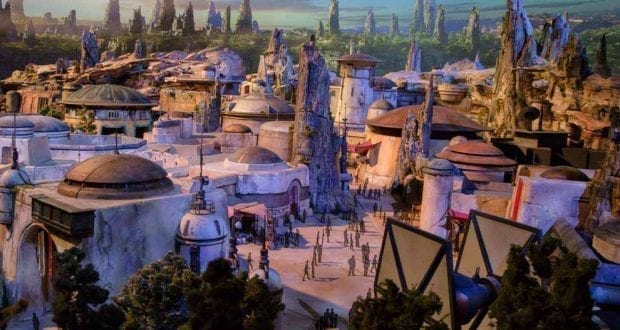 During a special preview of D23 Expo 2017, Walt Disney Parks and Resorts Chairman Bob Chapek unveiled a first look at the epic, richly detailed model of the Star Wars-themed lands under development at Disneyland park in Anaheim, Calif. and Disney’s Hollywood Studios in Orlando, Fla. This stunning exhibition, on display in Walt Disney Parks and Resorts’ “A Galaxy of Stories” pavilion at D23 Expo, is yet another example of the breathtaking new worlds, immersive storytelling and transformational guest experiences that set Disney apart.

“To say we are excited for the Star Wars-themed lands to open in 2019 is an understatement,” Chapek said. “All along, we have said this will be game-changing, and through the model we can begin to see how truly epic these immersive new worlds will be.”

Chapek plans to share exciting new details about the project during the Walt Disney Parks and Resorts Hall D23 Presentation on Saturday. The model will remain on display at the pavilion throughout the weekend to give visitors an up-close look at what’s to come on this never-before seen planet. In addition, the pavilion will display models, artwork and media that provide a first-ever look at some of the locations, starships, creatures, and droids that guests will encounter when they visit this new planet.

At D23 Expo 2015, The Walt Disney Company Chairman and CEO Bob Iger announced the Star Warsproject to the delight of thousands of fans in attendance. The jaw-dropping new lands will open with two anchor attractions – one that gives guests the chance to pilot the Millennium Falcon on a customized secret mission, and one that puts guests right in the middle of a battle between the First Order and the Resistance. Representing the largest single-themed land expansion at 14 acres each, the Star Wars-themed lands will open in 2019.

However, guests don’t need to wait until 2019 to be immersed in the Star Wars galaxy. From special character encounters to fan-favorite attractions like Star Tours – The Adventures Continue, and interactive entertainment like Jedi Training: Trials of the Temple, guests of all ages can experience Star Wars stories at Disney parks and resorts around the world.

Check out the slideshow below. Photo Credit: Disney

The building excitement around the return of Star Wars to theaters has been palpable. Star Wars mania is back and bigger than ever. Fans of the original series have grown up and can’t wait to share their love and excitement of the saga with their kids and grandkids. George Lucas and Disney World have enjoyed a long relationship that has brought the magic of the Indiana Jones and Star Wars movies into the parks. In August of 2015, Disney announced news that fans were waiting for: Star Wars Land would be coming to Hollywood Studios! While construction began in 2016, fans don’t need to wait until 2019 to experience a Star Wars themed day. Whether you are a young padawan or master Jedi, here are nine ways to have a Star Wars Day at Disney’s Hollywood Studios.