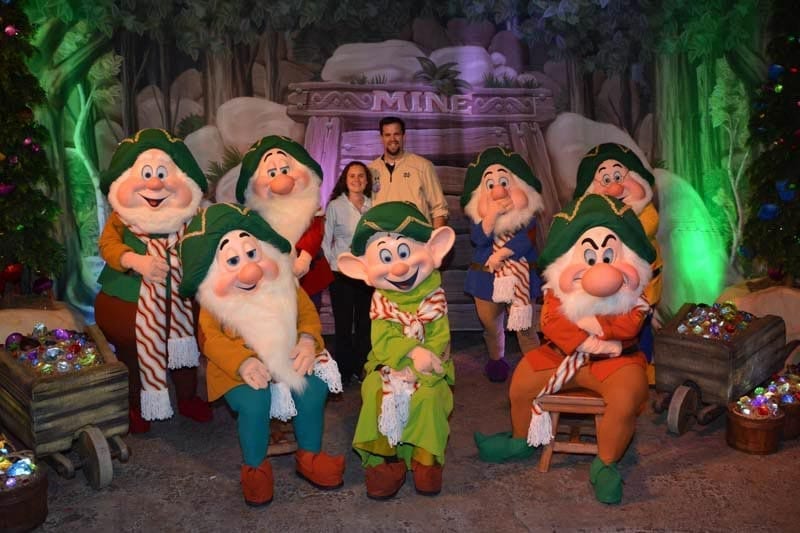 8 - Creepy (and Cute!) Characters: If seeing the characters is a priority, we recommend getting in line right away (if not before the party officially starts)! MNSSHP holds some unique character meet and greets that guests can’t experience during normal park hours. Even the characters you may see in the park during normal park hours, sometimes have their special Halloween attire on! The most popular characters at this year’s party were the Seven Dwarfs as all seven are together in Fantastyland. Moana in Adventureland had a long line which was expected with the film being so popular right now. Jack Skellington and Sally in Liberty Square had a HUGE line before the party even started – an easy 30-minute wait by 7pm. They are in the location Princess Tiana has her meet and greet during the day which gets a creepy facelift for the party with smoke and neat music. Other rare characters include Cruella DeVil, Queen of Hearts, Lotso Bear, Anastasia and Drizella, Tarzan and Jane, Abu, Genie, and Jafar, and Jack Sparrow. In our opinion, there just isn’t enough time in the night to see ALL the characters. We’d recommend selecting your top 3 meet and greets and doing your best to see those. Plus, you may get lucky as we’ve had experiences late into the night such as when Cruella DeVil had no line. We walked right up to her. Thankfully, none of us were dressed as Dalmatians!

Be sure to stop by the Monstrous Scream-O-Ween Ball located in Tomorrowland on the Rockettower Plaza Stage (located between Space Mountain and Carousel of Progress). An awesome DJ keeps the party rolling from the start of MNSSHP at 7:00pm to the end at midnight. This is a great way to see two not-so-scary monsters, Mike Wazowski and Sulley from the beloved Monsters, Inc. film. Not only do you get to see them, you get to dance with them! While we didn’t personally spend much time at the Scream-O-Ween Ball, we still were sure to shake our hips for a short time. Our toddler especially loved this dance party!  Photo Credit: Disney.