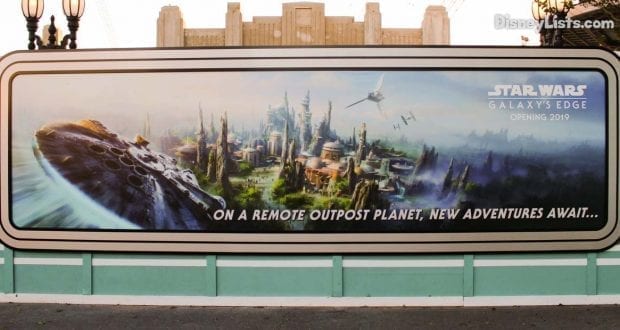 Since the announcement in August 2015 that a Star Wars themed land would be opening at both Disneyland and Walt Disney World, Star Wars fans have been (not-so) patiently waiting for the land to become a reality. Last year, the official name of the land was announced, Star Wars: Galaxy’s Edge. While we have at least one  more year of waiting, there are some details of the land that have been revealed. Below you’ll get all the details Disney has released or confirmed on Star Wars: Galaxy’s Edge so far.

Here are all the details from Disney Cast Member Jennifer-Fickley Baker:

At Star Wars: Galaxy’s Edge, guests visit Batuu, a remote outpost on the galaxy’s edge was once a busy crossroads along the old sub-lightspeed trade routes, but its prominence was bypassed by the rise of hyperspace travel. Now home to those who prefer to stay out of the mainstream, it has become a thriving port for smugglers, rogue traders and adventurers traveling between the frontier and uncharted space. It’s also a convenient safe haven for those intent on avoiding the expanding reach of the First Order.

3 – You’ll Be Able To Fly The Millenium Falcon

One of the land’s two signature attractions will put you in the cockpit of the Millenium Falcon, piloting the ship, shooting blasters or preparing for hyperspace – all while completing a critical mission. But how you perform on the mission holds even bigger stakes: perform with skill and you may earn extra galactic credits, while bringing the ship back banged up could put you on the list of a bounty hunter. End up on Harkos’s list and you may face a problem if you show up at the local cantina. 4 – A Second Attraction Planned for Star Wars: Galaxy’s Edge Puts You On A Star Destroyer

This attraction, “built on a scale we’ve never done before,” will make guests feel like they’re inside a hangar bay in the middle of a battle between the First Order and the Resistance. (The name of this attraction is still yet to be released).

5 – A Cantina Will Serve Up Blue Milk

Only one F&B item has been announced for Star Wars: Galaxy’s Edge so far and that’s the blue milk Luke Skywalker made famous in “Star Wars IV: A New Hope.”

6 – Expect To See Characters From A Galaxy Far, Far Away

Guests will also encounter many familiar faces inside Star Wars: Galaxy’s Edge, including BB-8, Chewbacca, members of the First Order and – among many others – Rex, the troublesome pilot you may remember from the previous version of a certain Disney attraction who takes on a new role in this land as the DJ at the cantina.

Imagineers looked to the exotic markets of Istanbul and Marrakech for inspiration for the land’s marketplace, where guests can explore a rich collection of shops and merchant stalls. One stall will be overseen by a Toydarian, a creatures fans first encountered on Tatooine in “Star Wars: The Phantom Menace.” Here, guests will be able to discover all kinds of fun toys straight out of the Star Wars galaxy.

The first Star Wars: Galaxy’s Edge merchandise, available at select locations at the Disneyland and the Walt Disney World Resort, was released in December. The line currently consists of an assortment of men’s and women’s T-shirts, hats and more that feature faces and places familiar to Star Wars fans, including the Star Wars: Galaxy’s Edge logo, the Millennium Falcon, BB-8, DJ Rex and more. 9 – You Can View A Portion Of The Star Wars: Galaxy’s Edge Model Right Now

A portion of the Star Wars: Galaxy’s Edge model is currently on display at the end of the Walt Disney Presents exhibit at Disney’s Hollywood Studios.

The building excitement around the return of the Star Wars saga to theaters has been palpable. Star Wars mania is back and bigger than ever. Fans of the original series have grown up and can’t wait to share their love and excitement of the saga with their kids and grandkids. George Lucas and Disney World have enjoyed a long relationship that has brought the magic of the Indiana Jones and Star Wars movies into the parks. In August of 2015, Disney announced news that fans were waiting for: Star Wars Land would be coming to Hollywood Studios! While construction began in 2016, fans don’t need to wait until 2019 to experience a Star Wars themed day. Whether you are a young padawan or master Jedi, here are nine ways to have a Star Wars Day at Disney’s Hollywood Studios.


1 – Jedi Training: Trails of the Temple, Next to Star Tours, Echo Lake

Stroll on down towards Star Tours where you’ll experience an out of this world attraction. On December 15, 1989 the original Star Tours blasted off to Endor to the pleasure of Star Wars fans. In 2011, the power of the Force and Disney magic came together again to create the new Star Tours-The Adventure Continues. This newer edition features 3D technology, unique branching storylines and includes the expanded universe including the original trilogy of films and the prequels. Recently, new scenes from Star Wars: The Last Jedi were also added to the story.

Star Wars Launch Bay is an exciting attraction that will please Star Wars fans of all ages. First, you’ll be treated to a short film that celebrates the Star Wars saga. This film includes commentary from key Star Wars producers, directors, writers, crew and story tellers responsible for bringing the Star Wars galaxy to life. You’ll then be treated to an exhibit area that features props, models, costumes and artifacts from Star Wars films. Before you leave make sure you get your cameras ready as this is one of our top recommended locations for photo opportunities! There is so much to see and do in this great new experience-read what you need to know here!