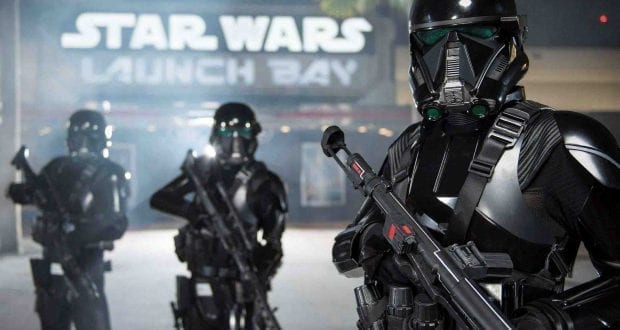 At the D23 Expo in Japan earlier this month it was announced a brand-new Star Wars inspired resort was coming to Walt Disney World. The new hotel will combine luxury with complete immersion into an authentic Star Wars story. Disney has released new visuals of the resort along with a photo of an X-wing Starfighter in development for Star Wars Galaxy’s Edge. Check out all the details below.

Here are some details on the resort from Disney Cast Member Jennifer Fickly-Baker:

The immerse experience offered at this hotel will stand out among all of our resorts around the globe. As you can see, families visiting this resort will board a starship alive with characters and stories that unfold all around them during their voyage through the galaxy – and every window has a view of space!

The resort will also be seamlessly connected to the highly anticipated Star Wars: Galaxy’s Edge land at Disney’s Hollywood Studios, allowing guests a complete Star Wars experience. Guests visiting the resort will be welcome to participate as a resident of the galaxy by dressing in Star Wars-inspired attire.

Also released today was an image of an X-wing Starfighter that is under development for Star Wars: Galaxy’s Edge 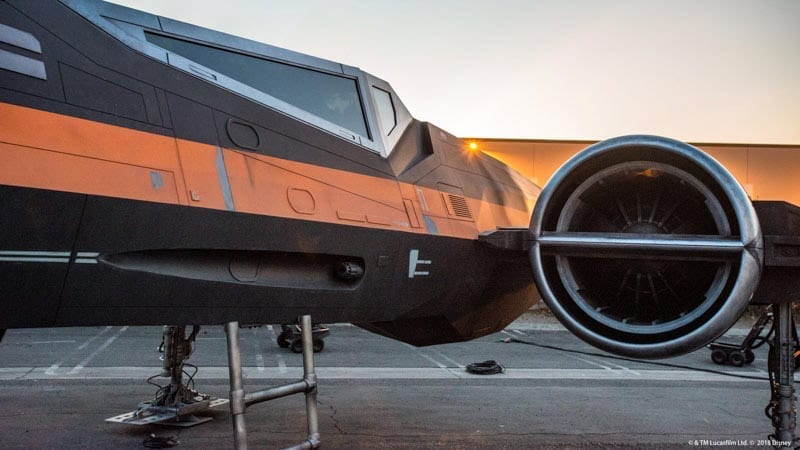 Star Wars Galaxy’s Edge will open at Disney World in 2019.

The building excitement around the return of the Star Wars saga to theaters has been palpable. Star Wars mania is back and bigger than ever. Fans of the original series have grown up and can’t wait to share their love and excitement of the saga with their kids and grandkids. George Lucas and Disney World have enjoyed a long relationship that has brought the magic of the Indiana Jones and Star Wars movies into the parks. In August of 2015, Disney announced news that fans were waiting for: Star Wars Land would be coming to Hollywood Studios! While construction began in 2016, fans don’t need to wait until 2019 to experience a Star Wars themed day. Whether you are a young padawan or master Jedi, here are nine ways to have a Star Wars Day at Disney’s Hollywood Studios.

First up on the list is signing up your young padawan for Jedi Training. After a brief refurbishment, the very popular Jedi Training Academy is back with double the villains–so double the kids! Young Padawans will receive training on how to use the Force and wield light sabers. After a brief but thorough training in the Force, the young knights get a chance to use their skills and will face either Darth Vader or Kylo Ren (who recently replaced the Seventh Sister in the video below). There is also an appearance by Darth Maul. With an all new stage and cast this will be sure to delight Star Wars fans from the age of 4-12. This is a very popular twenty-minute show. Sign ups occur on a first come first come basis. If you have a young Padawan, be sure to sign them up early at the Indiana Jones show location. Check your Times Guide for more information. You will be given a return time for your youngling to return for training!

Stroll on down towards Star Tours where you’ll experience an out of this world attraction. On December 15, 1989 the original Star Tours blasted off to Endor to the pleasure of Star Wars fans. In 2011, the power of the Force and Disney magic came together again to create the new Star Tours-The Adventure Continues. This newer edition features 3D technology, unique branching storylines and includes the expanded universe including the original trilogy of films and the prequels. Recently, new scenes from Star Wars: The Last Jedi were also added to the story.

Star Wars Launch Bay is an exciting attraction that will please Star Wars fans of all ages. First, you’ll be treated to a short film that celebrates the Star Wars saga. This film includes commentary from key Star Wars producers, directors, writers, crew and story tellers responsible for bringing the Star Wars galaxy to life. You’ll then be treated to an exhibit area that features props, models, costumes and artifacts from Star Wars films. Before you leave make sure you get your cameras ready as this is one of our top recommended locations for photo opportunities! There is so much to see and do in this great new experience-read what you need to know here!