We love backstage experiences. Backstage tours allow guests to experience Disney World in a whole new way, and often include some incredible once in a lifetime opportunities, like meeting the second largest land animal in the world! Disney has announced the addition of a new backstage experience available soon at Disney’s Animal Kingdom that guests are going to go wild over. Catch all the details below.

When I think of all the magnificent animals I’ve had the chance to encounter in my career, I’m always awestruck by the rhinoceros. As the second largest-land animal on Earth, they are a massive sight to behold – from their horns to their hoofs and thick armored skin – all of it. I feel fortunate to have the chance to be close to these majestic animals but soon you’ll have a chance too. Today, I’m thrilled to announce guests will have a chance to make a real connection with white rhinos at Disney’s Animal Kingdom through an exciting new backstage animal experience called “Up Close with Rhinos.”

Starting November 1, this 60-minute guided adventure will give guests a behind-the-scenes look at how our dedicated animal team cares for the white rhinos on Kilimanjaro Safaris and how Disney is helping save endangered rhinos in the wild. As part of this intimate experience, guests may even get a chance to touch a rhino. It is an appreciation like no other, and we hope it will inspire our guests to aid in their conservation. 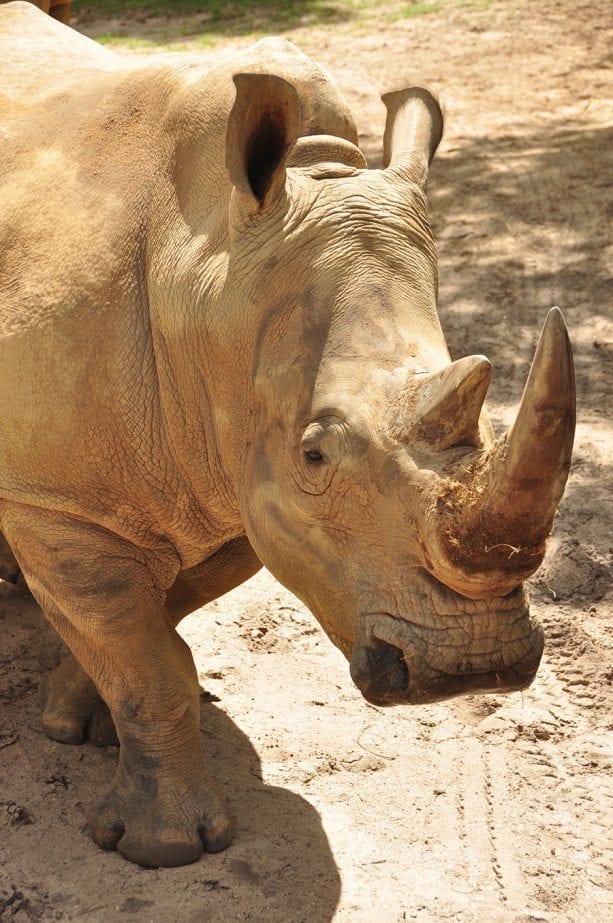 Our keepers are as excited about “Up Close with Rhinos” as I am. Caitlin Miller on our rhino care team told me, “I love talking to guests about how unique each individual rhino’s personality is. I know once guests come and meet the rhinos, they are going to see just how amazing they are and will want to help us secure a future for them.”

One tour of “Up Close with Rhinos” will be offered each day. The booking window for the one-hour experience opens Sept. 22, which is World Rhino Day. Guests must be at least 4 years old to participate, and the cost is $40 (plus tax). Discounts are available to select passholders and Disney Vacation Club Members. To make a reservation, call 407-WDW-PLAY.

Kilimanjaro Safaris is an attraction at Disney’s Animal Kingdom theme park where guests will board a safari truck which takes them into the Harambe Wildlife Reserve to view free roaming animals. Every safari is different and guests may see hippos, giraffes, baboons, elephants, lions and more during this approximately 27-minute ride. Have your camera at the ready and hang on because it can get a little bumpy! Here are 8 fun facts about the Kilimanjaro Safaris Attraction.

When Walt Disney was designing the original concept for the Jungle Cruise at Disneyland, he wanted to use real animals. This idea was quickly scrapped in favor of audio-animatronics versions of the animals due to the many factors involving the use of live animals. Decades later when Imagineers began the concepts for Disney’s Animal Kingdom theme park they knew they would finally have an opportunity to bring Walt’s vision and love of animals to life with Kilimanjaro Safaris. The safari vehicles are GMC trucks that have been converted to run on propane.  These trucks are actual free moving vehicles and they do not run on a track, the driver is responsible for your safety as well as the safety of the animals while out on safari. This is why from time to time your ride vehicle may stop unexpectedly. If an animal is on the ride path the driver must wait for the animal to clear the area before proceeding. This causes all trucks behind this vehicle to stop as they must remain at a safe distance from each other.  At the end of the day, the trucks are driven off the ride and parked in a lot where they can be serviced before the next day. While you are on Kilimanjaro Safaris the landscape looks incredibly real. You may forget for a moment that you are actually in central Florida. The flat-top Acacia trees that are common on the African Savannah are actually just Southern Live Oak trees that they trim to look like Acacias. The animals do not seem to mind though.  And the Baobab trees, which have massive trunks and look as if they are upside down as their branches are leafless and resemble roots are not real trees. The ones on the attraction are made of concrete, however, you can see a real one near the Tusker House restaurant in Harambe Village before you enter the ride. While the animals you see on Kilimanjaro Safaris appear to be free roaming, they are contained to their specific ecosystem by camouflaged walls, water barriers, and cattle guard chains on the ground. The lions are kept in their location by an 18-foot deep and 21-foot wide moat that separates them from the ride vehicles. Disney has done an incredible job of hiding many of these features so it appears the animal habitats are connected. Animal keepers place food and toys in areas where the animals will be seen from the ride path, this way guests have the best chance of viewing the animals while on safari.

The animals do not stay on the attraction overnight. Each night they return to their barn located behind the scenes to rest and receive veterinary care.  The Animal Keeper team has trained each animal to return to the barn when it hears a certain sound, some returning to a tambourine, a triangle or a bell, among many other sounds.  The animals also do not go out on the safari every day as they rotate to allow each animal proper time for rest, care, and enrichment.