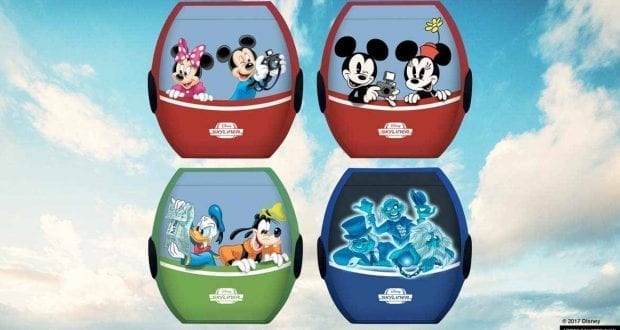 While construction at Disney World seems to be forever ongoing, there is an end in sight for two projects on Disney World property. Disney has announced the opening dates for its Disney Skyliner and Gran Destino Tower at Disney’s Coronado Springs Resort along with some additional details. Catch all the details below:

Here are all the details on the Disney Skyliner from Disney Cast Member Thomas Smith:

Bob Chapek, Chairman of Disney Parks, Experiences and Consumer Products, has announced that Disney Skyliner will be ready to begin transporting guests at the Walt Disney World Resort beginning fall of 2019!

And next fall, Disney Skyliner will not only efficiently move you to your location, but it’ll also offer a whole new way to experience Walt Disney World with amazing views only available from the sky – with great photo opportunities! For example, guests arriving at the International Gateway station will travel through the trees and be welcomed into Epcot with remarkable, never-before-seen views across World Showcase.

The innovative transportation system is quickly coming to life! Workers just installed the last support tower at the Resort and are beginning to thread the series of reinforced cables to carry guests in stylish themed gondolas. 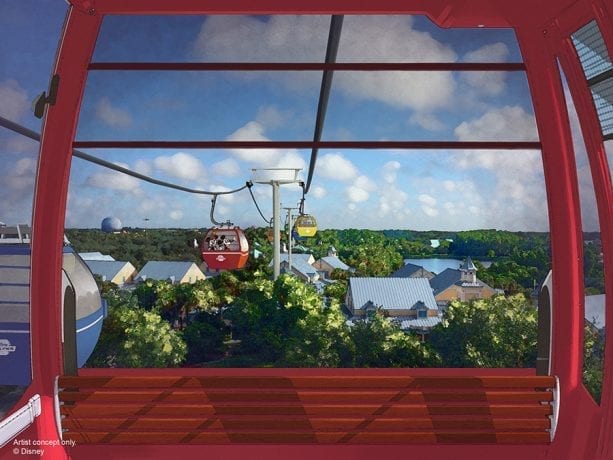 Here are all the details on the Gran Destino Tower from Disney Cast Member Jennifer Fickley-Baker:

Earlier this fall, we shared renderings of the exciting expansion that’s currently underway at Disney’s Coronado Springs Resort. Disney Parks, Experiences and Consumer Products Chairman Bob Chapek has unveiled more about the reimagining, including the name of the new 15-story centerpiece of the resort, the Gran Destino Tower.

The tower, which will be completed in July 2019, will serve as the new main entrance point for guests visiting the resort and will add a total of 545 new guest rooms (including 50 suites) to the resort, as well as feature a gorgeous two-story lobby. A themed table-service restaurant is also planned for the top of Gran Destino Tower, which will serve up delicious food and incredible views of the Walt Disney World Resort.

An oasis set on the shore of Lago Dorado, the reimagined Disney’s Coronado Springs Resort celebrates the daring spirit of the great Spanish explorers, artists, writers, and architects. Throughout the resort, guests will discover a blend of classic Spanish influences, imaginative Disney touches and modern comforts both inside and out. The resort’s more than 1,800 existing rooms have also been fully updated with new fixtures, furnishings, and lighting. A second new restaurant is planned to open on an island in the middle of the resort’s 14-acre lake, Lago Dorado, with new walkways stretching across the water, making it convenient no matter where guests stay at the resort. And a fresh color palette will tie the entire resort experience together, blending the new and the newly reimagined.

Guests will soon be able to make reservations for Gran Destino Tower for stays beginning in July 2019.

RELATED ARTICLE: The Disney Skyliner – What We Know So Far

Just when we think Disney has thought of it all – they go and surprise us with some new, ingenious plan! Disney is well aware that as the crowds increase with new attractions, lands, and resorts on the horizon, they must prepare for the getting guests to and from the parks. So, here we introduce another form of Disney transportation – the Disney Skyliner! While we wait for the Disney Skyliner to officially take to the sky, we anticipate transportation that is convenient, all while offering picturesque views of the Walt Disney World Resort. Let’s chat about what we know so far about the Disney Skyliner!

Disney’s transportation has always been a favorite of ours. Not only is it super convenient, but most forms of Disney transportation are free! Currently, Disney offers bus, boat, Monorail, and the newer Minnie Van Service (which does have a fee). Well, now we are thrilled with the great anticipation of the Disney Skyliner – a point-to-point gondola transportation system. The gondola system allows guests to board an enclosed cabin where they will glide through the sky on a steel cable from one station to another. You may remember the days of the “Skyway” at Magic Kingdom? While the Skyway transferred guests across Magic Kingdom until it closed in 1999, the Skyliner is the same idea – just in a much more modern and expansive way!

The rumors about a gondola-style travel system coming to Walt Disney World first began in February 2017 when Disney filed a building permit for “V”- shaped structures that were rumored to look like gondola stations. When the D23 Expo rolled around in July 2017, Disney Parks Chairman, Bob Chapek confirmed the Walt Disney World Resort was, in fact, getting a gondola form of transportation, to be called the Disney Skyliner. No time was wasted after that, as construction began in late 2017. The anticipation and excitement continue to grow as we regularly check out the incredible progress being made!

By checking out the Disney Skyliner layout, we’ve learned there are a total of six stations for the gondola system with five of them being stations to load and unload, and one being a turn station. If starting off at Disney’s Epcot, the mapped out path the gondola system is proposed to take is as follows:

The Skyliner cabins will feature all our favorite Disney characters designed on the outside of the cabin. Characters Disney has mentioned or shown in art renderings include the “Fab Five” characters, Beast and Belle, and Hitchhiking Ghosts. The cabins are expected to seat 8 guests per cabins. While this doesn’t seem like many people, it is still suspected this form of gondola system can transport 3,000+ people in one hour! It has been confirmed that the Skyliner will not have air-conditioning. With the Florida heat, this sounds like it will be painfully uncomfortable but are sure Disney will have proper ventilation that will help the breeze benefit the air in the cabin! We also know the cabins will have an audio system allowing for announcements and safety information, much like the Monorail.

Disney has announced that the Skyliner will open in fall 2019. We suspect it will open prior to the late 2019 opening of the new Hollywood Studios land, Star Wars: Galaxy’s Edge. The Skyliner will also be open before the new Ratatouille ride debuts at Epcot. The latest rumor is Spring 2019!

We’ll be sure to bring you Skyliner news as Disney releases it. In the meantime, we’ll just have to keep daydreaming about the beautiful views we can expect to see from our gliding cabin!