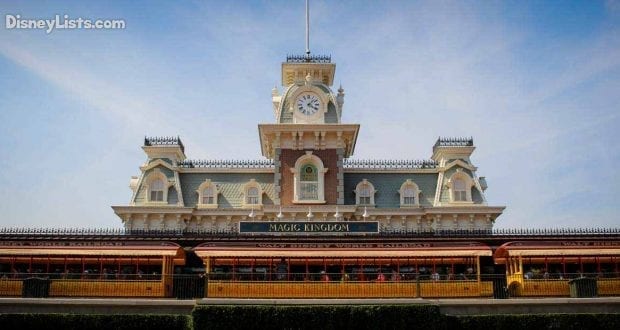 9 Myths about Magic Kingdom Theme Park that are Completely Untrue

Posted by: Jenn S in Magic Kingdom, The Parks

When it comes to creating the magic that makes the Magic Kingdom so awesome, Disney World has lots of tricks up their sleeve. There are lots of behind the scenes secrets that only a handful of people know. There are also a lot of secrets that a lot of people know that actually aren’t true. Over the years these secrets have developed into myths that have amazing staying power. Some of the things people have come to believe about Disney World would make Walt roll over in his cryogenic chamber (bonus myth!). So, if any of the 9 things below are things you “know”, you’ve fallen for a Magic Kingdom myth.

1 – The Castle Can Be Dismantled in Case of a Hurricane

Because Orlando is susceptible to hurricanes, Cinderella Castle was designed so it could be dismantled in the event of a major hurricane, right? This one is false. While the spires on the castle can be removed, it takes several days and a large crane to do so, neither of which is practical when a hurricane is quickly approaching. Instead, the castle was built to withstand winds of over 110 mph with a 600-ton steel frame and 10-inch concrete walls. It’s definitely not going anywhere during a hurricane.

A worker named George was killed in an accident while building this attraction. Cast Members who work at the attraction claim that George will cause the ride to break down and have reported hearing footsteps, receiving phone calls to the control tower and even seeing strange things. Cast Members are sure to tell George “Good Morning” and “Good Night” each day or else the ride will malfunction.  According to Disney, there were no workers killed during construction of the Pirates of the Caribbean attraction and ride malfunctions are a normal part of theme park operations. But Cast Members who work this attraction will tell you of the strange occurrences and ride malfunctions caused by George. 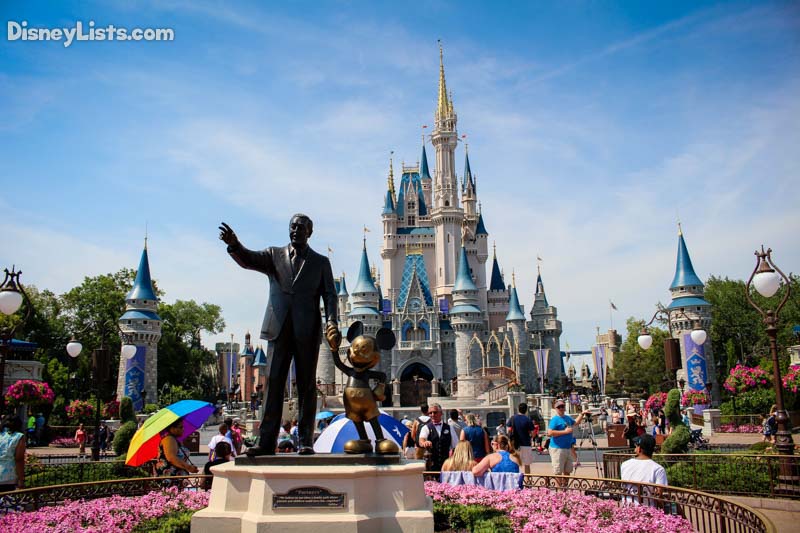 The Partners Statue is a bronze statue featuring Walt Disney holding Mickey Mouse’s hand as Walt points off into the distance.  The statue is located in front of the castle at Magic Kingdom. There are several myths surrounding the meaning of this statue at Walt Disney World.  Some believe that Walt is pointing toward EPCOT and telling Mickey to “Go forward without me.” But the most popular myth connects this statue to another one located at the front of Main Street U.S.A. of Roy Disney sitting on a bench with Minnie Mouse. Many believe that Walt is pointing to Roy and telling Mickey that he must go with Roy now as Walt cannot continue.

None of these myths about the statue are true according to the sculptor of the statue Blaine Gibson.  He has said that the statue is meant to depict Walt’s goal of making guests happy, and he is pointing to all the happy guests as if to say to Mickey “Look at all we have created.” Gibson has stated there is no other meaning to the statue, and the Partners Statue is located at other Disney Parks around the world, whereas the Roy statue is not.

4 – The Rooms at The Contemporary Resort Were Designed to be Removable.

The A-frame design of The Contemporary Resort, near the Magic Kingdom, allowed rooms to be removable, with the option to slide them in and out to refurbish the rooms as required. However, the building settled making the rooms impossible to remove.

It is easy to see how this myth came about because of how the building was constructed. During construction of the resort Disney became pressed for time and the unique style of the structure allowed them to work on both the structure and the rooms at the same time. The rooms were completely assembled at a nearby site and then placed into the frame of the building. The rooms slid into the spaces just like a drawer would in a dresser, however, these rooms were never made to be removed again. It would be difficult to remove the rooms once the exterior of the building was complete, not to mention the difficulty of unhooking water and electricity. It would also be very expensive to refurbish rooms in this manner and would undoubtedly cause guest complaints of inconvenience and noise.  It is significantly easier to just redecorate the rooms while they are in place.

5 – Walt Disney has a singing bust in the Haunted Mansion

Does that singing bust in the graveyard scene look familiar to you? Is it supposed to be a tribute to Walt Disney? Sorry, this one is false. The bust commonly thought to be Walt Disney is actually Thurl Ravenscroft, who voiced Tony the Tiger and sang the original “You’re a Mean One Mr. Grinch”

6 – There are human remains inside the Haunted Mansion

This myth says that guests have been known to spread ashes of loved ones inside the Haunted Mansion attraction. This one is actually true and it happens more frequently than you would think.  Cast Members have stated when this occurs the ride is closed while custodial is called to clean the ashes. Please don’t try this as your loved one will end up inside a garbage bag and then to a landfill. People have also tried to spread loved one’s ashes on Pirates of the Caribbean, Splash Mountain and many other locations across Walt Disney World.

The suite in Cinderella Castle was supposed to be Walt’s personal suite when visiting the park, but it was not completed after his death.  The truth is that the designs for Cinderella Castle were not completed until after Walt’s death. The Walt Disney Company went forward with Walt Disney World to complete Walt’s dream of the Florida project.  While Walt does have an apartment at Disneyland, one was never planned for him at Walt Disney World.  The Castle suite was constructed out of unused space as part of “The Year of a Million Dreams” promotion. 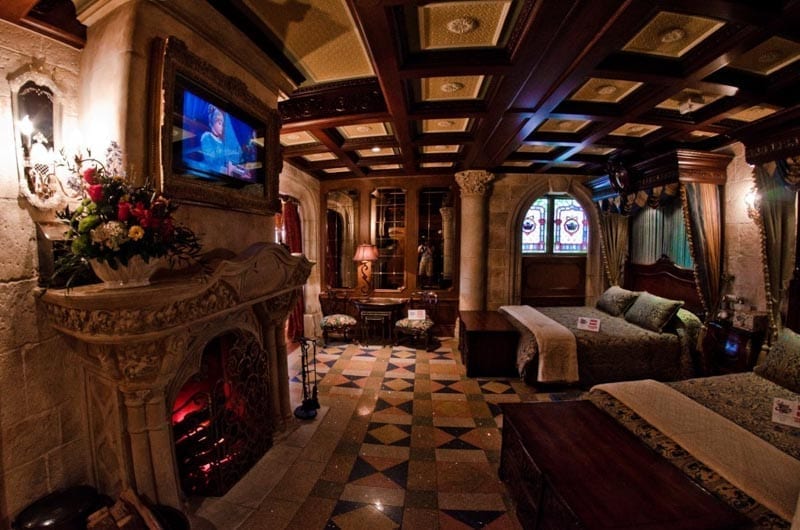 Did The Walt Disney Company choose October 1st to open Magic Kingdom as a joke to Walt being dishonorably discharged for drawing cartoons on an Army truck? The rumors and stories surrounding this myth involve Walt thinking his dishonorable discharge was a joking matter, even hanging the discharge papers upside down in his office.  However, this is completely false. Walt was never enlisted in the Army or any of the other armed forces for that matter because he was too young.

Walt Disney had wanted to enlist in the Army during World War I but he was not old enough. He lied about his age to enlist in the American Ambulance Corps of the Red Cross. A 1919 photo of a young Walt Disney shows cartoons he had drawn on the side of a Red Cross Ambulance, which has been mistaken for an Army truck. After nearly a year of service in Europe Walt returned to the U.S.  On October 10th 1919 he was discharged from the ambulance corps.  The real reason Magic Kingdom opened on October 1st likely has more to do with the fiscal year beginning on that date. Because the Magic Kingdom did a soft opening on September 30th the Walt Disney Company could qualify for the Federal investment tax credit for that fiscal year.

9 – There is an entire underground city beneath the Magic Kingdom

Walt Disney wanted guests to be immersed in the stories, characters, and settings in his theme parks. One of the things that Walt felt ruined the magic at Disneyland was that Cast Members would need to walk across the park in costume. This would mean you would see someone from Frontierland dressed as a cowboy walking in Tomorrowland. This ruined the show Walt was trying to create. For his park in Florida, Walt wanted to create underground tunnels for Cast Members to walk from location to location without being seen by guests. 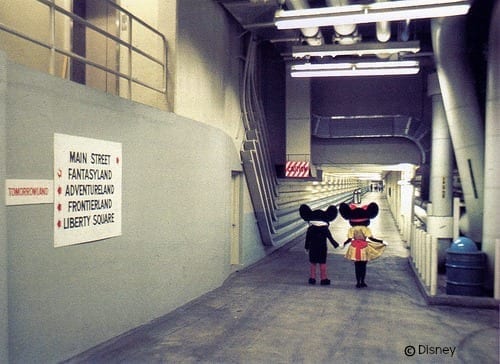 The Utilidors are large, large enough that you could drive a vehicle through them, but it is not exactly an underground city any more than you’re basement is. It is mostly a series of walkways and staircases leading to “on stage” areas of the park, stock rooms for merchandise and food and beverage locations and offices.