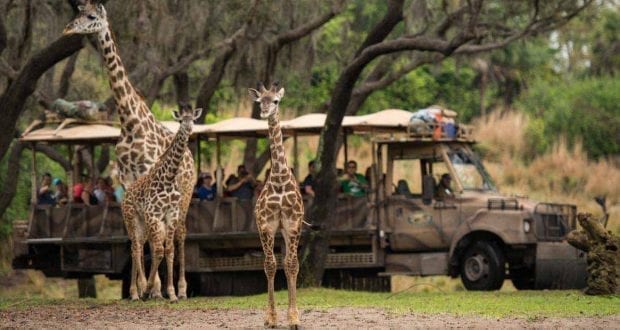 Big news in the world of Disney dining this week as Chad’s favorite restaurant in the world opens a location in Disney Springs and Whispering Canyon gets an all-new menu! Disney announces price increases for tickets but, softens the blow with some ticket and room specials. Plus, baby giraffe makes an appearance on stage and a Disney legend is confirmed as a cast member in new WDW attraction. All this and more in this week’s News Roundup.

Disney park ticket price increases happen once or twice a year and this week, Disney again has raised ticket prices for specific tickets. In 2018, Disney introduced a new date-based ticket system. This means that ticket prices do vary depending on when you visit. Holidays and weekends cost more than a regular weekday. The five months with the lowest ticket prices are January, February, May, August, and September.

With the latest increase, date-based theme park tickets, multi-day theme park tickets, water park annual passes have seen prices changes. The most dramatic increase is the cost of a one-day base ticket during the of the busiest weeks of the year (Christmas Day through New Year’s Eve) which now costs $159. Summer ticket prices have been raised slightly with an increase of $9 per day. In the lowest price range, a single day ticket remains unchanged at $109. Water Park annual passes have been raised as well by $9 from $130 to $139. Annual Passes for the parks were not increased.

José Andrés’ beloved Jaleo brand has opened a new location at Disney Springs, bringing the spirit and flavors of Spain to Disney Springs. Jaleo at Disney Springs, opened March 17 and is the fifth Jaleo location in the U.S., the first in Florida and the largest location to date. This also happens to be Chad’s absolute favorite restaurant anywhere he’s visited in the world! Having a location in Orlando is a dream come true!

First opened in Washington, D.C., in 1993, Jaleo represents the very best of Spanish cuisine and design, seen through the creative lens of Spanish Chef Andrés and his team. Jaleo offers an unparalleled tapas experience in a lively setting befitting its name, which means “revelry.”

On the restaurant’s front corner adjacent to the Jaleo entrance will be Pepe by José Andrés, the first brick and mortar location of the chef’s wildly popular Spanish food truck, which has been a D.C. fixture for more than six years. Pepe by José Andrés will offer a diverse menu of Spanish sandwiches, or bocatas, both hot and cold, as well as gazpacho and salads to go. The quick-service location will also sell delicious Spanish sangria, complete with sangria ice cubes to prevent any dilution of the drink in the Florida climate. 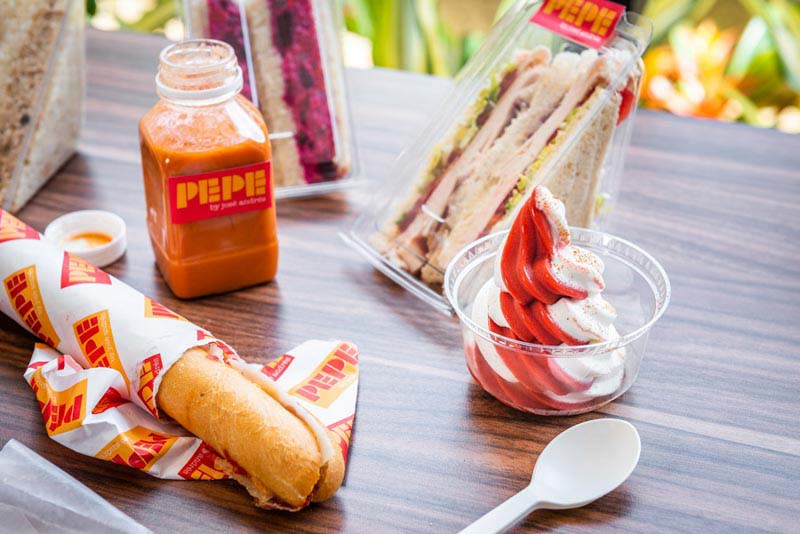 Designed by renowned Spanish designer Juli Capella, the architectural form of the building housing both Jaleo and Pepe is inspired by the bold, playful nature of Spain featuring petals that organically open, inviting guests to enter and experience the very best of Spanish cuisine. The petals themselves form pergolas, which extend toward the outdoors, allowing light to flow in and out.

Jaleo at Disney Springs is now open with lunch service beginning later in the month. Pepe is now open for lunch and dinner.

On January 14, a male Masai giraffe calf was born on the savanna of Kilimanjaro’s Safari. The giraffe has been backstage until this week. Disney Cast Member Scott Terrell has all the details:

Ever since his birth on the savanna at Disney’s Animal Kingdom on Jan. 14, our male Masai giraffe calf has been bold, curious and courageous… and to celebrate his spirit, he has been given a very special name – Jabari, which means “brave one” in Swahili.

Now standing at seven-feet-tall, Jabari has spent the past few months bonding with his mom Mara in a backstage habitat. True to his name, Jabari has quickly reached all his key developmental milestones, so today he is returning to Kilimanjaro Safari savanna to officially join the rest of the giraffe herd.

Our animal care team typically is given the honor of naming baby animals, but this time the naming choice went to our safari drivers because they played such an important role in keeping guests calm during Jabari’s birth. Several of the drivers were on hand this morning to see Jabari in stride, which left them smiling and beaming with pride.

Jabari’s parents, Mara and George, were chosen to breed through the Species Survival Plan (SSP), which is overseen by the Association of Zoos and Aquariums and ensures responsible breeding of threatened and endangered species, thereby ensuring healthy, future generations. Jabari is following in the hoofsteps of his sisters Amira and Aella, two young female giraffe calves who were born at Disney’s Animal Kingdom last year.

The Masai giraffe, found primarily in Kenya and Tanzania, is one of nine types of giraffe and is a vulnerable species. There are believed to be roughly 32,000 Masai giraffes left in the wild, and their population continues to decline due in part to poaching and habitat loss.

Here’s a look at Jabari’s debut.

A new menu has debuted at Whispering Canyon Café, the rowdy western-themed restaurant at Disney’s Wilderness Lodge. Here are all the details from Disney Cast Member Alex Dunlap.

Howdy folks! If yer lookin’ for some good eatin’ and fine fixin’s, then I’ve got some news for you! Whispering Canyon Café at Disney’s Wilderness Lodge has a rootin’ tootin’ new menu starting TODAY with skillets galore! The fun-filled restaurant is known for its sassy cast members, Old Western games, and fine frontier fare, which now includes a whole new array of all-you-care-to-enjoy signature skillets for lunch and dinner available now as well as breakfast skillets (starting March 26). And while you chow down on these signature skillets, our rowdy canyon townsfolk are here to serve you, and their boisterous goings-on aren’t going anywhere anytime soon. Do the hokey pokey, ring the dinner bell, and even ask for ketchup (at your own risk, of course). But that’s enough hootin’ and hollerin’ for right now – let’s get right into these delicious new items!

In addition, each one of these hearty all-you-care-to-enjoy skillets comes with a different assortment of sides that may include coleslaw, sautéed green beans, buttered corn, oven-roasted carrots, charred peppers, BBQ cauliflower, Yukon mashed potatoes, or roasted potatoes. You’ll also get to chow down on freshly-baked cornbread served with delicious honey butter with every dinner skillet. 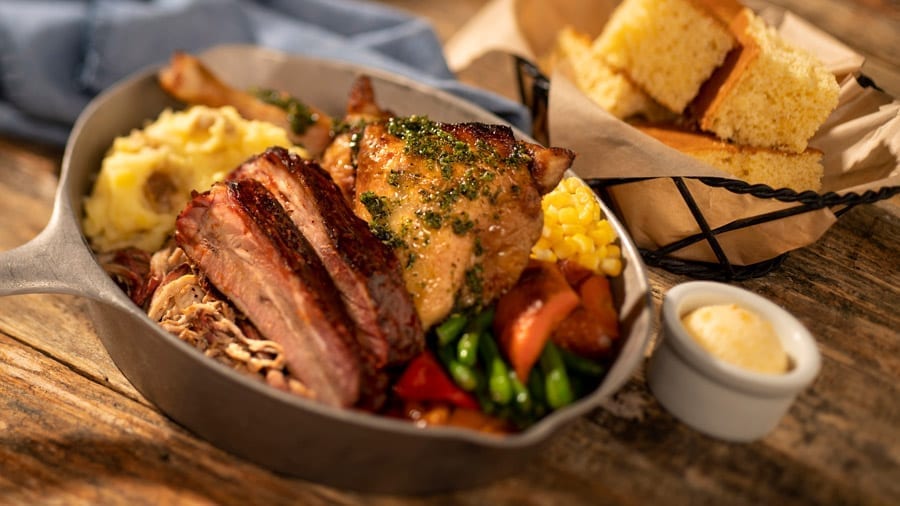 Now, if you’ve got a hankerin’ for something sweet, then you can order the Apple Pie. This mouth-watering slice of pie comes dusted with powdered sugar and is served with a big ol’ scoop of vanilla ice cream.

Thirsty cowpokes will also enjoy a selection of newly-themed cocktails such as the Bourbon Cowboy, which comes garnished with apple slices and pairs great with any lunch and dinner skillet. Selections of wines and draft beers are also available to help you wet yer whistle.

In addition, starting on March 26, you’ll also be able to feast on an array of breakfast skillets. Rise and shine to a delicious chuck wagon breakfast with the Heritage Skillet or the Carnivore Skillet. The Heritage Skillet comes with country potatoes, hickory-smoked bacon, and pork sausage links. For the meat-lovers, the Carnivore Skillet comes loaded with house-smoked ham, hickory-smoked bacon, pork sausage links, and oak-smoked beef brisket. Oh, and did I mention that both of these skillets come with house-made buttermilk-cheddar biscuits, scrambled eggs, and Mickey Waffles? That’s right cowpokes, MICKEY WAFFLES FOR EVERYONE!

For those looking for a lighter start to your morning, the Lighter Side Breakfast Skillet is a great option. It comes with Bircher Muesli (Swiss oatmeal), egg white spinach frittata, turkey bacon, and turkey sausage, country potatoes, fresh fruit, yogurt, and of course, more Mickey waffles!

Are you hungry yet? Because I sure am! So jump right on your hobby horse and trot on over to pay us a visit. The Whispering Canyon Café is located off the lobby of Disney’s Wilderness Lodge, and reservations fill up fast, so be sure to make yours today by calling 407 WDW-DINE (407-939-3463) or by visiting the Walt Disney World Resort website.

Lightning McQueen’s Racing Academy is the result of a close collaboration between the teams at Disney Parks Live Entertainment and Pixar Animation Studios, creating an all-new story set in the world of “Cars.” The show features many of the original voice talents from Disney•Pixar’s “Cars 3” and other films in the franchise.

Take a look inside the recording session with another star of “Cars,” John Ratzenberger, who plays McQueen’s closest companion, Mack. Ratzenberger is considered Pixar’s “lucky charm,” having contributed his talents to every Pixar Animation Studios feature film. He was recently back in the studio to once again give voice to Mack for Lightning McQueen’s Racing Academy.

When you enter the theater, Mack and Sally Carrera welcome all the rookie racers and test your knowledge of Lightning McQueen as you take your seat and get ready for the show. Fuel up and rev your engines, because the fun starts when Lightning McQueen’s Racing Academy opens on March 31 at Disney’s Hollywood Studios!

With spring break approaching, now, more than ever is the time for Florida residents to experience all that’s new and exciting at Walt Disney World Resort. And with sunshine and warmer weather also comes special theme park tickets and great rates on stays at select Disney resort hotels.

For a limited time, Florida residents can purchase a four-day Discover Disney Ticket for less than $49 per day plus tax (valid for admission to one theme park per day). Here are the ticket details for home-staters:

Tickets can be purchased now through June 27, 2019, and must be used by June 30, 2019. Valid proof of Florida residency is required. With these special tickets, residents can visit any three or four days through June 30, 2019, with no blockout dates.

Tickets are nonrefundable and nontransferable and exclude activities and events separately priced. For more information or to purchase the Discover Disney Ticket, Florida residents can visit Disneyworld.com/discoverdisney.

Pairing the Discover Disney Ticket with great Florida resident rates at select Disney resort hotels is a great way to experience a Walt Disney World Resort getaway. Florida residents can book through June 30, 2019, and save up to 35% on rooms at select Disney resort hotels for stays most nights April 28-June 30, 2019.* For a no-obligation quote on this and other specials click here.