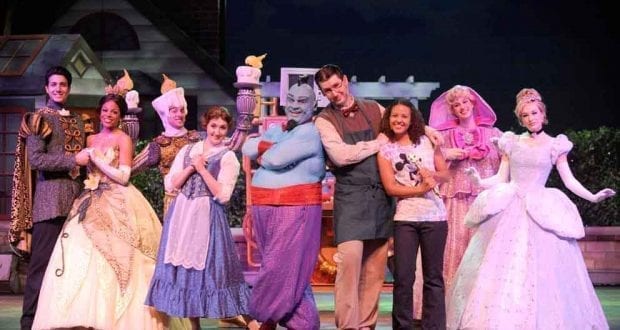 Sometimes you just have the Believe! It’s easy however as you age to forget that believing in something other than work and routine is possible. Join us aboard the Disney Cruise Line with the Disney Dream and Disney Fantasy to experience a Broadway-style live performance of Disney’s Believe.

Disney’s Believe debuted in 2011, and years later it is still a must-see in the Walt Disney Theatre. While it was formerly the most popular show to see aboard both the Disney Dream and Disney Fantasy, it is now a runner-up to two impressive shows including Beauty and the Beast on the Disney Dream and Aladdin – A Musical Spectacular on the Disney Fantasy. Disney’s Believe may be up against popular shows, but it’s still a must-see in our opinion as it offers a memorable message.

Twelve scenes hold an outstanding line up of songs, costumes, scene changes, and a plethora of Disney characters. We meet the main characters, Sophia and Dr. Greenaway, in Scene 1 as a father and daughter duo. Sophia is young, eager to believe in magic and wanting nothing more than to share that with her father. Her father, Dr. Greenaway, is busy with work trying to make his garden flower grow with precision for incoming journalists. He doesn’t have time to stop for magic, nor does he want to until he perfects this project. In his perfectionism and doubtfulness, Sophia leaves saddened and angry at her father’s disbelief in the possibilities of magic – especially because it’s her birthday. 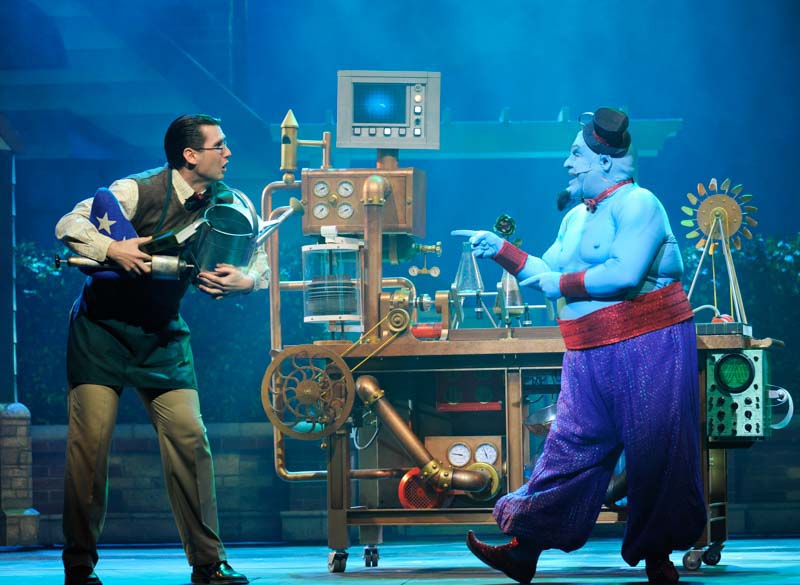 To Dr. Greenaway’s surprise, the Gene from Disney’s Aladdin appears from a watering can! Gene is the star of the show with his silly humor, quick wit, and caring concern. He shines through in Scene 2 when he sings “Never Had a Friend Like Me”. Puppetry, props, and lighting make this scene a bright and fun one. The Gene grants “Dr. G” three wishes. In Dr. Greenaway’s disbelief, he wishes for the Gene to stop talking about magic – wish one is granted. Just after that, the Gene starts to play with Dr. G’s work contraption which makes Greenaway wish that he stops messing with it – wish two granted. Greenaway finally settles in and talks about Sophia’s love for magic. He too wishes he could believe in magic. Wish three begins by bring in numerous Disney characters that hold magic near and dear to show Greenaway what believing in magic is all about!

The Disney characters Gene brings in to different scenes to show Dr. G the path of magic and encourage his belief more and more with each scene includes Merlin, Mary Poppins, Bert, Baloo, Pocahontas, Rafiki, Peter Pan, Princess Tiana and Prince Naveen, Fairy Godmother, Prince Aurora and Prince Philip, Cinderella and Prince Charming, Jasmine, Aladdin, Lumiere, Mrs. Potts, and more. As you can see, Believeis loaded with characters making it a great experience for all Disney fans young and old! Each scene lets another character shine through with some of the most unforgettable songs we all know and love from Disney films.

After the many Disney characters have a chance to show Dr. Greenaway their love for magic, Scene 10 takes place in a ballroom which includes an obvious turning point for Dr. G. He didn’t believe in slowing down and taking time to experience magic with his daughter, Sophia, but this scene changes all that. He sees Sophia grown with her very own Prince and realizes that taking time out for her is necessary. He learns to cherish every moment! You’ll want to bring a tissue as the father-daughter duo dance to the touching song from Dumbo, “Baby Mine”. As the song comes to an end, Dr. G understands this moment was in his imagination. Dr. Greenaway is awakened out of his imagination to realize he still hasn’t missed his daughter’s special birthday! He calls back the Gene to let him know, he believes! The third wish is fulfilled.

The show doesn’t end there because Sophia’s birthday party is just getting started with the help of some favorite characters from Beauty and the Beast. Sophia feels the best birthday wish of all could be to make her father’s flower grow and together they call on a little help from Tinkerbell just in time for the journalist to arrive. Finally, before the curtain falls, many of the characters reappear on the stage, including Sorcerer Mickey and Minnie!

Overall, we enjoyed this performance and would see it again. The message is beautiful and the amount of characters you see and hear from is outstanding. There were a few moments that we could have done without, but they usually had a purpose of showing the childish and fun behaviors of the characters, particularly with Sophia and Gene. You’ll leave wanting to cherish every moment with your kids as you strive to see the magic through their eyes!

Located on Deck 3 Forward on both the Disney Dream and Disney Fantasy, you’ll find the beautiful Walt Disney Theatre where multiple Broadway-style shows take place throughout your cruise itinerary. The theatre has a 1,340-seat capacity which was never completely full during our visits. Floor seating is available on Deck 3, but you’ll also find balcony seating accessible from Deck 4 or from the floor seating stairs on Deck 3.

Refreshments can be purchased at refreshment stands called Preludes. These can be found at both the left and the right entrances on Deck 3. You can also find a refreshment spot located on Deck 4 for balcony seating guests located near the Buena Vista Theatre. These refreshments are an extra fee and include items such as popcorn, canned sodas, bottle water, candy bars, and beer. Tip – if you’re planning on enjoying popcorn more than once, you may want to look at purchasing a popcorn bucket as refills are cheaper than buying a new popcorn each time.