In anticipation of the crazy large crowds that will be coming to enjoy Star Wars: Galaxy’s Edge, Disney has announced new EXTRA, Extra Magic Hours for Disney Resort Guests this fall at multiple parks. Catch all the details below.

The Force is strong at the Walt Disney World Resort with exciting, out-of-this-galaxy update that this fall, guests of Disney Resort hotels and other select hotels will have more opportunities to take advantage of the Extra Magic Hours benefit with Extra, Extra Magic Hours for a limited time at our theme parks!

The Extra, Extra Magic Hours benefit will include Star Wars: Galaxy’s Edge at Disney’s Hollywood Studios, as well as other experiences at Disney’s Animal Kingdom and Magic Kingdom theme parks.  Here’s the rundown:

(Please note that on Aug. 29-31, Disney’s Hollywood Studios will open at 6 a.m. for all guests. There will not be Extra, Extra Magic Hours on those days.)

Extra Magic Hours will also continue to be available on select days at Epcot.

Extra Magic Hours is one of the many benefits and amenities you can enjoy as a guest of a Disney Resort hotel.  Some of the others include early access to Disney FastPass+ planning (not available during Extra Magic Hours benefit), complimentary transportation and standard theme park parking and other entertaining amenities. Visit our special Extra Magic Hours page for details.

May The Fourth Be With You!

Star Wars: Galaxy’s Edge, the highly anticipated new land in Disney’s Hollywood Studios, is just a few months away from opening. This week, as part of the 30thAnniversary Celebrations of Disney’s Hollywood Studios, I had the opportunity to walk through Galaxy’s Edge (not once, but twice!) and got a glimpse of how things are coming along. It was an amazing experience. Catch all the details below.

Since Star Wars was released in 1977, many fans have dreamt of what it would be like to be in the Star Wars universe. In August of 2015, fans were ecstatic to hear that a new Star Wars land would be opening in both Disneyland and Walt Disney World. Almost four years later, we’re on the edge of being able to experience the immersive world of the Force when Star Wars: Galaxy’s Edge opens at Disney World on August 29, 2019. While we know quite a bit about Galaxy’s Edge and what’s coming, nothing can quite prepare you for walking in the land and experiencing it. The story of Galaxy’s Edge takes guests to the planet of Batuu. Batuu is a far-flung destination along the galaxy’s Outer Rim, on the frontier of Wild Space – the uncharted region beyond all known star systems. Batuu is home to Black Spire Outpost, an infamous port for smugglers, traders, and adventurers wishing to avoid any unnecessary … entanglements with the First Order.

We had the opportunity to talk with Project Manager Chad Stachnik, as well as Diego Parras and Jon Georges, all with Walt Disney Imagineering. Jon has over 30 years of experience at Walt Disney Imagineering and has produced many projects around the world, including the recent updates to Fantasyland at Magic Kingdom Park. Jon is currently the Executive Producer of Star Wars: Galaxy’s Edge. What was very clear in talking to them is how much they are personally invested in and love this project. They are fans themselves, and it was clear they have a very high standard for Star Wars: Galaxy’s Edge. 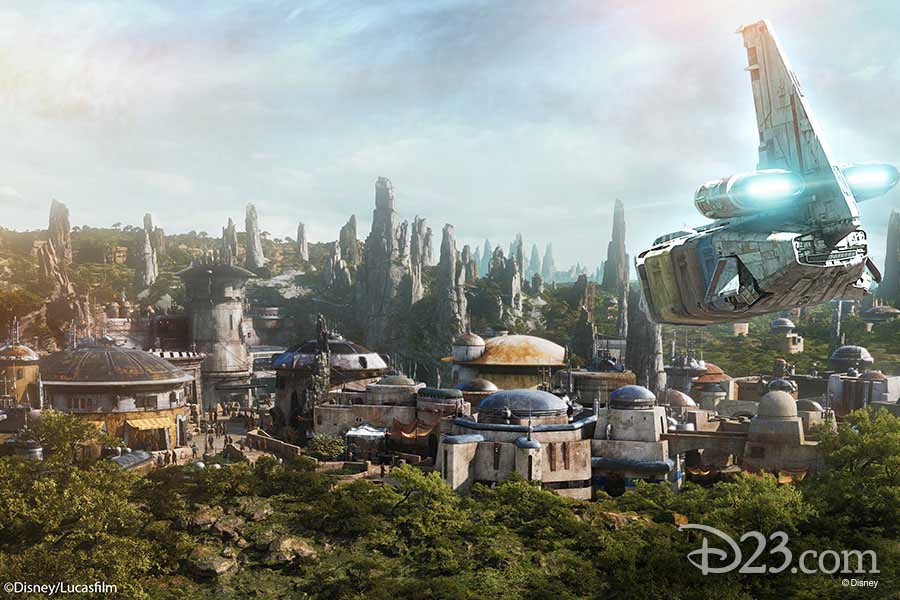 We entered Star Wars: Galaxy’s Edge off of Grand Avenue near the Muppet Courtyard. This is one of two entrances at Walt Disney World, the other being over at Toy Story Land. Disneyland has three entrances, and that is the only difference between the two lands; otherwise, they are the same Batuu in both places. Just inside the entrance is a scale model of the entire land. The Imagineers use this model for reference and inspiration as they create Star Wars: Galaxy’s Edge. After we had a good look at the model, we turned into a large rock tunnel that reminded me of tunnels that go through mountains for a train track. The walls of the tunnel are concrete with specific Star Wars touches along the way.

Diego Parras shared with us that the goal for the entrance was to give guests a wide cinematic shot of the new land as they emerged from the tunnel. The tunnel entrance provides a transition from the feeling of LA on Grand Avenue to the alien world of Batuu. The tunnel, which is curved slightly, hiding what’s to come as you travel to a new world and leave the old one behind. When you leave the tunnel, you get a sweeping view of an ancient forest, the Rise of the Resistance attraction, and the Black Spire Outpost. The first thing that struck me was the enormity of the land. It felt huge, and I was only seeing about one-third of Star Wars: Galaxy’s Edge. It’s also immediately very immersive, and this is on purpose. Chad Stachnik shared that the Outpost is deep within the planet. We looked around, and you cannot see anything else from the surrounding areas at Hollywood Studios—all you see is Batuu. When the land opens, you’ll also get the sounds of the land, the John Williams score, and the characters from Star Wars will add to the fully immersive experience. Much like Pandora – The World of Avatar, you are transported to an alien place, yet this one is familiar because it looks and feels like Star Wars.

Some have wondered why bring an entirely new planet to life in Galaxy’s Edge. Why not recreate Tatooine or Endor? This was intentional and done for a good reason. The Imagineers want you to live out your own new Star Wars story. Batuu allows a familiar yet new experience where you can be immersed and live out your Star Wars dreams. Parras explained that attractions like Star Tours and Star Wars Launch Bay allow guests to celebrate the Star Wars movies we know and love, but Batuu will enable guests to have an active role in the Star Wars universe through visiting the Outpost and the land’s two signature attractions. One great thing is that you don’t need to be a huge Star Wars fan to enjoy this place. It’s going to be new for everyone because it’s not a place in the films.

We got a glimpse of the Black Spire Outpost, home to Ronto Roasters, Docking Bay 7 Food and Cargo, Oga’s Cantina. (Click the links for more detailed information on dining and shopping in Galaxy’s Edge). This marketplace is where the inhabitants of Batuu come to shop, eat, and drink. The food itself is brought in from ships arriving from all over the galaxy. Jon Georges explained that the marketplace features authentic items the residents would buy for themselves. The Droid Depot will allow guests to build their own astromech droids. At Savi’s Workshop, guests will be able to customize and craft high-end lightsabers. The Black Spire Outpost is really an attraction in itself with so much to see and experience. 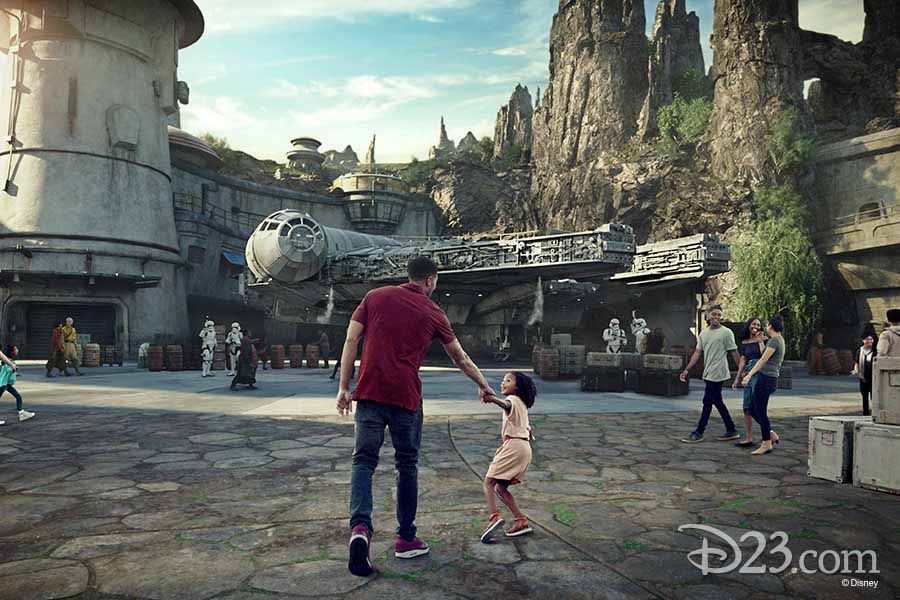 7 – Rise of the Resistance and Millennium Falcon: Smugglers Run

There are two attractions in Star Wars: Galaxy’s Edge that will make dreams come true for many Star Wars fans. How many have dreamed of piloting the Millennium Falcon? Guests will take the controls of the Falcon in one of three unique and critical roles as the ship hurtles through space. Some will be pilots, some gunners, and some flight engineers, creating multiple ways for guests to experience the attraction. Georges shared with us that he rode the attraction just last week and he said it was absolutely amazing. Again, these guys are fans just like us. It gets me so excited to experience this!

From where we were, we could see the Rise of the Resistance that will be opening later this year. It is the most technically advanced attraction ever for Walt Disney Imagineering. Both Georges and Parras emphasized that fact and their pride was evident for everyone involved in the project. This attraction places guests right in the middle of the Rebellion and gives them an active role in the fight against the First Order, including a faceoff with Kylo Ren. The journey takes guests inside a full-size starship and aboard a nearby Star Destroyer.

It’s really tough to put into words how I felt when I walked through the land. I kept saying, “Wow,” over and over again. I immediately felt transported to another world, and it’s not even complete. More landscaping and other items will be added closer to the opening date. It is immersive and emotional. I’ve been a Star Wars fan for most of my life. I have to admit I got a bit teary eyed walking around. Hearing and seeing the passion of the Imagineers as they talked about Star Wars: Galaxy’s Edge only heightened that. I really do think Disney has hit a home run with this addition. It’s like Pandora-The World of Avatar on steroids. Because of my love for Star Wars, being IN Star Wars: Galaxy’s Edge was such a satisfying and emotional experience. Once I get to experience the Outpost and two attractions it will be even more amazing. I can’t wait to live out my own Star Wars story when Galaxy’s Edge opens on August 29, 2019!

Happy Easter! We hope you have a fantastic day! #F