You can always count on a fantastic show when it comes to Disney live entertainment. But on the Disney Cruise Line, Disney cranks up even more magic by putting on fantastic Broadway style shows. These were the absolute highlight of our last Disney Cruise. The three shows we saw were amazing! That’s why we’re so excited about the latest announcement that the Disney Fantasy is getting brand new, out of the world entertainment offerings including an all new stage show! Catch all the details below.

Here are all the details from Disney Cast Member Melanie Curtsinger:

Guests sailing on the Disney Fantasy will be treated to a ‘whole new world’ of dazzling entertainment offerings in 2019! “Disney’s Aladdin – A Musical Spectacular” is premiering a reimagined look, a pair of royal sisters brings some “Frozen” fun to the lineup of the Walt Disney Theatre this fall and a new deck party will give families a once-in-a-lifetime chance to celebrate Mickey’s 90th this summer!

The reimagined version of “Aladdin – A Musical Spectacular” debuts today on the Disney Fantasy thanks to the creative minds of Disney and a team of Broadway’s top artists. Along with an updated script and enriched storylines, the show has brand-new choreography, score additions, puppetry, reimagined costumes, lighting, video/projection design and exciting pyrotechnics. Just in time for the live action movie’s release, this production is sure to delight theatergoers of all ages and will help inspire the next generation of “Aladdin” fans.

Also making its debut in the Walt Disney Theatre this fall is “Frozen, A Musical Spectacular.” This heartwarming tale of two sisters based on the hit film showcases the adventures of Anna and Elsa as they discover the meaning of sisterhood, inner strength and true love. This Broadway-style spectacular, which premiered on the Disney Wonder in 2016, will delight even more guests across the Disney Cruise Line fleet when it joins “Aladdin – A Musical Spectacular” and “Disney’s Believe” aboard the Disney Fantasy on October 26.

And the fun doesn’t stop there! Guests sailing on the Disney Fantasy this summer also have the exclusive opportunity to celebrate 90 years of Mickey with a party for the man of the hour! Mickey and Minnie’s Surprise Party at Sea is a high-energy afternoon deck party that debuts at the beginning of June and continues on all Caribbean and Bahamian sailings through the end of August. Families will join their favorite Disney characters for some fun in the sun as they celebrate Mickey’s 90th in style, complete with special costumes, a song made just for the occasion and plenty of food themed after – you guessed it – Mickey Mouse!

These enhanced entertainment options are only the beginning of the fun that awaits guests on Disney Cruise Line. From Broadway-style shows, deck parties, character experiences, fireworks at sea and themed dining venues that come to life with classic Disney storytelling, there truly is something for everyone at sea this year!

The Disney Cruise Line (DCL) currently consists of four ships, with more ships planned for the near future! Selecting just one ship as the BEST is rather tricky as they all have unique qualities that put them above and beyond most other cruise lines. The Disney Magic first set sail in 1998 with the Disney Wonder beginning its voyage shortly after in 1999. Both ships have a passenger capacity of 2,400 and are very similar in layout. The Disney Magic keeps to the east coast while the Disney Wonder travels in the west coast area. Several years later in 2011, the DCL introduced the Disney Dream followed by the Disney Fantasy in 2012.  Dream and Fantasy are much larger than the Magic and Wonder, as each of their passenger capacities, is 4,000. Both Dream and Fantasy are on the east coast with Port Canaveral as their homeport. All four ships are superb in cleanliness and maintenance as they are cared for non-stop. The service and activities are paramount leaving it difficult to select just one as the best. We will say, however, most polls of DCL travelers say the Disney Fantasy is their top pick!

When people see the price of the DCL, they tend to have sticker shock. It is one of the most expensive cruise options, but you most definitely get what you pay for! The basic price includes your stateroom, meals plus snacks and ice cream, soft drinks and other beverage station drinks, character meet and greets, award-winning entertainment, current in-theater Disney films, and top of the line service. Some things not included are alcohol, signature dining, spa services, and port excursions. The truth is, yes – it’s expensive, but with Disney, you know the kind of experience you are going to get.

3 – What documents do I need to bring?

The real question is where are you headed? The DCL fleet travels to several different ports depending on which ship you are on and when you are sailing. Canada, Spain, Caribbean, Italy, Hawaii, New York, England, Texas… are more – there is no shortage of dream destination cruises with the DCL. The safest bet is always to have a Passport and ID with you when exiting the ship at a port. Whether you are planning to experience one of the many port excursions or just staying close to the ship, once you exit, you’ll need the appropriate documentation to get back on. Follow your cruise guidelines as Disney will provide you with the information you need as to what documentation is necessary.

Simply put… it’s AMAZING! But if that’s not enough – Castaway Cay is Disney’s privately-owned island in the Bahamas. DCL ships are the only ships allowed to port here, making it an island oasis away from the hustle and bustle of life. Pristine beaches and lush landscape, it’s a tropical stop worth exploring for the day at port. Castaway Cay has a family beach and an adult beach, slides, water splash/play area, natural paths, shopping, dining, character meet and greets, and even its own Post Office! If we could live there, we would.

5 – Is there anything for adults on the DCL?

A common misconception is that the DCL is for kids only. This is false in so many ways! With or without kids, the DCL has you covered. There are multiple adult only areas including dining, lounges, and pools for guests 18 and older. There are also several adult only activities and meetups that include anything from dancing to trivia.

Speaking of adult-only time, did you know each DCL ship has Kids Clubs available on board? The kids will have a blast playing games, making crafts, and hanging out with characters. Highly trained Cast Members are readily available to care for your child while you take some adult time as mentioned above. Kids Clubs are in fact FREE including Disney’s Oceaneer Club and Lab (ages 3-12), Disney’s Edge (ages 11-14) and Disney’s Vibe (ages 14-17). Your kids will be asking to go! This is all free, except for the “It’s a Small World” Nursery for ages 6 months – 3 years. There are charges here as this form of childcare is more hands-on with the little ones.

7 – What is Rotational Dining?

The DCL offers what they call “Rotational Dining” and it has become a favorite for many DCL guests. Each night, you’ll have a scheduled restaurant to dine at that is included in your cruise price. You’ll rotate to a different restaurant each night, doubling up on a few restaurants depending on how long you are cruising. This is a great way to experience all the restaurants and their beautiful dining themes. The great part is that your server team moves from restaurant to restaurant with you, so you can expect to see the same sweet faces night after night. They get to know your favorite drinks, what you like and don’t like, and even your kids’ names. It’s an excellent way to dine! 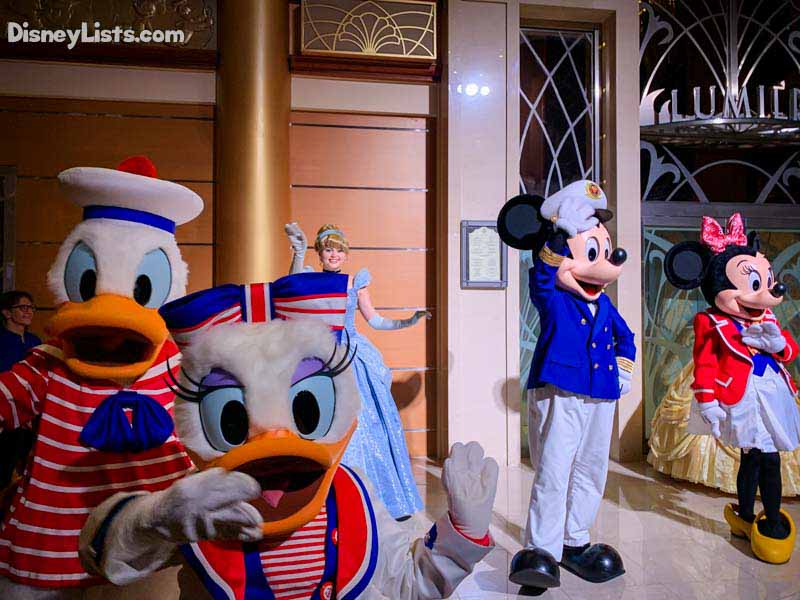 9 – Will I see any characters?

Yes! And lots of them! Character meet and greets are what adds that Pixie Dust on the Disney Cruise Line. Don’t be surprised if you see Mickey Mouse in his Captain suit, Captain Hook stirring up trouble, and even a plethora of Princesses. The DCL App is a perfect guide for the many meet and greet schedules so you’ll know when and where you can find Stitch, Goofy, Minnie, Donald, and so many other Disney pals on board. Plus, the characters change outfits regularly so be prepared to visit characters a second time if you desire.

10 – What type of entertainment is on the DCL?

Maybe it would be easier to ask, what type of entertainment does the DCL NOToffer?! Let’s just say you won’t be bored even on your Day(s) at Sea. While at the port, you’ll have incredible Port Adventures (aka excursions). On the ship, you can count on Broadway-style musicals to be available daily in the Theatre. There are current Disney films you’ll find in the theaters back home being played in the theater on board. Get ready for multiple deck shows, dance parties, and even fireworks. There are live musicians available in the adult lounges and in the grand lobby many of the nights. You can shop till you drop in the numerous gift shops. Play anything from basketball to mini-golf on deck. Relax with top-of-the-line Spa and Salon treatments. Go on a ship scavenger hunt as a detective. Or take a dip in one of the many pools or water coaster. No shortage of entertainment here! You can count on the DCL keeping you as busy or as relaxed as you want.

After years of multiple Walt Disney World vacations, Cindy and Chad's dream of living in Orlando came true in 2010. After friends and family made them their go-to-people for Walt Disney World advice, Cindy and Chad launched DisneyLists.com in August 2015 to share their knowledge and love of Disney. Chad and Cindy have been Disney World Annual Passholders for years, DVC members, together have raced more than 70 runDisney races, and particularly love cruising on the Disney Cruise Line. Chad and Cindy also regularly represent DisneyLists.com at Walt Disney World media events. While attending these events, they get an insiders view of all the new things that have come to Walt Disney World. These experiences have helped them gain knowledge and expertise they happily pass on to their followers. They still can't believe how lucky they are to have such an amazing opportunity and will continue to share Disney with anyone who will listen!
Disneylists.com Newsletter
Follow us on Facebook
Find us on Facebook
Follow Us on Instagram
Unsupported get request. Follow Us on Instagram
DisneyList Tested and Approved Travel Partner