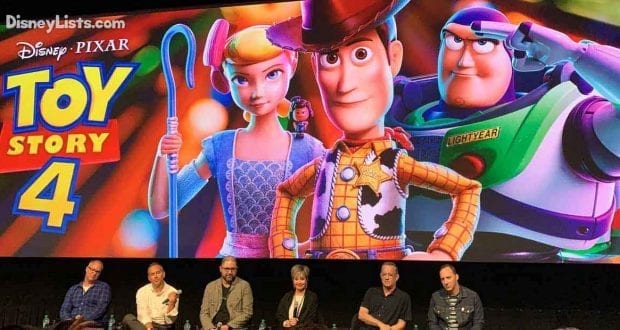 After a nine-year absence, our favorite toys are back with an all-new adventure in “Toy Story 4.” Woody, Buzz, and the whole gang find themselves far from home, discovering new friends—and old ones—on an eye-opening road trip that takes them on to unexpected places. I was able to attend a special media preview screening of the movie last week and talk with the stars of the film. Here is our spoiler-free review of Toy Story 4.

I find it hard to believe that it’s been nine years since we watched Andy give his beloved toys to Bonnie. Toy Story 3 is adored by many fans and felt like the perfect ending to the toys’ journey. They would live on in a new child’s bedroom and get to play out in her imagination. The film was the second Pixar film to be nominated for the best picture Oscar. Though it didn’t win in that category, it did take home the Oscar for best animated feature film. So, for such a great movie with such a perfect ending, is there really a new story to tell? It turns out, yes there is.

We had a chance to sit down with the producers of the film, Mark Nielsen and Jonas Rivera, the director, Josh Cooley, and six stars of the film: Tom Hanks, Tim Allen, Annie Potts, Keanu Reeves, Tony Hale, and Christina Hendricks and discuss Toy Story 4. Tom Hanks brought up his surprise at getting the call for a fourth film. See his reaction in the clip below:

Director Josh Cooley spoke of how much they love these characters and how they love their world. Pixar is built upon Toy Story, and they just wanted to tell a great story. He also added that they felt Toy Story 3 was the end of Andy and Woody’s story, but there was more of Woody’s story to tell.

According to producer Jonas Rivera, who joined Pixar in 1994 as the studio’s first production intern, the filmmakers felt a huge sense of responsibility toward Woody and the rest of the toys. “People love them—they’re like old friends,” he says. “There are people working on this film who say ‘Toy Story’ was the first movie they saw when they were kids. But no matter how old we are, there’s the sense that we’ve all grown up with Woody and Buzz. It’s more than just a movie. These characters have been cemented in the fabric of people’s childhoods and their families.”

I completely agree with that. It’s hard to believe that most of these characters have been around for twenty-four years. When Toy Story 3 came out, my kids were the perfect age for the Toy Story films – they were nine, seven, and six at the time and we all adored it. The trash incinerator scene still impacts me today—I can’t bring myself to throw away toys—so I try to find new homes for them just like Andy. I was a bit wary of going into the movie screening for fear of being disappointed. I love these characters so much. I was so relieved and happy to discover this film is fantastic. I’m so glad they kept going with Woody’s journey and believe you will be too once you see the movie.

Woody (voice of Tom Hanks) has always been confident about his place in the world, and that his priority is taking care of his kid, whether that’s Andy or Bonnie. So, when Bonnie’s beloved new craft-project-turned-toy, Forky (voice of Tony Hale), declares himself as “trash” and not a toy, Woody takes it upon himself to show Forky why he should embrace being a toy. It’s a nice throwback to Woody having to convince Buzz Lightyear in ‘Toy Story,’ that he was not, in fact, a real Space Ranger. Woody’s love for Bonnie is evident, and he is determined to be there for Bonnie, even if it means another toy gets all the attention.

Tony Hale spoke about joining the cast and what it meant for him. Watch below:

Forky is an adorable new character, and he brings a lot of laughs along with him. “Forky is like a newborn,” says producer Mark Nielsen. “He doesn’t know anything about life—he doesn’t even understand why he’s alive or what a toy even is. He makes Woody vocalize what it means to be a toy—what it means to be needed.”

Hale went on to say that “there is a simplicity to Forky that I absolutely fell in love with. The fact that he’s made from pipe cleaners, a spork, and popsicle sticks, and he brings Bonnie so much joy. He’s brought into the world and he doesn’t understand the rules of the universe, he’s very confused when people drop to the ground when humans walk in. He’s kind of always wide-eyed. He’s very present, and I love the simplicity of him. It’s been a huge honor to voice him.”

When Bonnie takes the whole gang on her family’s road trip excursion, Woody ends up on an unexpected detour that includes a reunion with his long-lost friend Bo Peep (voiced by Annie Potts). After years of being on her own, Bo’s adventurous spirit and life on the road show that she’s a lot tougher than her delicate porcelain exterior seems to imply.

It was great to see Bo Peep back with a great new confidence and outlook on life. Annie Potts described Bo Peep as a “new, improved, emboldened, courageous, seasoned gal.” “Bo is everything that we want to be,” says Potts. “She is independent and courageous and funny and smart and able to tackle it all on her own. Her life hasn’t been easy, but whose life is? She is an excellent model of making it in the face of adversity.”

At first, I didn’t know what to think of Bo Peep, because her outlook for toys is different than Woody’s. But throughout the movie, her loyalty to and love for Woody shines through. I think many will be falling in love with her character all over again.

Buzz Lightyear and Woody’s friendship has come a long way, and that friendship continues to grow in Toy Story 4. According to Tim Allen, who returns as the voice of Buzz, the new story takes their unlikely bond even further. “Buzz wants Woody to do the right thing—but sometimes doing the right thing is really, really hard to do,” says Allen. “Loyalty is fundamental to Buzz, and this story takes loyalty to a new level.”

“Toy Story” is rooted in that key friendship. Says producer Mark Nielsen, “The relationship between Woody and Buzz is core to the ‘Toy Story’ films. It starts off a little rocky in the first film, but a friendship is born. And that builds over the years and through the films. They trust each other, understand each other, and support each other. It’s such a critical relationship in the series and in ‘Toy Story 4,’ we take it to an even deeper level.”

By using his “inner voice,” Buzz helps Woody throughout the movie and is definitely there for him at the end. It was wonderful to see these two characters together again. 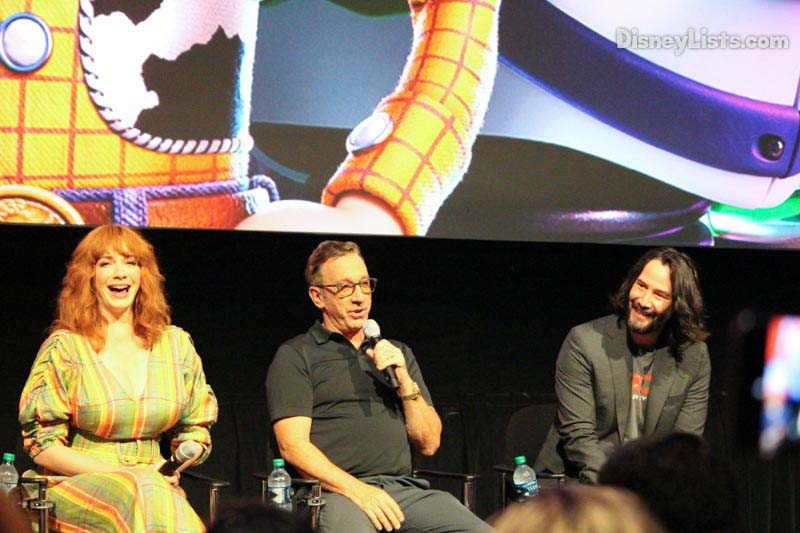 “Toy Story 4” welcomes other new characters that add so much to the film, and the actors who voiced them were a perfect fit. Gabby Gabby, who is not exactly what she seems, is an adorable, talking pull-string doll from the 1950s. Unlike Woody she’s never experienced the love of a child because of a manufacturing defect in her pull-string voice box has left her sounding a bit frightening. For the last sixty years, she has been forgotten in the depths of a jam-packed antique store surrounded by a band of voiceless ventriloquist dummies. These dummies were especially creepy, yet it worked so perfectly. Gabby Gabby knows someone will want her if only she can find a working voice box to repair hers.

Christina Hendricks voices Gabby Gabby. “It became obvious right away that Christina was the perfect actress to play Gabby Gabby,” says director Josh Cooley. “She has the ability to sound inviting and friendly, then subtly become cold and terrifying in just a few words. It still gives me chills when I see Gabby’s introduction in the film.”

Duke Caboom is another new toy that adds so much to the movie. He is a 1970s toy based on Canada’s greatest stuntman. Riding his powerful Caboom stunt-cycle, Duke is always prepared to show off his stunt poses with confidence and swagger. However, we learn that Duke is haunted by something in his past: He has never been able to do the awesome stunts advertised in his own toy commercial. For years, Duke has been sitting in an antique store, continually reliving the failures of his tragic past.

Duke Caboom is voiced by another great Canadian, Keanu Reeves. “The first time Josh [Cooley] and I talked with Keanu about the role, Keanu became Duke Caboom,” says producer Jonas Rivera. “Keanu was asking great questions that dug deep to find the soul of the character. At one point he stood up on the table in the middle of Pixar’s atrium and struck poses while proclaiming victory. It was so funny. It’s all in the movie, and it’s all Keanu.”

Showing a more sensitive side is a bit different than the roles Keanu is used to playing. One journalist asked Keanu how he “unleashed his cry-baby side,” which got lots of laughs, including from Keanu. Watch his reaction and answer below:

6 – The Times They Are a Changing

“Toy Story 4” embraces the theme of change yet again as Woody learns to navigate the new dynamics in Bonnie’s room and beyond. Director Josh Cooley summed up the theme as “transition.” The characters are going through or struggling with transitions. “Woody is struggling with moving from Andy’s room to Bonnie’s room. Forky doesn’t want to transition at all. Gabby Gabby is stuck in time.” It’s one of the reasons they put her in an antique store—things are not changing around her. “Even Duke is haunted by his past.” That is how they approached the film when working on it—all of the characters are dealing with transitions.

Transitions in life are something we can all relate to, and that’s one of the reasons why this film works so well. The toys are experiencing things that we have experienced: fear, anxiety, loss, trying to find our purpose, and dealing with the challenges that face us. Because I care for these characters, it was easy to get wrapped up in the story and cheer them on in their struggles.

7- To Infinity and Beyond

The ending of the movie was a surprise to me. I was not prepared for the emotions I felt at the conclusion of the film. We won’t spoil anything, but the ending impacted both Tim Allen and Tom Hanks. During the press conference, Allen and Hanks spoke about how they felt about the end and how it affected them. Much like Toy Story 3, it’s a bittersweet ending that will leave you with mixed emotions.

We can’t recommend this movie enough. We’ve already had some of our fans express concern that the Toy Story franchise would be “ruined,” and they wondered if it wasn’t better to leave this it alone. As you will learn, Woody’s story wasn’t finished yet, and I’m so glad that we got another glimpse into the lives of our favorite toys.