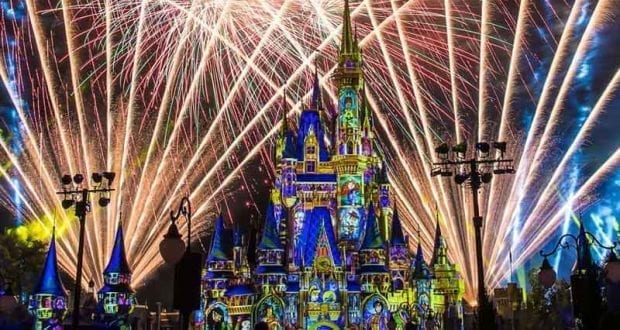 If you’re anything like me, you continuously find ways to bring a taste of Disney World into everyday life. The best way for me to cure the Disney homesickness is by listening to music from the parks and resorts. I can listen to theme park background music, monorail spiels, and attraction ride-throughs until my heart yearns to be back in my happy place. All I have to do is pop in my headphones during some downtime at work, or blast the music through my car stereo, and my spirits instantly lift. Luckily, I’ve been able to curate an amazing Disney World playlist by scouring through Apple Music and Disney Park Albums; a lot of songs from the parks can be accessed via the Play Disney Parks app (if you have an Apple Music subscription). Two of my favorite albums for Disney World songs are the Walt Disney World Official Album (2013) and Walt Disney Records Legacy Collection: Disneyland (2015).

This is a newer addition to the Main Street U.S.A music loop that runs through the iconic Magic Kingdom entrance. It premiered at Disneyland in early 2012, and at Disney World later that same year. It joined period pieces such as “Meet Me in St. Louis,” and “Maple Leaf Rag.” However, “Married Life,” from the film Up (by composer Michael Giacchino)fits perfectly into the Main Street theming; it feels like a classic tune that’s been around for ages, and instantly makes me feel like I’m walking toward the castle, past trolley dancers with twirling parasols and harmonizing Dapper Dans. Normally, this music makes me tear up, but I love the way it’s orchestrated specifically for the musical style of the time period.

Soarin’ is an amazing attraction, and not only because of the unique ride system and sensation of flying. The music played throughout the original attraction is by composer Jerry Goldsmith, and the score for the new iteration of Soarin’ (Soarin’ Around the World) is by Bruce Broughton. Broughton heavily based his score on Goldsmith’s original composition, and most of the familiar notes are still there. The music starts with an amazing crescendo as the dark screen opens to show visitors the amazing vistas of Switzerland, Sydney Harbor, and Fiji (among many other locations). Wistful chimes can be heard as you make your way over the Great Wall of China and the Taj Mahal, and joyous fanfare plays over the fireworks during the finale. This music can also be heard throughout Epcot’s entrance plaza. 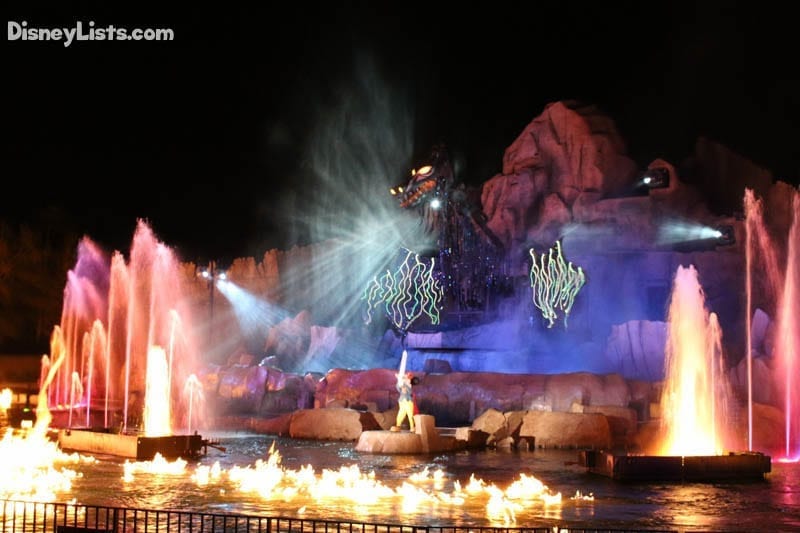 Fantasmic! Is such a fun show, and listening to the soundtrack at home is almost as good as seeing it in person (okay, not quite, but it’s still good). The score was composed and arranged by Bruce Healey, and it matches perfectly to the constant array of lasers, fireworks, parade floats, and puppets that appear on stage, on boats, and on the water. My favorite pieces of music are from the beginning and the end of the show. I love Mickey’s first entrance, and the dance he does with his hands waving side to side. Then, at the end, the soundtrack is simply magical. You can almost hear Mickey exclaim, “Some imagination, huh?” The music builds until the finale fireworks go off with a blinding pop, and you can practically hear the theater bursting into applause. Of course, the main theme is combined with classic Disney songs throughout the show, but I feel like this only adds to the immersive, breathtaking experience.

Every Disney fan is familiar with this classic tune. Whether you love it or you hate it, you can’t deny that this is an iconic Disney song. Brothers Robert B. Sherman and Richard M. Sherman worked with Walt on this attraction as his staff songwriters, and Walt said he wanted one song that could easily be translated into many languages. They then wrote, “It’s a Small World (After All),” in order to promote the message of peace between all nations. The attraction, which was initially named “Children of the World,” was renamed to “It’s a Small World,” after the Sherman Brothers’ song. I love that the soundtrack includes a chorus of children and verses sung in different languages. Everyone knows this song, and every time I hear someone complain about the music after riding the attraction, I feel like giving them a history lesson on the music.

Believe it or not, there is something to listen to on Spaceship Earth besides Judy Dench’s narration (not that that isn’t great). During this 15-minute ride through the journey of human communication, you can hear the score by Bruce Broughton. This music was included on the Walt Disney World Official Album in 2013, and every time I listen to it, I feel like I’m actually back inside the famous geodesic sphere. The music changes subtly throughout the different show scenes; you hear the haunting, slightly futuristic notes as you begin your ascent, the smooth tones of the Egyptian scenes, the chorus of the Renaissance, and the crescendo as you reach the top of the globe and see planet Earth in all its glory. If you want the full experience, you can download the spiel too, and then just sit back, close your eyes, and pretend you’re at Epcot!

Dinosaur is one of my favorite attractions at Disney World, and being a museum nerd, I love the theming of the queue. The ride may be a turbulent journey to the past, but the queue provides a calm, modern walkthrough of a dinosaur exhibit. As you pass by fossils, paintings, and a large Carnotaurus skeleton, you can hear smooth background music that would not be out of place at an actual Natural History Museum. Richard Bellis is the composer for this score, and it almost provides a false sense of security as you approach the pre-show and learn about the details for your “breathtaking” journey to the less-scary age of the dinosaurs (until Dr. Seeker gives you a daring secret mission). The attraction was formerly known as “Countdown to Extinction,” which is the reason for the abbreviated song title. This music always sends tingles down my spine, and never fails to make me want to hop into a time rover.

4 – Happily Ever After (Jordan Fisher and Angie Keilhauer)- Magic Kingdom

I absolutely adore the Happily Ever After fireworks, even though I didn’t think I would enjoy a fireworks show as much as Wishes. Happily Ever After is a masterpiece blend of projections, lasers, pyrotechnics, fireworks, and, most importantly of all, music. The soundtrack ties everything together, and even if you manage to get a nice view of the castle, it won’t matter unless you can hear the songs nice and loud. The theme song to this show always makes me smile; performed by Jordan Fisher and Angie Keilhauer, it is definitely a pop song. But combined with the classic Disney songs played in the show, it makes the fireworks feel both more modern and more empowering. 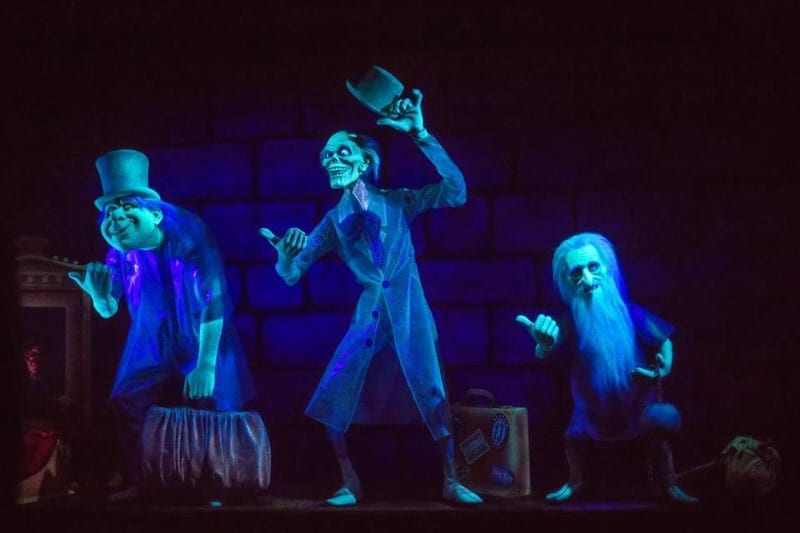 “Grim Grinning Ghosts (The Screaming Song))” is the theme for the Haunted Mansion, one of the best (in my opinion) attractions at Disney Word. The song was composed by Buddy Baker, with lyrics by X Atencio, who also wrote “Yo Ho (A Pirate’s Life for Me).” It sounds cliché to use the word “haunting,” but this music always gives me goosebumps. I can practically hear the monotone drawl of the Ghost Host, and I love how the fun lyrics contrast against the tubular bells, theater organ, and spooky sound effects used in the score. There are a ton of variations on this theme song, and I think any one of them would do if you’re looking for a song that drives away the post or pre-Disney blues.

2 – Flight of Passage Ride Through- Pandora: The World of Avatar, Animal Kingdom

This is the newest addition to reach Apple Music, and I’m so glad Disney decided to release it. James Horner did the original score for the film Avatar, but for the Flight of Passage attraction, he’s joined by Simon Franglen. They captured everything from the ride- you can hear the sounds of the initial link taking place, the chants of your Na’vi guide as they lead you out on your flight, the soft music of the bioluminescent cave, and the triumphant finale as you take one last dive through the forests of Pandora. Even if you haven’t experienced the ride, you can get a nice taste of what it’s like as you listen to the soundtrack. The only problem I see with this score is that’s too short! If I close my eyes, I can definitely feel the wind on my face and hear the cries of my fellow “Ikran” riders.

Music has been an integral part of Star Wars from the moment the iconic themes of Academy Award-winning® composer John Williams first introduced fans to this galaxy. The music for Star Wars: Galaxy’s Edge continues that tradition with a suite of all-new Williams-composed themes written especially for the land and its attractions. Along with a collection of original cantina songs created by composers and songwriters from around the globe, this new music deepens guests’ connection to the land as Williams complements and builds upon the fanfares he created for the Star Wars films. Williams was nominated for a Grammy by The Recording Academy in the Best Instrumental Composition category for “Star Wars: Galaxy’s Edge Symphonic Suite” and he won! The song can be streamed on Apple Music.