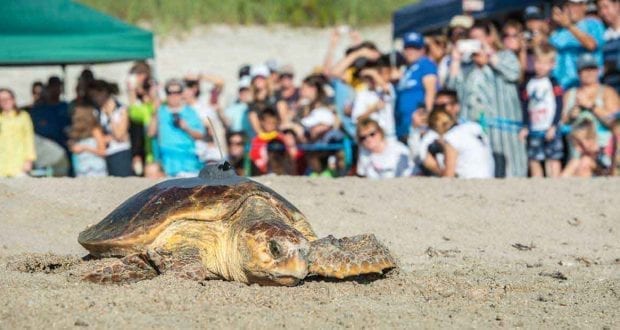 Loggerhead sea turtle Ariel, named after the princess from Disney’s “The Little Mermaid,” makes her way back to the ocean after being fitted with a satellite telemetry transmitter to track her migration patterns. Credit: Disney

Posted by: Arielle Tuan in News

Every year at Disney’s Vero Beach Resort, researchers from the Sea Turtle Conservancy (STC) and Disney’s Animals, Science and Environment (ASE) team release two loggerhead sea turtles into the ocean as part of the Tour de Turtles “migration marathon.” Tour de Turtles follows the migration of sea turtles from their nesting beaches to their feeding ground. By learning more about the loggerheads and their journeys, researchers from STC and ASE can help raise awareness about the threats that face sea turtles each day. This year marked the 12thannual Tour de Turtles, and luckily, I was able to catch all of the action at Disney’s Vero Beach Resort!

6 – The Turtles Have Names…and a Mission!

5 – Tour de Turtles Does a LOT to Help Sea Turtles

Tour de Turtles follows the migration of sea turtles from their nesting beaches to their feeding ground in order to study how far each one swims. The one to swim the furthest distance wins, but both turtles do their part in raising awareness. The data collected during Tour de Turtles helps researchers, conservationists, and governing agencies make more informed decisions about sea turtle conservation methods and policies.

The event launched in 2008, and through Tour de Turtles, “STC has identified different foraging behaviors and regions, seasonal movements based on water temperature, and identified new areas that should be classified as critical habitat for loggerhead turtles” (David Godfrey, Executive Director of the STC). More information is available on the Tour de Turtles website at www.tourdeturtles.org. 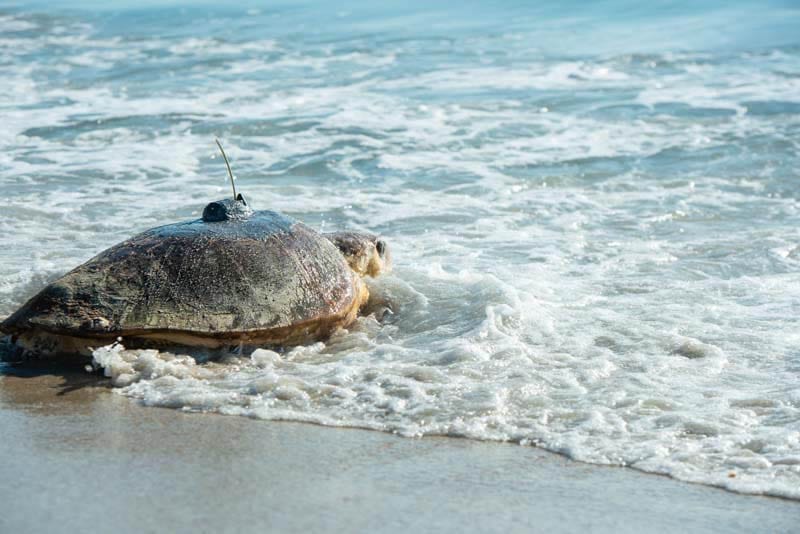 4 – Disney Aids in the Conservation Efforts

Since Tour de Turtles began, STC and Disney have partnered to study twenty loggerhead sea turtles outfitted with satellite transmitters and released from Disney’s Vero Beach Resort. The Disney Conservation Fund has also directed more than $3.5 million to help global sea turtle efforts and ensure a healthy population. David Godfrey remarked how Disney has been an invaluable partner to the STC for twelve years, and that “with Disney’s support of the Tour de Turtles program, we have learned new information vital to the protection of sea turtles in Florida.”

3 – Guests at Disney’s Vero Beach Resort Can Get Involved

Vero Beach is one of the most important turtle-nesting habitats in the western hemisphere. On the morning of the loggerhead release (which took place on Saturday, July 27th this year), Disney’s Vero Beach Resort hosted family activities focusing on sea turtle conservation, showing guests ways that they can help protect sea turtles (one of the biggest ways is to reduce the use of plastic). Disney Vacation Club members and guests staying at the resort during this time also have the opportunity to join the team on turtle conservation and outings to observe the sea turtles and learn ways they can get involved.

2 – The Sea Turtles are Tracked and Studied

Satellite transmitters are attached to the shells of the sea turtles, and the transmitters send back important data about the sea turtles’ migration habits. This information helps researchers and scientists in their efforts to maintain the turtle population. Before the event, guests had the chance to see the turtles getting fitted with their satellite telemetry transmitters. The sea turtles are tracked for approximately three months as they race to complete their turtle marathon. This confirms the statement that was repeated by many during Saturday’s event: saving sea turtles is also a marathon, not a sprint! 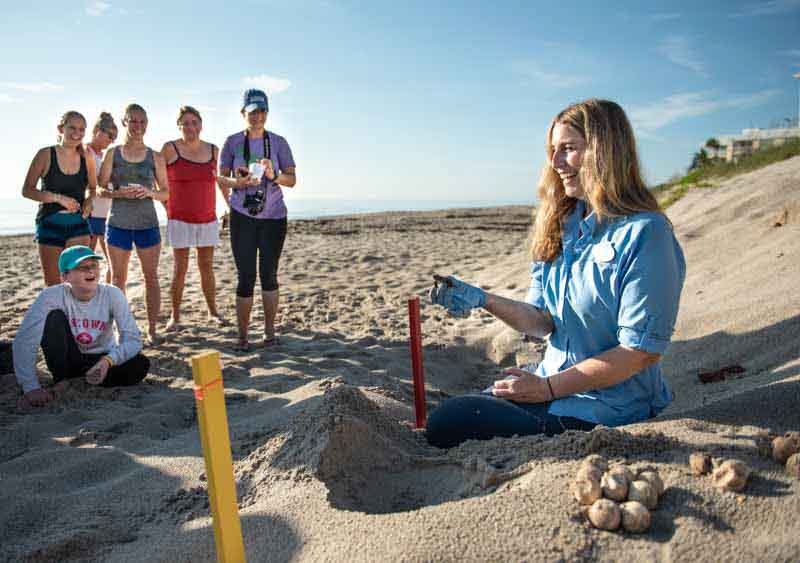 1 – You Can Learn More about Sea Turtle Hatchlings

Guests at Disney’s Vero Beach Resort also had the chance to see sea turtle hatchlings, after an inventory was taken of recently hatched nests along the beach. These hatchlings were released into the ocean after Ariel and Ursula had departed for their journeys (though most of the hatchlings needed a little guidance from Disney Cast Members to enter the ocean safely). It was very cute and reminded everyone in attendance that we need to do all we can to protect these hatchlings and their homes.