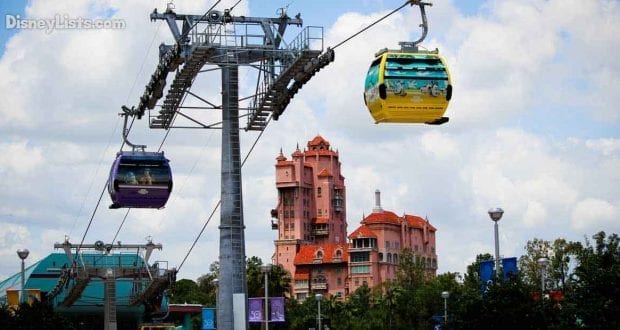 We’ve been eagerly awaiting the opening of the Disney Skyliner since the project was announced back in 2017! It’s been a lot of fun seeing the stations being built and more recently, catching the Skyliner in action as its being tested. That’s why we’re so excited that Disney has finally annoucned the opening day of operation for the Skyliner! Catch all the details below!

The dawn of a new era in Disney transportation is right around the corner! On September 29, Disney Skyliner gondolas will take flight and officially begin transporting guests around Walt Disney World Resort.

As many of you have seen, this state-of-the-art transportation system offers a new way to experience the resort with amazing views only available from the sky.  Disney Skyliner connects Disney’s Hollywood Studios and Epcot to four resort hotels- Disney’s Art of Animation Resort, Disney’s Pop Century Resort, Disney’s Caribbean Beach Resort and the new Disney’s Riviera Resort scheduled to open in December 2019. 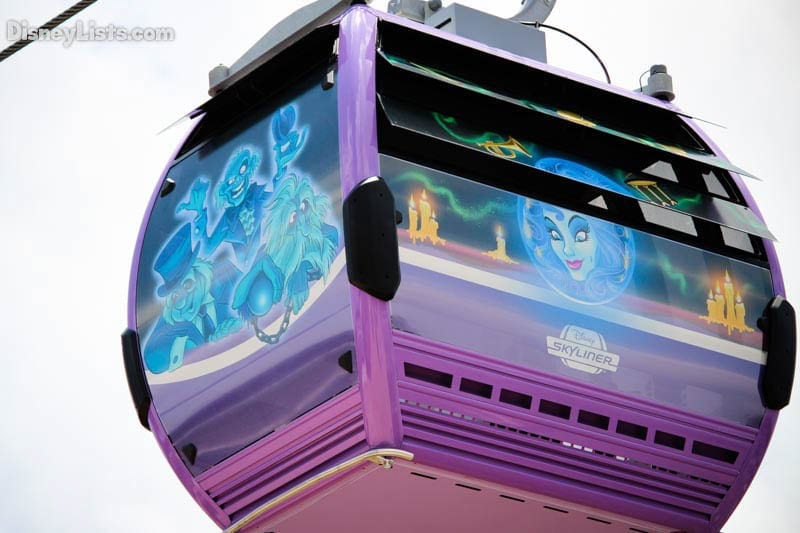 Some Disney Skyliner cabins feature graphics based on Disney films, attractions and characters. We previously featured a few of the character cabins on the Disney Parks Blog, including those with Mickey Mouse, Minnie Mouse, Pluto and Chip & Dale. Other Disney stories taking flight with guests include:

Before you know it, Disney Skyliner will be floating guests across Walt Disney World Resort!

RELATED ARTICLE: The Disney Skyliner at Disney World – What We Know So Far

Just when we think Disney has thought of it all – they go and surprise us with some new, ingenious plan! Disney is well aware that as the crowds increase with new attractions, lands, and resorts on the horizon, they must prepare for the getting guests to and from the parks. So, here we introduce another form of Disney transportation – the Disney Skyliner! While we wait for the Disney Skyliner to officially take to the sky, we anticipate transportation that is convenient, all while offering picturesque views of the Walt Disney World Resort. Let’s chat about what we know so far about the Disney Skyliner!

Disney’s transportation has always been a favorite of ours. Not only is it super convenient, but most forms of Disney transportation are free! Currently, Disney offers bus, boat, Monorail, and the newer Minnie Van Service (which does have a fee). Well, now we are thrilled with the great anticipation of the Disney Skyliner – a point-to-point gondola transportation system. The gondola system allows guests to board an enclosed cabin where they will glide through the sky on a steel cable from one station to another. You may remember the days of the “Skyway” at Magic Kingdom? While the Skyway transferred guests across Magic Kingdom until it closed in 1999, the Skyliner is the same idea – just in a much more modern and expansive way!

The rumors about a gondola-style travel system coming to Walt Disney World first began in February 2017 when Disney filed a building permit for “V”- shaped structures that were rumored to look like gondola stations. When the D23 Expo rolled around in July 2017, Disney Parks Chairman, Bob Chapek confirmed the Walt Disney World Resort was, in fact, getting a gondola form of transportation, to be called the Disney Skyliner. No time was wasted after that, as construction began in late 2017. The anticipation and excitement continue to grow as we regularly check out the incredible progress being made!

By checking out the Disney Skyliner layout, we’ve learned there are a total of six stations for the gondola system with five of them being stations to load and unload, and one being a turn station. If starting off at Disney’s Epcot, the mapped out path the gondola system is proposed to take is as follows:

The Skyliner cabins will feature all our favorite Disney characters designed on the outside of the cabin. Characters Disney has mentioned or shown in art renderings include the “Fab Five” characters, Beast and Belle, and Hitchhiking Ghosts. The cabins will seat up to 10 guests per cabins. While this doesn’t seem like many people, it is still suspected this form of gondola system can transport 3,000+ people in one hour! It has been confirmed that the Skyliner will not have air-conditioning. With the Florida heat, this sounds like it will be painfully uncomfortable but are sure Disney will have proper ventilation that will help the breeze benefit the air in the cabin! We also know the cabins will have an audio system allowing for announcements and safety information, much like the Monorail.

Here are some details from Disney Cast Member Jeremy Schoolfield on the design of the gondolas:

Several gondolas will be adorned with graphics based on Disney films, attractions, and characters. So for example, you may jump into a gondola where from the ground it will look like Mickey Mouse, Minnie Mouse, Pluto or Chip & Dale are riding along with you. Several Disney animated films will be represented, including “Beauty & the Beast,” “Frozen,” “Lilo & Stitch,” “Moana,” “Peter Pan,” “The Princess and the Frog,” “Ralph Breaks the Internet,” “Snow White and the Seven Dwarfs” and “Zootopia.” 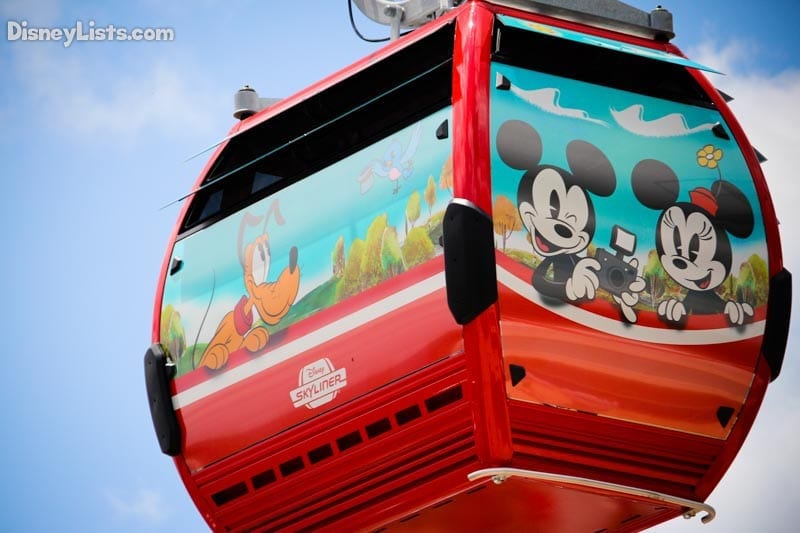 The other themed gondolas that will be part of the system include:

Check out over 45 photos of the character gondolas here!

Disney has announced that the Skyliner will open on September 29 2019!

In the meantime, we’ll just have to keep daydreaming about the beautiful views we can expect to see from our gliding cabin!