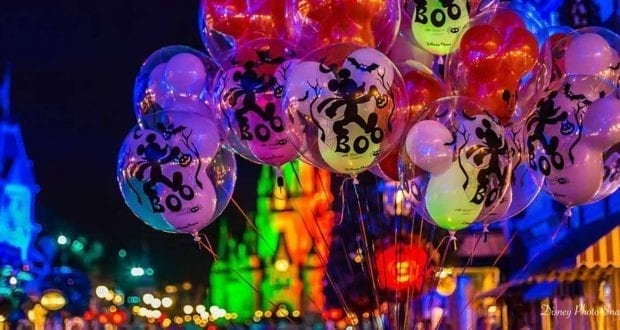 Posted by: Lauren Repei in Around the World, Special Events & Holidays

Even though temperatures are still in the mid to upper 90’s, once the end of August comes, fall and Halloween are in full swing at Disney World. One of the most popular parties or ticketed events at Disney World plays a big part in creating the Halloween atmosphere, and that is Mickey’s Not So Scary Halloween Party. And this party is just what it says, not scary at all, so it’s fun for the whole family and is one of the best times to visit Disney World. Here are ten things to know about the Mickey’s Not So Scary Halloween Party in 2019.

This Halloween party has been at Disney World for over 20 years now. Originally, back in 1975, the Halloween celebration was held at what is now Disney Springs. Following that was the Resort Halloween Party at the Contemporary. The very first Mickey’s Not-So-Scary Halloween Party debuted in October 1995 and was only held on one night, and the cost of the ticket was only $16.95! Since 1995, the party has grown and now Disney has the party on multiple nights. In 2015 there were 25 parties, in 2016 there were 29, in 2017 32 total parties, in 2018 34 parties, and now in 2019–36 total parties!

9 – Go as Early as Possible

If you can, go to Mickey’s Not-So-Scary Halloween Party in September, because it tends to be cheaper and less busy. The closer you get to Halloween, the busier (and more expensive) the party gets. Here are the remaining party dates for 2019:

Pumpkins and Jack-O-Lanterns decorate Magic Kingdom, especially along Main Street U.S.A. Look up at the windows and the balconies lining Main Street, there are 90 hard-carved pumpkins each with a different theme, so make sure you stop to admire them and maybe snap a picture or two. Disney does an amazing job creating a wonderful party atmosphere and these pumpkins do the “trick!”

One of the highlights of the party is Mickey’s “Boo-to-You” Halloween Parade. The parade kicks off with a ride by the Headless Horseman himself. He is followed by a collection of frightening floats featuring Disney characters in Halloween costumes. There have been some new additions to the parade this year. The best new addition is the Spectral Bride from The Haunted Mansion. She appears in the parade alongside waltzing spirits and those famous Hitchhiking Ghosts. There is also a new collection of Tomorrowland themed floats with Pixar pals including The Incredibles and designer extraordinaire Edna Mode, as well as Buzz Lightyear and alien explorers on a planetary playset float inspired by Pixar’s Toy Story films. The second parade tends to be less busy, but you’ll still want to line up at least 30 minutes before to get a good spot. 6 – Sorcerers of the Magic Kingdom

If you are a fan of this wonderfully fun game at the Magic Kingdom, this party is a great time to visit. There are cards that are exclusive to this party that guests can only get if they attend. When an “apprentice” uses this card to cast a spell in the game, dozens of magical donuts appear. You’ll receive the exclusive card in addition to the regular Sorcerers of the Magic Kingdom packs you’re given. Guests must register to play with their party tickets and event wristband in order to get one. The cards also change year-to-year.

One of the many things that make this party so special are the characters you can meet. You can meet the classics, but with a Halloween Twist. In years past, Minnie has dressed as a witch, Mickey has been a scarecrow, and Winnie the Pooh even has worn a costume! Past parties have seen Tarzan and friends, Moana, Captain Jack Sparrow, Jack and Sally from the Nightmare Before Christmas, Cruella DeVil, Lotso, as well as other classic characters. Make a point of seeing the characters right when the party starts at 7 pm. These lines do get long. Some characters, like Jack and Sally, come out early – as early as 5:30 pm – so line up as soon as you get there.

Photographers are also haunting special spots to capture your “boo-tiful memories.” Guests can receive special Halloween-themed Magic Shots and Animated Magic Shots during Mickey’s Not-So-Scary Halloween Party. Visit any of the PhotoPass locations in Magic Kingdom park to find out which “bewitching Polter-Guests” will magically materialize in your photos! Check the Party times guide for exact locations of the magic shots.

Click here for the Disney PhotoPass guide for the 2019 Mickey’s Not So Scary Halloween Party.

The new “Disney’s Not So Spooky Spectacular” lights the night sky during the witching season in a spellbinding display playing across the heavens. As host of the spectacle, Jack Skellington from Tim Burton’s “The Nightmare Before Christmas” spins a not-so-scary tale about how anything can happen on Halloween night.

Jack’s ghost dog, Zero, brings everyone along on a trick-or-treating adventure where four friends – Mickey Mouse, Minnie Mouse, Goofy, and Donald Duck – find themselves drawn into a haunted house. Encounters with dancing skeletons, waltzing ghosts, and wickedly troublemaking Disney villains make for a hair-raising adventure. It all comes to life with state-of-the-art projection effects, lasers, lighting, and dazzling fireworks. You don’t want to miss this one!

Returning again this year is the “Hocus Pocus Villain Spelltacular” show! Disney villains will create a Hocus Pocus Party Potion that will cast a spell on everyone in Magic Kingdom! Expect to see the Sanderson Sisters (from “Hocus Pocus”), Dr. Faciller, Oogie Boogie, and Maleficent, as well as other Disney villains! Combine them and other great Disney villains with amazing dancers, wild visual projections and otherworldly special effects to make Hocus Pocus Villain Spelltacular a not-to-be-missed Halloween treat! This show is performed multiple times at the Castle Forecourt Stage multiple times throughout the evening.

Disney never disappoints when it comes to special desserts and snacks during the holidays or special events, and Mickey’s Not-So-Scary Halloween Party is no exception. This year Disney has scared up some fantastic treats. Here is a rundown of the treats you can find! Another highlight of the party is stocking up on the limited merchandise. There are plenty of pins and t-shirts to satisfy any guest. The best locations to find these items during the event is Emporium on Main Street USA and Big Top Souvenirs in the Storybook Circus area of Fantasyland. Frontier Trading Post in Frontierland will also off the event pins.

Check out some of the merchandise you can purchase this year below:

A big thing to be aware of is that FastPass+ reservations are not available during the party, but it’s okay because there tends to be less of a need for them. FastPass+ can be used from 4 pm-6 pm, but not after. Most guests tend to participate in the special events and experiences around the park, so the line-ups for the rides are not as long.