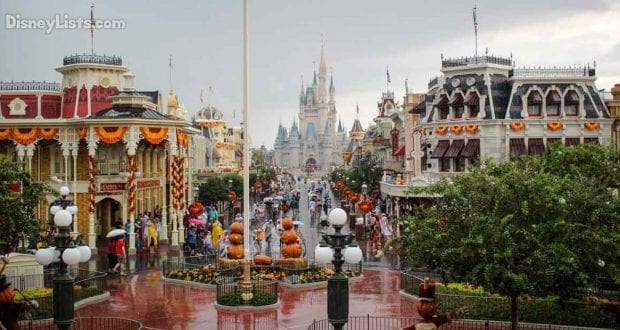 Hurricanes and Disney World – What You Need to Know

Central Florida is no stranger to severe weather. Being the lightning strike capital of the world, those that live in Central Florida have come to expect the afternoon thundershower as a normal part of life. But what about when the weather turns really nasty and a hurricane is barreling toward Disney World? Knowing how good Disney is at the smallest of details, it’s not surprising that Disney World has plenty of safety procedures in place for guests and cast members alike during such a weather event. Here is what you need to know about hurricanes and Disney World.

The hurricane season begins June 1 and runs through November 30. Usually, a hurricane in June or July is rare, but it can happen. Hurricanes in August and September are more likely. And while the likelihood decreases, hurricanes in October and November are possible. In recent years, Hurricane Matthew in October 2016, Hurricane Irma in September 2017, and Hurrican Dorian in September 2019 have impacted Disney World operations.

2 – Past Closings at Disney World

It is rare, but hurricanes have prompted closures at Disney World. Disney World, Universal and Sea World all closed for the first time ever in 1999 as Hurricane Floyd threatened Florida in September of that year. The storm changed course and did not impact the area. In 2004, the big three closed during a string of hurricanes: Charley (August), Frances (September) and Jeanne (September). Frances caused the most problems and closed several attractions for two days. Animal Kingdom and Disney’s Hollywood Studios (at that time MGM Studios) closed for three days. Charley only affected the parks for one day. Hurricane Matthew in 2016 closed Disney World for one evening and a full day because of the threat to the Orlando area in early October. Hurricane Irma, a category 4 hurricane that hit Central Florida directly in September 2017, closed Disney World Parks for two full days. Other events like the second night of Night of Joy and Mickey’s Not So Scary Halloween Party also were canceled. More recently, in September of 2019, the threat of Hurricane Dorian resulted in the parks and Disney Springs closing early on just one day, and Disney After Hours at Disney’s Animal Kingdom was canceled.

If a hurricane warning is issued by the National Hurricane Center for the Orlando area—or for your place of residence—within 7 days of your scheduled arrival date, you may call in advance to reschedule or cancel your Walt Disney Travel Company Magic Your Way vacation package and most room-only reservations (booked directly with Disney) without any cancellation or change fees imposed by Disney.

If you have products and services provided by third-party suppliers included in your vacation—such as airlines, hotels, car rental agencies or vacation insurance companies—you will continue to be responsible for any non-refundable payments, as well as cancellation or change fees assessed by those suppliers. The policy does not apply to certain special events or dining experiences.

This policy also applies to Disney’s Vero Beach Resort or Disney’s Hilton Head Island Resort in the event a hurricane warning is issued for those destinations.

If you need to cancel a reservation due to a hurricane you need to be aware of the rescheduling policy. Here is the policy:

We cannot guarantee the availability of similar accommodations for the new travel dates. All amounts you paid to Disney for rooms, theme park tickets, dining plans, and other Disney products and services will be applied toward your new reservation.

Any discounts or special offers applicable to your original confirmed vacation will not apply to the rescheduled vacation travel dates. You are responsible for applicable package pricing for the new vacation dates.

5 – Riding Out the Storm in Disney World

What if you happen to already be on property when a hurricane is approaching or affecting Disney World operations? If you are able to get out of a storm, it’s not only the safest option but will also reduce the strain on limited resources. However, with hundreds of thousands of visitors in Orlando at any given time, many of whom have flown in, what if you are unable to leave? When the State of Florida declares a state of emergency officials begin working to ensure Disaster Relief Centers are manned by professionals ready to offer services as needed. In the most extreme and unlikely situation, guests would be evacuated off Disney property to these secure locations. The more likely scenario would be guests waiting out the storm in their Disney Resort.

As hurricanes approach, the resorts prepare for handling guests in the event of a direct hit. Disney World will have supplies and personnel on hand to ensure guests have adequate supplies such as bottled water and food in the event of power outages. In the days ahead of the storm, guests might prepare ahead of time by purchasing their own packaged food and bottled water for their own peace of mind. Disney World has always kept the safety of their guests a top priority, and during a hurricane, that doesn’t change. Be assured that Disney will do all that it can for their guests.

6 – Cinderella’s Castle will be Dismantled Prior to the Storm

Just kidding. This is a complete (though persistent) myth. The myth started with the circulation of a famous photo of the castle being constructed with the entire top spire being lifted into place with a crane. It didn’t take long for the hurricane rumor to start. While the spires on the castle can be removed, it takes several days and a large crane to do so, neither of which is practical when a hurricane is quickly approaching. Instead, the castle was built to withstand winds of over 110 mph with a 600-ton steel frame and 10-inch concrete walls. It’s definitely not going anywhere during a hurricane.

After Hurricane Irma, we spoke to Lee Cockerell, former Executive Vice President of Disney World and resident of Central Florida. According to Mr. Cockerell, “We are very well prepared for these types of events. We run drills several times a year so everyone knows exactly what to do.”

The preparation for a hurricane begins in May when grounds crews focus on removing any branches or other items that could cause damage during a hurricane. Prior to storm arrival cast members know exactly what needs to be tied down or brought inside. The real magic happens during and right after the hurricane passes.

During a hurricane such as Irma, approximately 5,000 cast members stayed on property. In addition to hotel staff, cast members on stand by for clean-up spend the night in the parks. Cots are set up in the Magic Kingdom tunnels and other buildings around property, and board games and the like are on hand while cast members wait for the storm to pass. As soon as is safe, those cast members descend upon the parks to clean up and get set for the reopening the following day. If we haven’t said it recently, THANK YOU amazing cast members. Your commitment to excellence is inspiring and we love you.