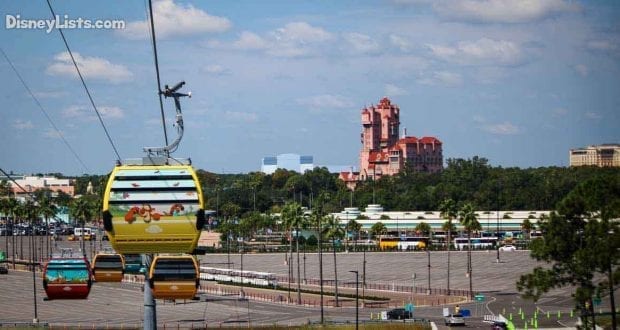 Disney Skyliner – Our Review & 15 Things You Need to Know

1 – Disney’s Latest Form of Transportation – A Most Magical Flight

The Disney Skyliner joins the network of complimentary Walt Disney World transportation options for resort hotel guests allowing them to travel effortlessly around Walt Disney World with a touch of Disney magic. The gondolas join other favorite options such as the world-famous Walt Disney World monorail system along with ferry boats and water taxis and one-of-a-kind motor coaches.

One thing that struck us as we rode was just how different this option is from the other forms of transportation available. Disney could have chosen to just add more buses to the fleet, but they were specifically looking to give guests a whole new way to experience the resort. We had a chance to speak with Dean Huspen, Principle Architect at Walt Disney Imagineering, and he expanded this idea about the Skyliner. Check out the video below.

This “most magical flight on Earth” connects Epcot and Disney’s Hollywood Studios to Disney’s Art of Animation Resort, Disney’s Pop Century Resort, Disney’s Caribbean Beach Resort and the new Disney’s Riviera Resort, a Disney Vacation Club resort that is now open. But the whole experience is so much more than just a way to get from point A to point B. The Disney Skyliner is an attraction on its own, one that is not only a whole lot of fun, but comfortable, and even peaceful.

There are five Skyliner stations and three Skyiner lines. Note that when traveling from point to point, you will be required to exit the gondola and then get in the queue again to keep going on your trip. You cannot, for safety reasons, just stay on. For instance, if you get on at Art of Animation, you’ll need to get off at Disney’s Caribbean Beach and then get in the queue for either the Disney’s Hollywood Studios line or the Epcot line. Disney’s Caribbean Beach is the central hub, and you can easily access all points from this station. There are well-marked signs to ensure that you are in the right queue, but if you’re not sure, simply ask a Cast Member to point you in the right direction. 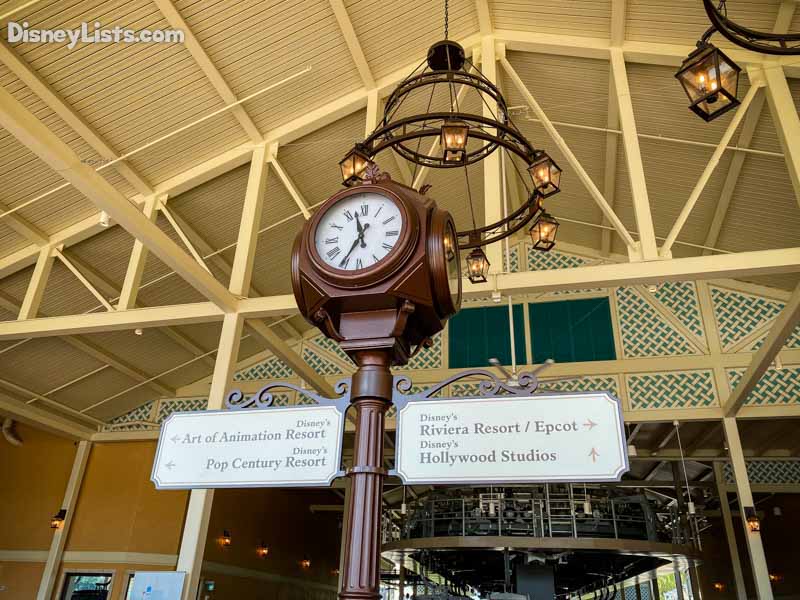 It shouldn’t be a surprise that the design of these stations are all unique and fit in perfectly with their locations. 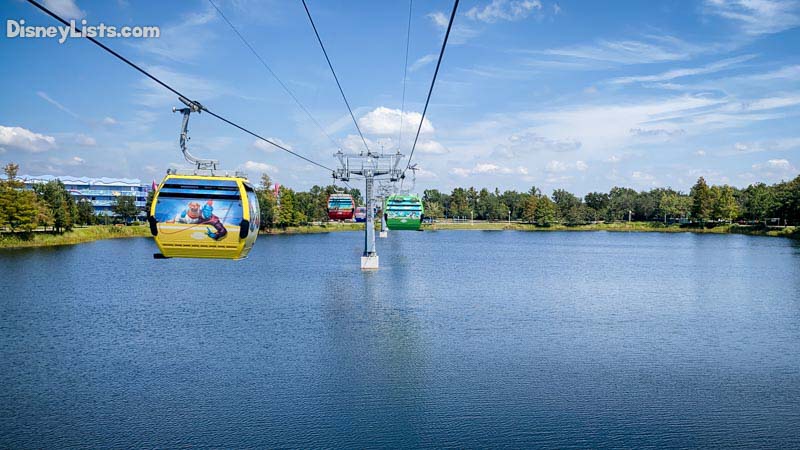 As you might expect, the outside of the gondolas have been designed with a bit of Disney magic. Nearly half of the approximately 300 Disney Skyliner cabins are wrapped in whimsical Disney scenes – with beloved characters, fan-favorite movies, attractions and more – giving the appearance that Disney pals are riding along with guests. The other cabins are one of eight vibrant colors and feature sleek curved lines. Keep in mind that wrapped gondolas are harder to see out of because of the wraps; however, you can see clearly out of the doors. You might not get a choice of which kind of gondola you ride in, but at least you’ll know what to expect as far as your view goes. 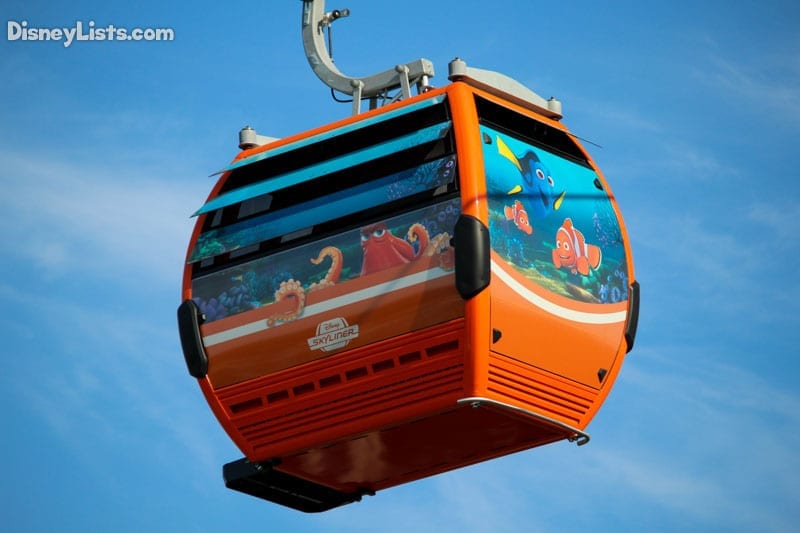 4 – Inside the Gondolas – Temperature

Let’s talk about the inside of the gondolas. One bit of information that was released ahead of time that shocked most people was the fact that there is no air conditioning inside the cabins. Knowing the hot Florida sun will be beating down on these gondolas most of the year, the number one question we received ahead of time, and what everyone wants to know, is how hot it is inside. I was pleasantly surprised at just how comfortable our rides were. During one ride experience, it was 12 noon, and the temperature was a very warm 90 degrees with bright sun the usual high humidity that we experience in Central Florida. We couldn’t tell inside. What makes all the difference is the fact that there are vented openings which give strong breezes inside the gondola (see photo below). Many in our party had their hair noticeably being blown about. When compared to the other forms of transportation, this ride isn’t any worse when considering the temperature. For instance, the air-conditioned monorail is usually very warm because the doors are open so much and when it’s crowded it can be very stuffy inside. The Disney Skyliner experience was so much more comfortable than those warm rides on the monorail! While many were concerned about the temperatures in the gondolas, we’re happy to report that guests need not be concerned! 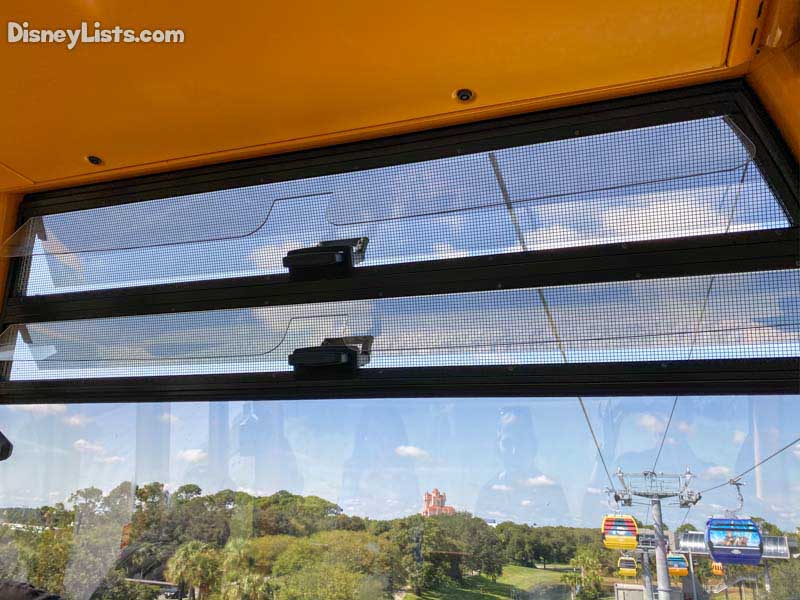 5 – Inside the Gondolas – Roominess

The other aspect that makes the ride inside the gondola so comfortable is it’s not crowded. The gondolas fit up to 10 people. While we never had more than six adults in our cabins, there was plenty of room for more. There are benches on both sides of the gondola, and you must remain seated during your flight. This ensures that you’ll be able to sit back, relax, and enjoy the ride. You won’t be crammed in like the bus or monorail. It makes for a really lovely ride experience.

Note that wheelchairs, ECVs, and strollers are allowed inside. Children do NOT need to get out of their strollers to ride unless the stroller is too wide to fit through the door. The space between the benches is not as wide as some double strollers may be, so parents, be prepared to break down your stroller if needed.

There is also a separate line for guests needing additional time to board. These cabins are set apart so that guests with wheelchairs or strollers can board safely without the gondola moving. It also means that the other gondolas will not be starting and stopping repeatedly. Disney Cast members will operate the system to allow these gondolas to easily re-join the mainline. It’s a fantastic system that was very well thought out. 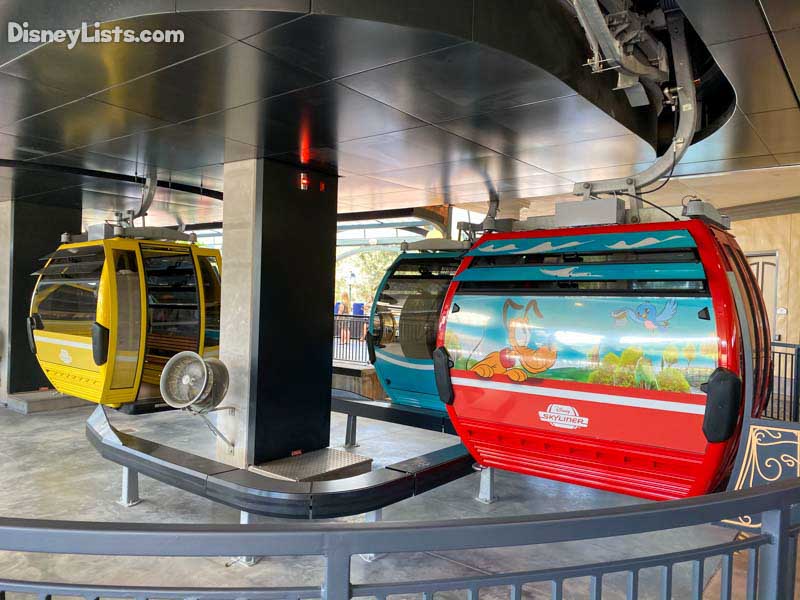 The gondolas for wheelchairs, ECVs, and strollers are set apart for easy boarding.

The Disney Skyliner soars above waterways and wooded areas alike on its way to theme parks and Disney resort hotels, and guests are treated to views never before seen. On the Disney Skyliner, guests will discover bird’s-eye views of Disney’s Hollywood Studios, including the Hollywood Tower Hotel. Approaches to Epcot are equally eye-catching, as the countries around World Showcase Lagoon come into view with iconic Spaceship Earth in the distance. You’ll also be treated to great views of the France Pavilion and get a good look at the construction progress for Remy’s Ratatouille Adventure, which is set to open next year.

Click here to watch a video of some views from the Disney Skyliner!

The other aspect of the ride experience that was surprising to me was just how peaceful the ride was. While riding up in the sky, it’s so quiet and tranquil. You get a chance to sit and relax and take in the beautiful views. We expect that the Disney Skyliner will be a very popular way to travel around the Walt Disney World Resort.

What’s also amazing about the Disney Skyliner is how fast it is. From the Art of Animation/Pop Century station to Disney’s Caribbean Beach station is a short three-minute ride. From Caribbean Beach to Hollywood Studios is also a few short minutes. From Caribbean Beach to Epcot is under ten minutes. You don’t have to worry about traffic, stop lights, etc. slowing the trip down. We previously mentioned that gondolas are pulled off the mainline for boarding wheelchairs and strollers, so stops while traveling should be minimal, however, it is normal that the Skyliner will stop now and again. Disney has signs posted to let guests know that the Skyliner will stop here and there. The good news is the stops are usually short and it is not too bad.

In addition to convenient theme park access, guests staying at Disney resort hotels accessible by Disney Skyliner will have quick-and-easy transportation to a world of other dining and entertainment options. These include all the fun of Disney’s Boardwalk entertainment district, access to Epcot through the International Gateway station, and restaurants and recreation found at the resort hotels serviced by Disney Skyliner.

This is a huge benefit that shouldn’t be overlooked. Before the Disney Skyliner, it was challenging to travel from resort to resort. You had to travel to a park or Disney Springs and then transfer to a bus for the resort. You could get a taxi, Uber, or Minnie Van, but those are not free. The Disney Skyliner changes all that. Want an evening at Disney’s Boardwalk? Then simply travel to Epcot on the Skyliner and walk over. This also works for character dining at Cape May Café at Disney’s Beach Club Resort or seeing the Gingerbread display at Disney’s Yacht Club Resort. Want to try that latest Disney cupcake at Art of Animation? Just hop on the Skyliner and make a visit. Disney’s Riviera Resort also has a station and offers the best character breakfast and signature dining with amazing views at Topolino’s Terrace. We recently stayed at Riviera Resort and it was so nice to just hop on the Skyliner at night to go see Epcot Forever at Epcot. 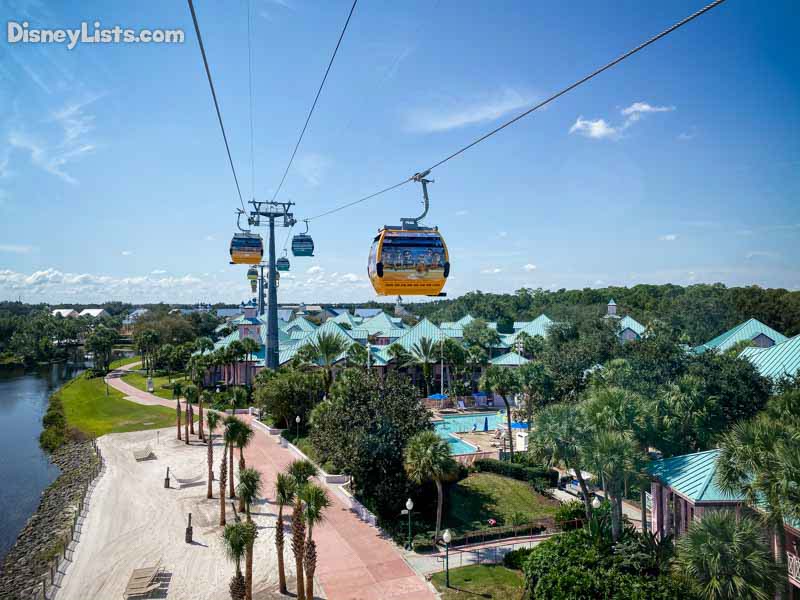 11 – Disney’s Caribbean Beach – The Place to Be

We think it’s worth mentioning that if you’re not sure where to stay at your next Walt Disney World vacation, you’ll want to seriously consider Disney’s Caribbean Beach Resort. Not only is it a fantastic moderate resort, but as the hub of the Disney Skyliner, you’ll be in a terrific location to easily access Disney’s Hollywood Studios and Epcot. Need a little bit more sleep in the morning? Want to head back to the room for an afternoon nap or a swim without it taking up too much time? When the time to travel is under five minutes to Disney’s Hollywood Studios, it makes that option so much easier and practical to do. Also, dropping into Epcot for an evening at World Showcase is also that much easier.

Disney has a released a line of Disney Skyliner merchandise that is a whole lot of fun and inspired by the Skyliner itself. The collection offers something for every member of the family, including t-shirts, hoodies, mugs, pins, MagicBands, Christmas ornaments, toys and more, while Disney annual passholders and DVC members have some amazing options just for them.

Merchandise is available at these locations:

Joffrey’s Coffee & Tea Co.®, the official specialty coffee of Walt Disney World Resort, Disneyland Resort and Disney Vacation Club, welcomes guests with a quick-service location adjacent to the station at Disney’s Caribbean Beach Resort. The menu of coffees, pastries and specialty items will include the new “Toffee Flight Latte” found initially only at the station. The latte blends sea salt caramel toffee and dark chocolate, topped with toffee and chocolate crumbles and a cloud of whipped cream. 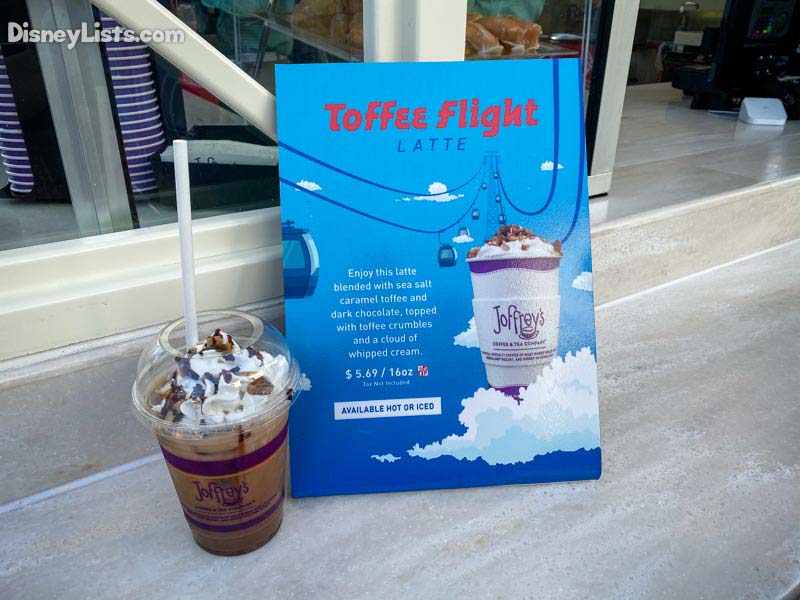 We can’t say enough about the Disney Skyliner. Our expectations were high, and Disney exceeded them. The ride experience is comfortable, relaxing, and offers a really unique way to see and experience Walt Disney World. We really think Disney has hit a home-run with the Disney Skyliner and has brought guests a fun, efficient, and magical way to travel throughout the resort! Next time you’re visiting, be sure to take a ride on the Disney Skyliner!