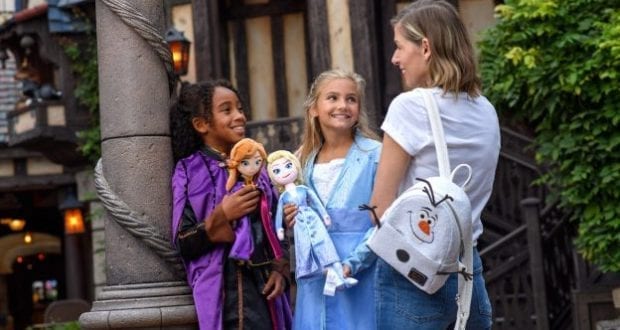 Calling all Frozen fans! In anticipation of the release of ‘Frozen 2’ next month, Disney Parks has released a brand-new merchandise collection that will be sure to tempt you. Catch all the details below!

Here are all the details from Disney cast member Anthony Armenia:

In celebration of #FrozenFanFest, we are elated to share that new merchandise inspired by “Frozen 2,” the highly anticipated animated feature from Walt Disney Animation Studios, is available now at Walt Disney World Resort in Florida, Disneyland Resort in California and online at shopDisney.com!

From apparel and costumes to accessories, Disney Parks have a wide assortment of merchandise inspired by Anna, Elsa, Olaf and more, including new characters from “Frozen 2” to gear up for the big screen debut on Nov. 22, 2019.

Check just some of our “Frozen 2” favorites for you and your little ones: 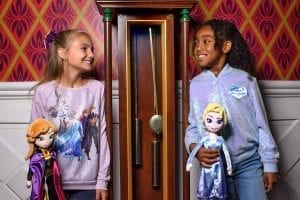 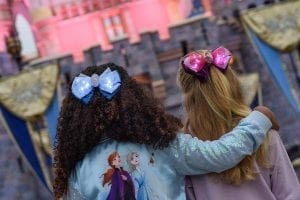 All four of these products are available now at Walt Disney World Resort and Disneyland Resort with both bows and the sequined sweater available now and bomber jacket coming later this fall to shopDisney.com! 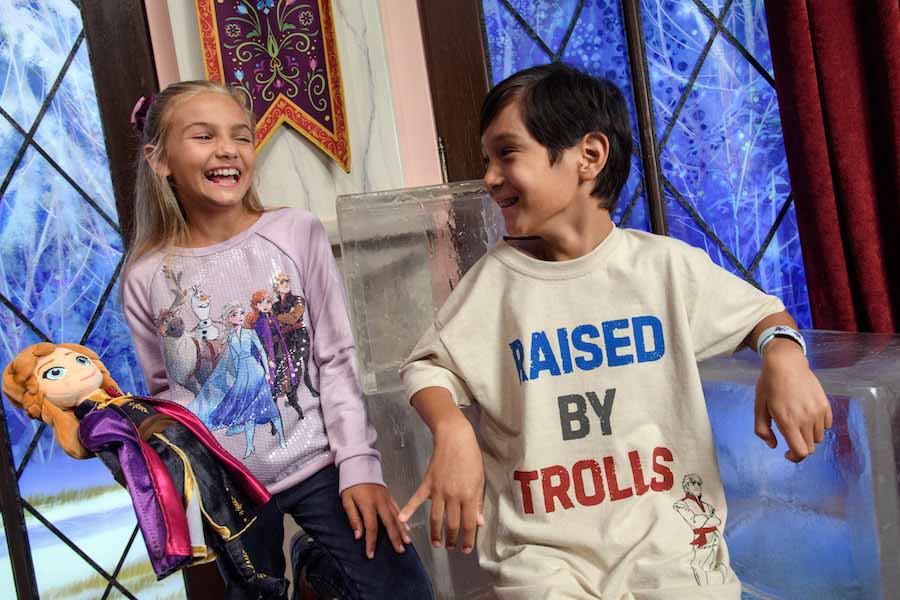 Kristoff fans can embrace the magic of the trolls with this shirt featuring none other than Kristoff himself, available exclusively at Walt Disney World Resort and Disneyland Resort. 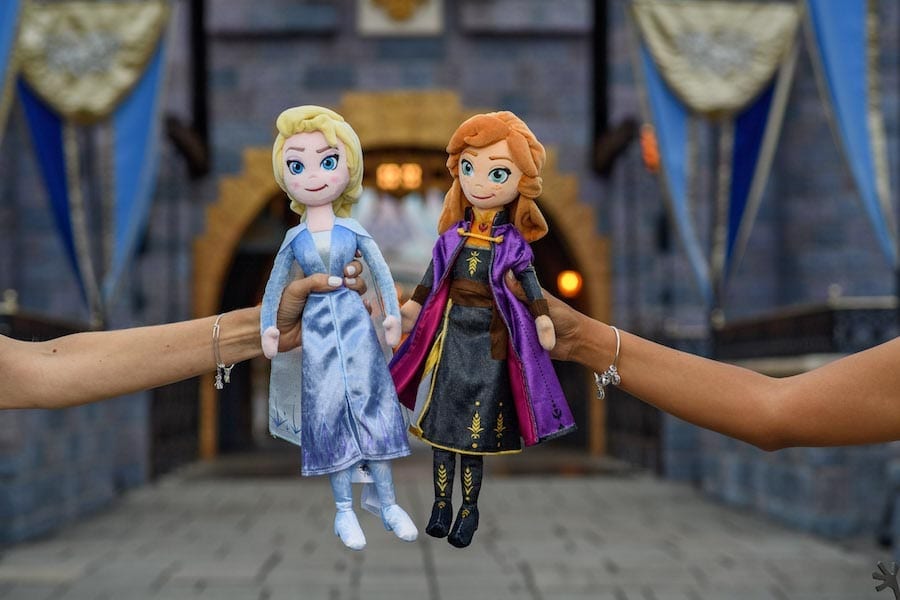 Anna and Elsa plush dolls are also available at Walt Disney World Resort, Disneyland Resort and online at shopDisney.com! And if you look closely at the right hand pictured above, you’ll see an assortment of “Frozen 2”-inspired Pandora charms coming on Oct. 10th that we revealed earlier this week! 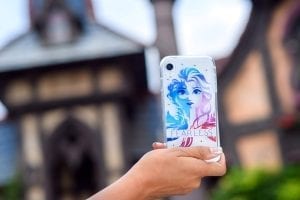 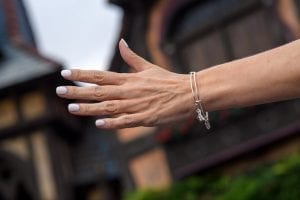 Deck out your phone case and show your fearless side with this brand-new iPhone case available at Walt Disney World Resort, Disneyland Resort and online at shopDisney.com!

Those looking for a little Olaf flair won’t want to miss this Alex and Ani charm bracelet featuring the huggable snowman himself! This bracelet is also available now at Walt Disney World Resort and Disneyland Resort and coming later this fall to shopDisney.com! 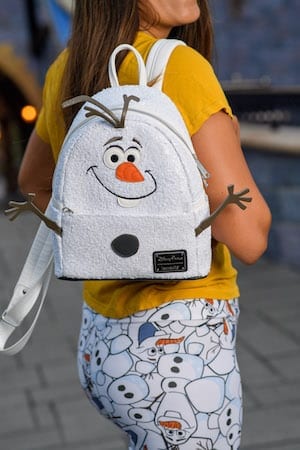 Everyone’s favorite snowman is back and better than ever with a sequined Olaf Loungefly backpack and Olaf print leggings to go with it! 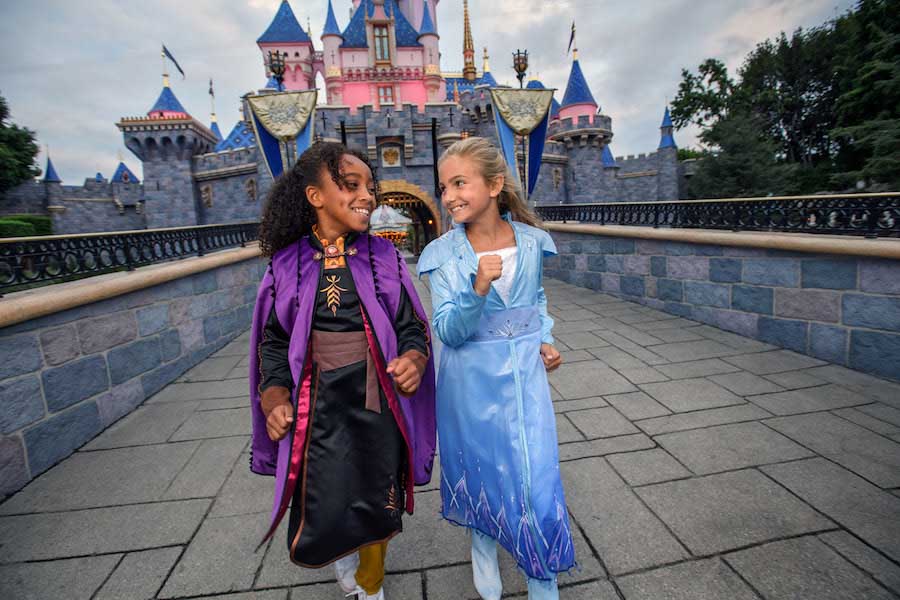 Just in time for Halloween, new costumes based off Anna and Elsa’s new outfits from “Frozen 2” are available at Walt Disney World Resort, Disneyland Resort and online at shopDisney.com, as well as in Disney Stores nationwide!

For those of you located in Southern California, you’ll find these products and more at World of Disney in the Downtown Disney District, Disney Showcase at Disneyland park and Off the Page at Disney California Adventure park! Located in Central Florida? You can find a flurry of products at World of Disney in Disney Springs, The Wandering Reindeer at Epcot, Sir Mickey’s at Magic Kingdom Park and Frozen Fractal Gifts at Disney’s Hollywood Studios and Island Mercantile at Disney’s Animal Kingdom.

Keep your eyes peeled over the next few months as even more products roll out from “Frozen 2” including a MagicBand, pins and even more apparel!

Don’t forget to use #FrozenFanFest and showcase your “Frozen 2” style with us ahead of the film’s debut on Nov. 22, 2019!

The Frozen Ever After attraction is open to guests at the World Showcase in Epcot.  The closure of Maelstrom sparked very strong opinions and reactions on social media, but after riding the new, upgraded attraction, I definitely feel like there is a new life to the attraction that is good for the area.  Here are some great things to know about the attraction, but be warned that there are spoilers ahead:

We all love the music and the amazing voice talent that brought Frozen to life for us on the big screen.  Well the great news is that the same cast returned to record all of the music and voices that is used on the attraction.  There are even areas with a few updated lyrics that had to be recorded for the attraction. Be sure to read all of the signs, wall art, etc.  It explains the theme for the attraction and the wonderful story of the two sisters.  You will find Oaken’s Trading Post as part of the ride queue and you get to walk through it, and see various trinkets from his shop.  One of my favorites was a sign when you first enter the queue that says, “Official Ice Master & Deliverer of Arendelle”.  (It definitely IS a thing!) There is absolutely zero change, other than the load/unload areas that we mentioned.  The ride track is the exact same ride with the same slightly backwards drop as well as the forward drop.  If you remember Maelstrom, you can still visualize where everything was.  (Although, you really won’t want to since the attraction is really well done, and has amazing technology!)  If you really can’t get over losing Maelstrom, at least you know that you can still close your eyes and experience it again as far as the actual ride goes! This attraction usually has anywhere from a 45 minute up to a 2 hour wait time.  I highly recommend that you grab a FastPass+ selection for this attraction as soon as you possibly can.  If you can’t get one, then try to get there first thing in the morning and head right for it to help minimize the long waits in line.  You can also try to catch it on Extra Magic Hours.  If none of these work out, you may want to grab a beer (or soda) and plan to enjoy a wait!

🦁 Amazing news! The Festival of the Lion King i