The Play Disney Parks app is a mobile app that connects family and friends to the theme parks with unique experiences and activities that bring surrounding environments to life. The app debuted last year and offers interactive adventures and experiences that bring surrounding environments to life at Disneyland Resort and Walt Disney World Resort. With the opening of Star Wars: Rise of the Resistance, there are now new jobs (games) at the attraction that will unlock when you visit. Catch all the details below.

Here are all the details from Disney cast member Thomas Smith:

If you’ve traveled to Star Wars: Galaxy’s Edge, you may be familiar with the Star Wars: Datapad, a land-wide interactive experience available through the Play Disney Parks mobile app. There are so many ways to explore with your Datapad – and today, we’re excited to share details on two new jobs at Star Wars: Rise of the Resistance!

[Now open] at Disney’s Hollywood Studios in Florida and January 17, 2020, at Disneyland park in California, Star Wars: Rise of the Resistance will take visitors on a harrowing adventure and put you in the middle of a climactic battle between the First Order and the Resistance. With your Star Wars: Datapad, you can choose to support either side by selecting new jobs within the app as you move through the Resistance clearing and towards attraction.

Distress Signal Received: If you choose to help the Resistance you’ll receive a distress signal from Finn, who is undercover on a Star Destroyer near Batuu. Connect and help him navigate the ship by selecting his path – and you may even free Resistance prisoners, reprogram droids and gather information on what the First Order is up to on the way. Depending on the route you share with Finn, you’ll uncover items and schematics exclusive to this assignment. 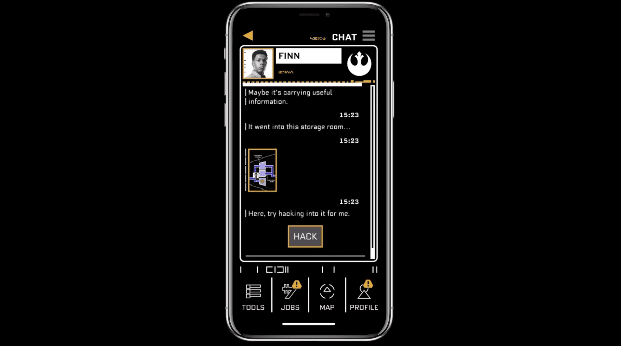 Infiltrate Resistance Recruitment: Meanwhile, First Order loyalists entering the Resistance recruit line will be tasked with surveilling and reporting back on the status of Resistance supplies. You will be able to communicate with a First Order officer as you make your way through, and with her instruction, you may choose to scan crates, intercept transmissions or even plant tracking devices from your Datapad. 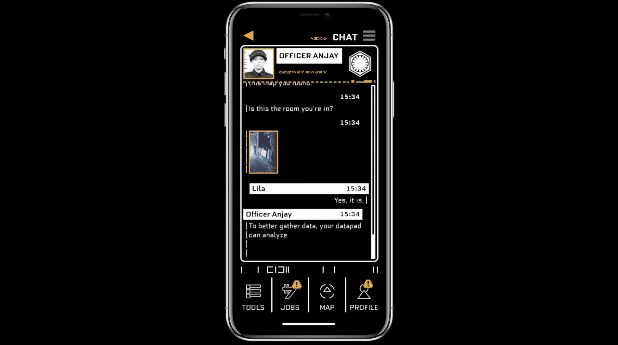 Look for the new Star Destroyer icon in your Datapad to take on these new jobs. Will you support the Resistance? Or help the First Order?

And while exploring the surrounding area and Black Spire Outpost, use your “scanning” tool to discover new items that you can collect or trade with fellow galactic travelers, and don’t forget to use your “hacking,” “tuning” and “translation” tools to explore the land. Perhaps you’ll learn something new from a local droid, intercept some local chatter or learn a galactic language! And for visitors looking to take part in more, help Hondo Ohnaka sort cargo during an in-queue game at Millennium Falcon: Smugglers Run, or join in “Outpost Control” to show where your loyalties lie. Of course…you could always breakout on your own as a scoundrel.

You’ll just have to see where your Star Wars: Galaxy’s Edge adventure takes you!

Star Wars: Galaxy’s Edge is the first land within a Disney park specifically designed to integrate with the Play Disney Parks mobile app. When guests choose to use the Play Disney Parks app in Star Wars: Galaxy’s Edge, they will be able to transform it into their very own Star Wars: Datapad. We saw a demonstration of the app in action, and we can’t wait to try it out for ourselves. Learn more about this amazing technology below.

The Play Disney Parks app is a mobile app that connects family and friends to the theme parks with unique experiences and activities that bring surrounding environments to life. The app debuted last year and offers interactive adventures and experiences that bring surrounding environments to life at Disneyland Resort and Walt Disney World Resort. Many guests have enjoyed the app throughout the parks. Using the app in Star Wars: Galaxy’s Edge provides new opportunities for guests to engage with the land, such as translating a galactic language or learning what’s hidden inside crates and containers.

In the land, guests will be able to transform the Play Disney Parks app into their very own Star Wars: Datapad on their mobile devices. As guests earn galactic credits for things they do in the land using their Datapad, the credits will show in their Datapad profile. 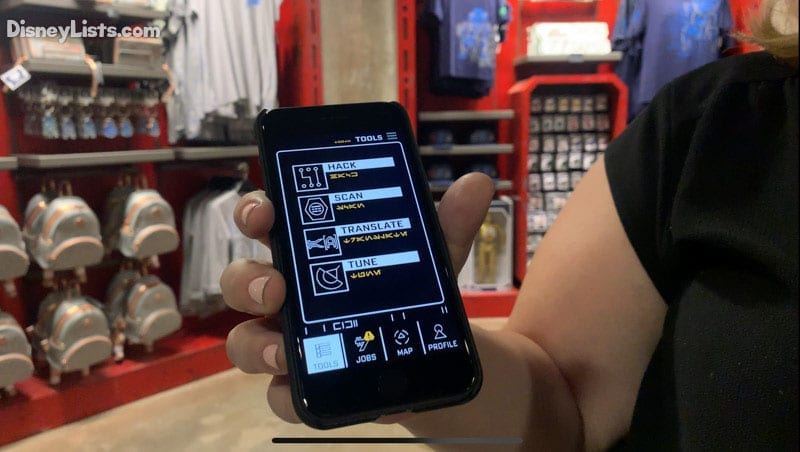 Guests can use the Play Disney Parks app to interact with elements in Star Wars: Galaxy’s Edge. The app will provide four primary functions to unlock a deeper level of storytelling within the land:

Throughout the day, guests may participate in a multiplayer game throughout the land, “Outpost Control,” to support either the Resistance or the First Order.

5 – Other Interactions with Black Spire Outpost

While waiting to board Millennium Falcon: Smugglers Run, guests will find an in-queue game. Scott Trowbridge, Portfolio Creative Executive for Walt Disney Imagineering explains that “while getting ready to board the most famous ship in the galaxy, you can even take on a job for Hondo Ohnaka, the pirate turned “legitimate” businessman operating Ohnaka Transport Solutions out of Black Spire Outpost. Reroute misplaced cargo, learn how to keep your cover under pressure and prep the Falcon for your flight in this in-queue game!”

Finally, certain functions performed with the app may trigger physical effects within the land.

Disney Cast Member Rachel gave us a demonstration of the app in Star Wars: Galaxy’s Edge. Check out the video below to see the app in action.