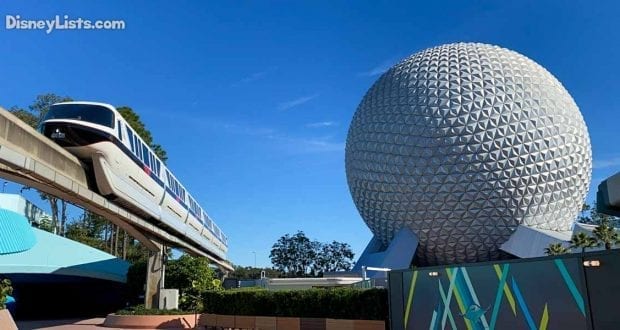 NEWS: 3 New Films & More Debut at Epcot as Part of the Transformation of Epcot

As part of the ongoing transformation of Epcot at Walt Disney World Resort, three new films, a new gallery, debuted on January 17, 2020, the same day the 2020 Epcot International Festival of the Arts kicked off. These new offerings provide more ways for guests to experience Disney magic and celebrate the world around them during a day at Epcot. We were there to check out all of the new offerings. Catch all the details below.

The Land pavilion explores the spectacular beauty, diversity, and dynamic story of Earth. In collaboration with the Disney Conservation Fund, the 10-minute film uses in-theater effects (including wind, scents, and water) to tell the story of life on this planet and why it’s vitally important to care for it. “Awesome Planet” features narration by Ty Burrell, star of ABC’s “Modern Family,” and an original musical score from Academy Award-winning® composer Steven Price.

The new film was great. Ty Burrell, the narrator, is a realtor, who is selling you “Planet Earth.” It starts with a short sequence of how the earth was formed, and then we get to tour the different “homes” or biomes that Earth has to offer. You’ll see the desert, the frozen poles, grasslands, and woodlands. The narrator then discusses how Earth has a lifetime maintenance plan as the biomes work together for our benefit. Time is spent on how our biomes are in a period of change and extremes — some challenges facing our planet are highlighted with dramatic music and lightening. The sequence doesn’t last too long, and the film then describes how we have hope because we can work together to find solutions.

Overall, I really enjoyed the film. The imagery is beautiful, and the images crisp and clear. It felt like I was watching a Disney Nature movie. Like Soarin’, you’ll experience smells and even feel misty rain. I felt the environmental warning at the end of the film was done well—it was not over the top or pushy. This film is an excellent addition to The Land pavilion and worth a visit. 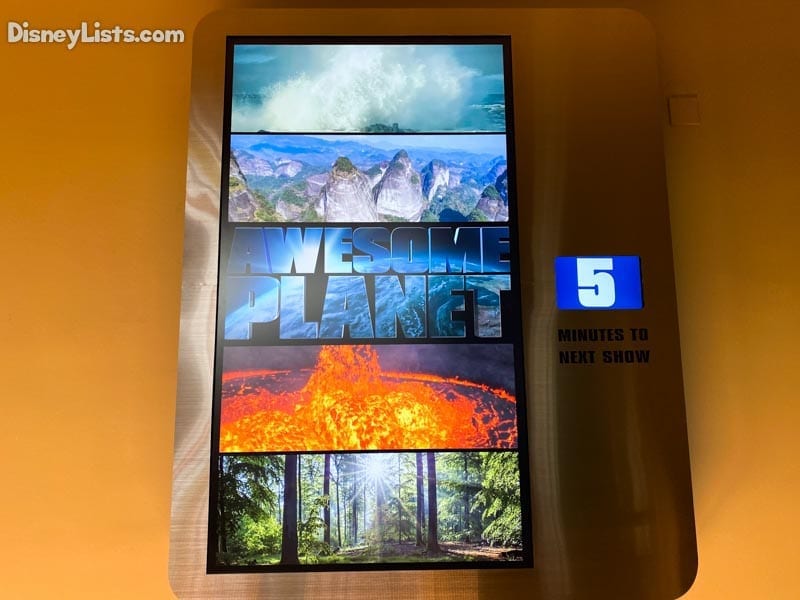 Over in the Canada pavilion, there is an update to the previous “O Canada!” film with new scenes, a new musical score by Canadian composer Andrew Lockington and new narration by award-winning actors Catherine O’Hara and Eugene Levy.

The thirteen-minute film features footage from a new digital 360 Circle-Vision camera that Disney Imagineers built for the project. The new film tells a broader story of Canada and highlights the five regions of Canada: Atlantic Provinces, Central Canada, Prairie Provinces, West Coast, and North. You’ll still see familiar scenes from “O Canada,” yet the film’s new digital scenes steal the show. There is some humor in the narration, but it has been toned down from Martin Short’s version. I learned some new facts about Canada (it has a desert!), and the imagery is beautiful. Every time I watch the movie in Canada, it makes me want to visit! The update is a fantastic one that shows off the country and its people. You’ll have a greater appreciation for Canada after viewing it. 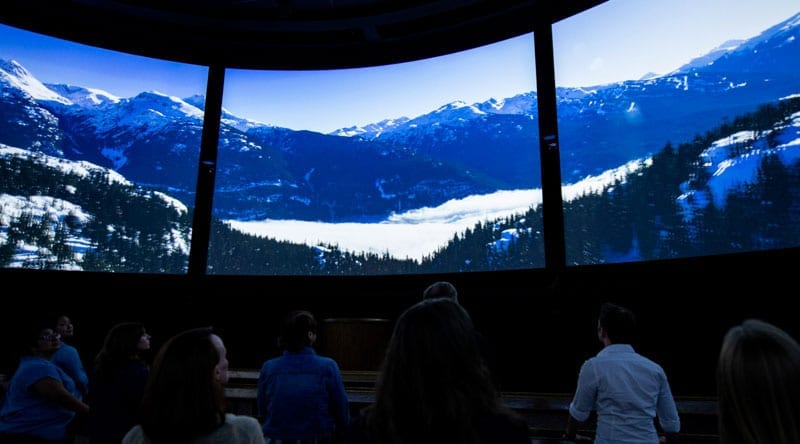 “Canada Far and Wide in Circle-Vision 360” The new film celebrates Canada with picturesque scenes from across the country, displayed in 360 degrees. Credit: Disney

3 – “Beauty and the Beast Sing-Along”

Finally, over in the France pavilion’s Palais du Cinémais, there’s a brand new “Beauty and the Beast Sing-Along.” The film was directed and produced by Don Hahn, producer of the animated and live-action “Beauty and the Beast” films. The film invites guests to participate in a twist on a tale as old as time. It also features narration from Angela Lansbury, who played Mrs. Potts in the original film. The new sing-along will run in rotation with “Impressions de France,” which received an upgrade to 4K projection. 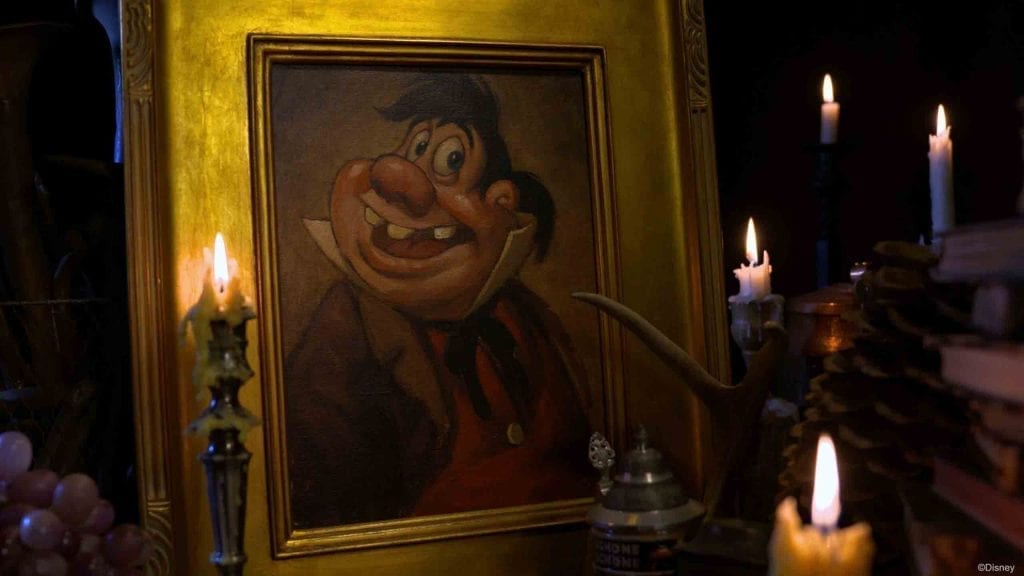 LeFou plays a key role in the new “Beauty and the Beast Sing-Along,” a new film in the France pavilion. The family-friendly experience is a twist on a tale as old as time. Credit: Disney

The new film is sixteen minutes and has five songs that Don Hahn described as “Cliff-Note” versions. They were able to use the voice tracks from the original movie. They brought back original voice actors for new parts, including Angela Lansbury reprising her role as Mrs. Potts. Hahn also shared that some of the original animators were also brought back to work on the new scenes. It was absolutely fantastic to see this classic film on the big screen again. In fact, Hahn shared that since the film debuted in 1992, many guests have never seen Beauty and the Beast on the big screen. They were thrilled to bring this film to guests in this new and exciting way.

I don’t want to spoil this new twisted version for you. I will say that when I saw it, the people in the theater were singing along and laughing. We all left smiling. The new story is a whole lot of fun. You’ll definitely want to stop by the France pavilion and check out the new film. Check your Times Guide for information on when you can catch the new show.

4 – “Tales as Old as Time: French Storytelling on Stage and Screen” Gallery

Along with the sing-along is a new exhibit inside Palais du Cinéma. “Tales as Old as Time: French Storytelling on Stage and Screen” invites guests to explore six distinct gallery cases featuring a collection of costumes, music, artwork, and more, all dedicated to the adaptation of French literature in cinema, theater, ballet, and opera. The exhibit reinforces how French literature has inspired artists from around the globe, including those who created timeless Disney classics such as “Sleeping Beauty,” “Cinderella,” and, of course, “Beauty and the Beast.” Items on display from the Walt Disney Archives include a glass slipper from the live-action “Cinderella” film and Belle’s costume from the live-action “Beauty and the Beast.” Community arts organizations from Florida also contributed pieces to the exhibit. When planning to see “Beauty and the Beast Sing-Along,” be sure to give yourself a few extra minutes to look around at the items in the gallery. The displays are very interesting and well worth a visit! 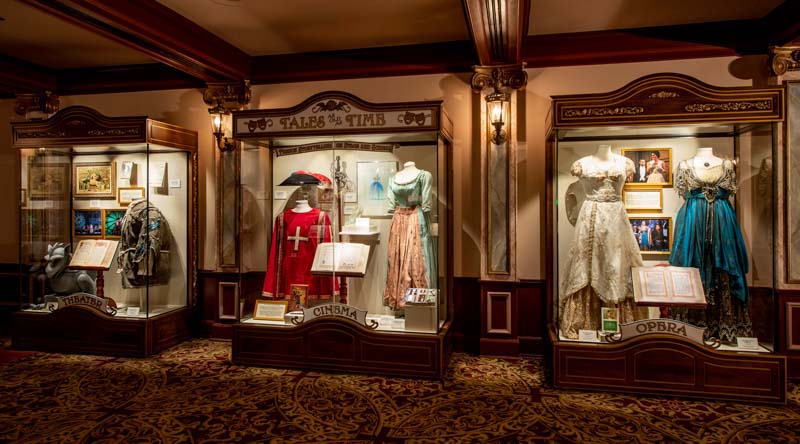 “Tales as Old as Time: French Storytelling on Stage and Screen.” The all-new exhibit gives guests the opportunity to explore six gallery cases featuring a collection of costumes, music, artwork and more, all dedicated to the adaptation of French literature in cinema, theater, ballet, and opera. Credit: Disney/David Roark

5 – Epcot International Festival of the Arts

The Epcot International Festival of the Arts also kicked off on January 17, 2000. The annual global celebration of visual, culinary, and performing arts continues for 39 days through February 24, 2020. The event features visiting artists, an array of foodie delights, and opportunities for guests to embrace their own inner artists. We’ve got a complete guide to the festival! Click here for the 15 things you don’t want to miss at the 2020 Epcot Festival of the Arts.

It's Opening Day of the 2021 Taste of EPCOT Intern