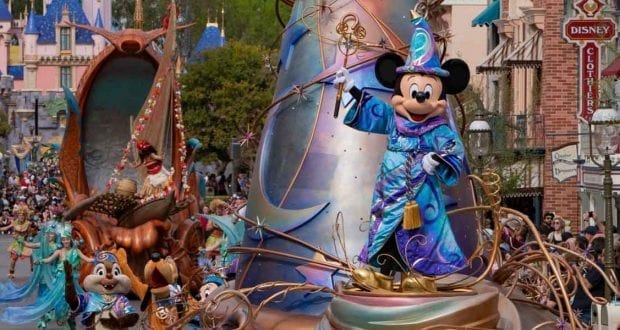 Disneyland debuted its all-new “Magic Happens” parade at Disneyland Park on February 28, 2020. The incredible “Magic Happens” daytime spectacular celebrates the awe-inspiring moments of magic that are at the heart of so many Disney stories. This new parade, led by Mickey Mouse and his pals, celebrates moments of magic from Walt Disney Animation Studios and Pixar Animation Studios films as they are brought to life on a grand scale with stunning floats, artistic costumes and a surprising and energetic musical score combined with beloved Disney tunes. Catch all the details of this new parade below.

“When you come to Disneyland and Disney California Adventure, there are so many ways to immerse yourself in our stories, but a parade is a unique experience because it’s the only way for you, as the audience, to stay in one place and have so many stories, characters and magical moments pass right in front of you,” said David Duffy, creative director for Disney Live Entertainment. “We’ve designed the ‘Magic Happens’ floats so that characters, scenes and surprises are revealed a little at a time, making each float a journey of discovery.”

“Magic Happens” includes something for everyone and will be enjoyed by guests of all ages. This new parade features nine newly designed floats, highlighting magic from classic Walt Disney Animation Studios tales such as “The Sword in the Stone,” “Cinderella” and “Sleeping Beauty,” to more recent stories including “Frozen 2,” “Moana” and “The Princess and the Frog,” as well as Disney and Pixar’s “Coco.” The new floats were created as pieces of moving art, with their lines and aesthetic design working to tell a story along the parade route, while also evoking a sense of magic. 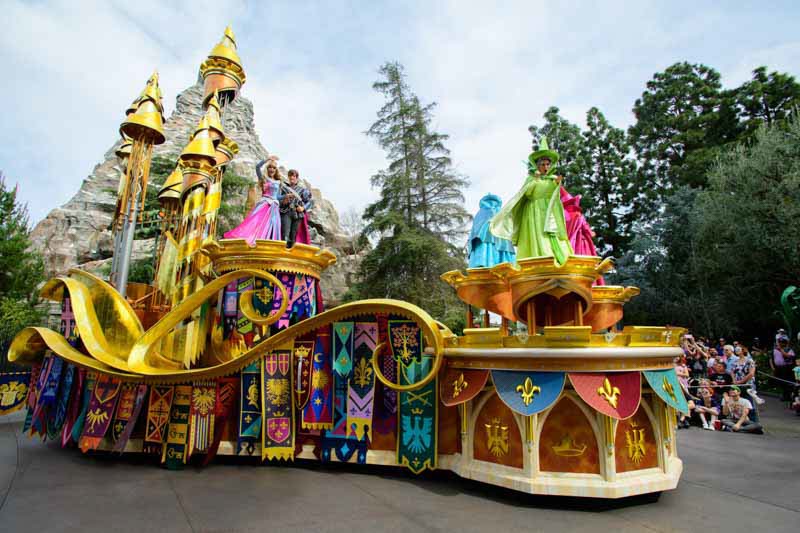 “Magic Happens” parade at Disneyland Park celebrates the awe-inspiring moments of magic that are at the heart of so many Disney stories. This new daytime spectacular features stunning floats, beautiful costumes and beloved Disney characters. (Todd Wawrychuk/Disneyland Resort)

“This parade celebrates the way magic affects both the characters in the stories and the guests who are watching,” says Jordan Peterson, show director for Disney Live Entertainment. “‘Magic Happens’ is like a love letter to those special transformative moments.”

In addition to the stunning floats, the parade route along Main Street, U.S.A., is filled with dynamic performers and more than two dozen Disney and Pixar characters. The parade’s costume design draws inspiration directly from modern runways, making each costume look fashion-forward, yet uniquely Disney. Many performers and characters in “Magic Happens” don all-new costumes, specifically made for this parade. 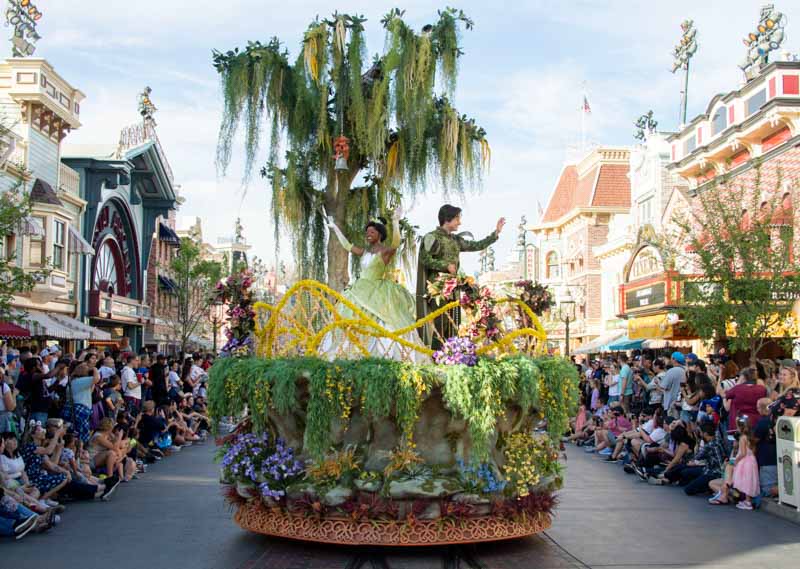 Tiana and Naveen from “The Princess and the Frog” are seen amidst a swirl of golden flowers where they share a kiss, completing their transformation back into human forms. This daytime spectacular features stunning floats, beautiful costumes and beloved Disney characters. (Richard Harbaugh/Disneyland Resort)

While the music and stories seen in “Magic Happens” are rooted in iconic Disney lore, the soundtrack and choreography are heavily influenced by today’s pop culture designers, putting a contemporary spin on the classic Disney hits. “Magic Happens” features an energetic musical score and new songs, co-composed by singer-songwriter, Todrick Hall.

“This is a full circle moment for me,” said Hall, who began his career at Walt Disney World Resort in Florida as a performer in “Beauty and the Beast – Live on Stage.” “I learned how to dance from watching Disney parades, so the fact that I am getting to create the music that these iconic Disney characters are going to be performing to is pretty much the most epic thing that has happened to me in my life!”

“Magic Happens” is a whimsical and joyous procession that allows the Disney magic to shine through. The parade features distinct stories with a mix of characters, making it feel contemporary and classic, fun and regal, and surprising and familiar – all at the same time. Highlights of the all-new “Magic Happens” parade include: 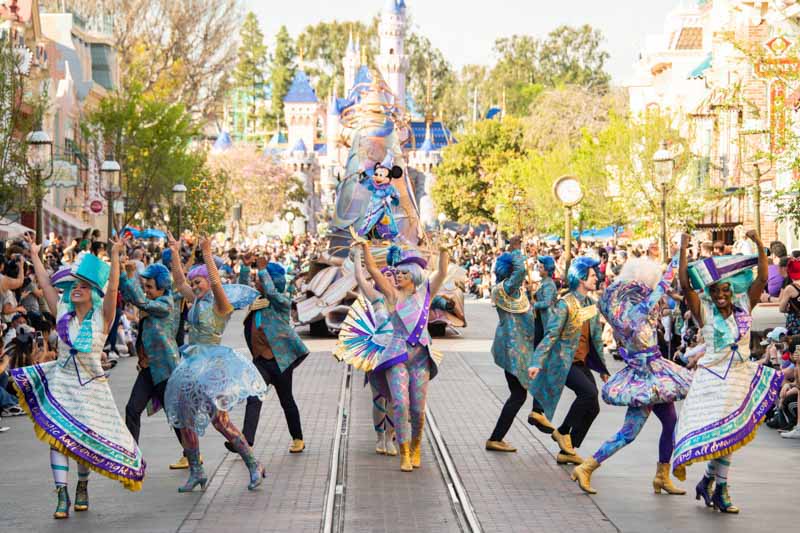 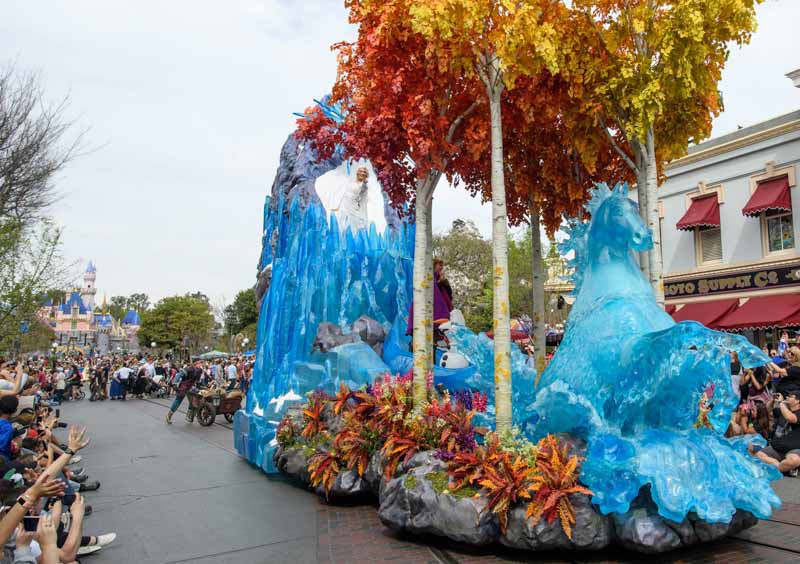 From Walt Disney Animation Studios’ “Frozen 2,” Anna and Elsa explore the mysteries of the Enchanted Forest protected by the Nokk, the mystical water spirit, as their friends Kristoff, Sven and Olaf tag along.(Richard Harbaugh/Disneyland Resort)

Virtual Viewing of the Parade!

During the shutdown because of Covid-19 Disney released a virtual viewing of the parade! Watch the video below!