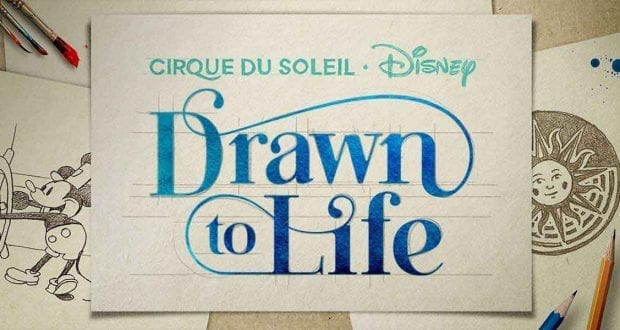 We were recently able to get a sneak peek at two acrobatic acts and the set of Drawn to Life, the highly anticipated, new family-friendly show coming to Disney Springs in Walt Disney World. Written and directed by Michel Laprise and with Fabrice Becker as Director of Creation, this collaboration between Cirque du Soleil, Walt Disney Animation Studios and Walt Disney Imagineering will premiere in 2021. Learn more about this new show below.

While Cirque du Soleil is not new to Disney Springs, the previous show, La Nouba, was missing one critical element – Disney. The new show, Drawn to Life, brings the best of Cirque’s creativity together with Walt Disney Animation Studios and Walt Disney Imagineering, and the result is a show that is perfect for guests visiting Walt Disney World.

“Interpreting the works from Disney’s spectacular catalogue of animation into a live show was a thrilling opportunity for Cirque du Soleil, and we couldn’t be more proud of this production,” explained Diane Quinn, Chief Creative Officer Cirque du Soleil Entertainment Group. “Together with Walt Disney Animation Studios and Walt Disney Imagineering, we have created a stunning show that will inspire audiences to dream and reach for the impossible.”

“Together Disney and Cirque du Soleil have created an incredible new family entertainment experience that is sure to awe audiences and touch the hearts of adults and children alike,” says Natalie Woodward, Vice President of Production for Disney Parks Live Entertainment. “Our two organizations are rooted in artistry and share a passion for creating memorable experiences. That’s one reason Drawn to Life is a show that could only come from the creative minds of Disney and Cirque du Soleil. 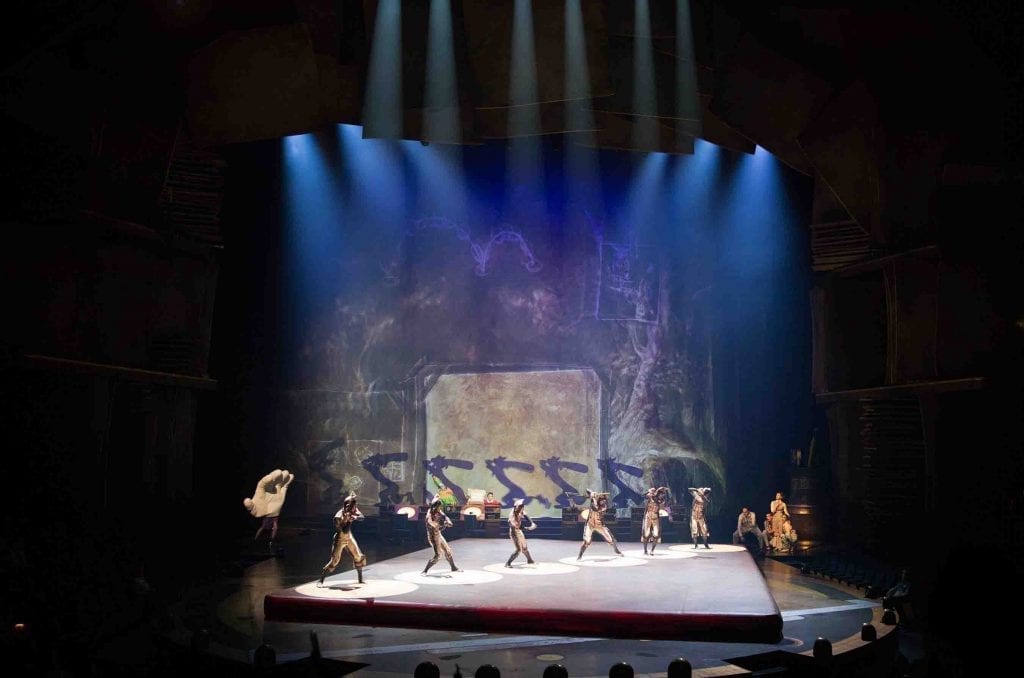 One of two acrobatic acts and the set of Drawn to Life, the highly anticipated, new family-friendly show coming to Disney Springs: Credit: Cirque du Soleil/Disney

Drawn to Life is a live acrobatic journey telling the story of Julie, a determined girl who discovers an unexpected gift left by her Disney animator father: an unfinished animation. As she dives into the inner world of animation, Julie embarks on an inspiring quest guided by a surprising pencil and filled with her childhood Disney memories. The story is driven by ten unique acrobatic acts, including an energetic Rhythmic Gymnastics group number and a pencil-test-inspired Aerial Pole routine, both of which were we caught during the preview. Drawn to Life also features animation from beloved Disney films as well as all-new animation created by Disney artists led by Eric Goldberg, best known for characters such as the Genie in the animated classic, “Aladdin.” 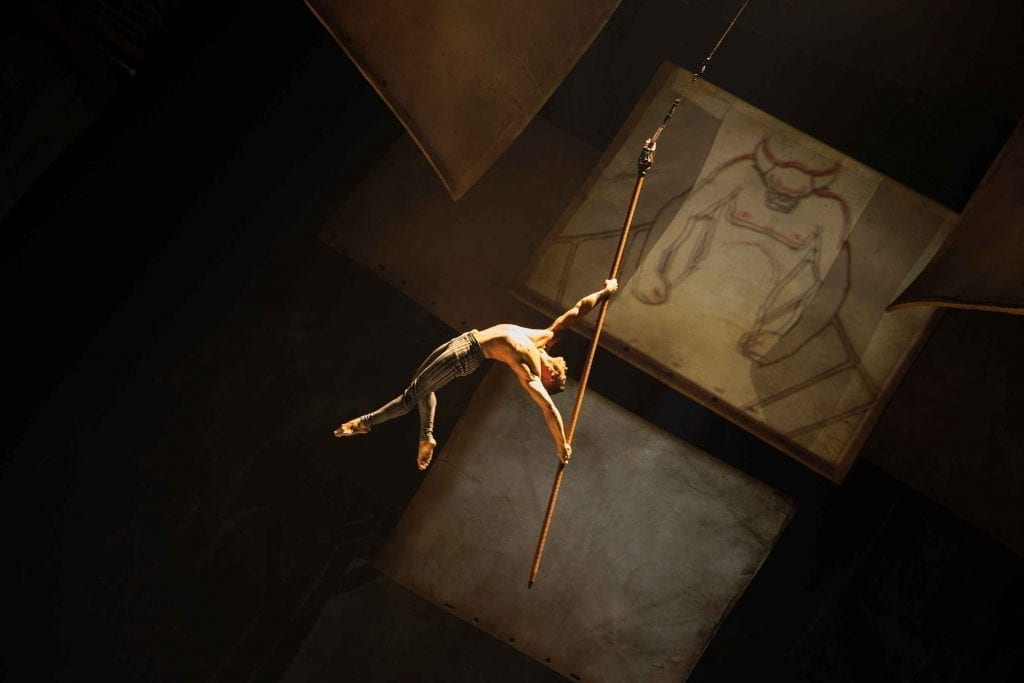 One of two acrobatic acts and the set of Drawn to Life, the highly anticipated, new family-friendly show coming to Disney Springs: Credit: Cirque du Soleil/Disney

During the second act of the show, we saw classic Disney animation sketch sequences that were brought to life. The visuals of the sketches, along with the music and amazing performance of a performer on an Aerial Pole, were breathtaking.

“Our show uses new technologies and art forms to portray the innate physicality of animation,” says Michel Laprise, Show Writer & Director. “During a number of the acts, classic Disney animation sequences come alive via contemporary projections, complementing the spectacular feats of our acrobats.

Audience members of all ages will not only be enthralled by the unbelievable talent and strength of the acrobats of Drawn to Life, but by the stunning stage and props as well. Stephane Roy, the show’s award-winning Set Designer, managed to create a fully immersive world for Julie’s journey inside the world of animation with no detail overlooked. Drawn to Life plays out on a vast stage made to look like an animator’s desk; sheets of paper surround the stage resembling the stacks of drafts that an animator inevitably sifts through during their creation process while a colossal version of an animator’s lamp towers overhead.

“Every aspect of the set design has been meticulously crafted by Stephane, who left no detail of the animator’s world untouched. The size and scope of props used in the show are spellbinding,’’ says Fabrice Becker, Creation Director.

How amazing is this! Star Wars: Galactic Starcruis