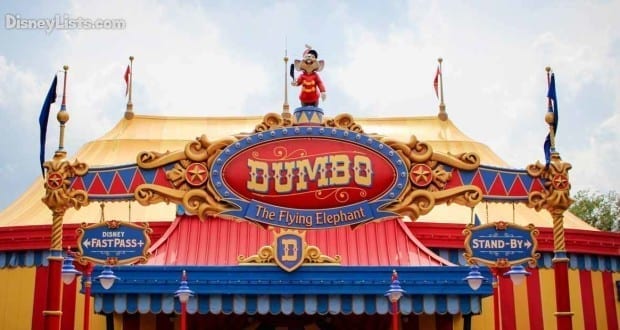 Dumbo, the Flying Elephant, is one of the classic attractions that has become a staple and fan favorite at every Disney location around the world. Dumbo is just such a beloved character, and his story sends a great message that, how could you not love an attraction based on him? If you are a fan of the attraction, then you have to check out these facts about secrets about Dumbo the Flying Elephant:

10 – The attraction made a huge move (and doubled).

The ride used to be closer within the heart of Fantasyland (what we may think of as “old” Fantasyland now) close to the carousel. New Fantasyland was built, and Dumbo was moved to the Storybook Circus area where Mickey’s Toontown Fair used to be. Not only that, but the attraction doubled. There used to be just one carousel of flying elephants, but now there are 2, so the ride capacity was doubled, allowing guests to move through the queue faster. You will also notice the water features that were added to match Disneyland’s version of the attraction. The water wasn’t on the original Magic Kingdom version.

This was at the Disneyland attraction, but still a really cool fact relevant to the ride itself. Harry Truman actually refused to ride Dumbo because the elephant is the mascot for the Republican Party. That is definitely a commitment to avoiding comments and jokes about him riding in an elephant. I wonder what he would have thought of the elephants in Animal Kingdom!

When the ride was originally designed, the story was that these would represent the pink elephants that Dumbo hallucinated after he accidentally got a little drunk on champagne. The elephants were all painted pink as part of the design when the attraction was created at Disneyland. Walt didn’t like this at all and had them all repainted to gray to look like Dumbo.

7 – There are 32 total flying elephants at the Magic Kingdom.

There are 2 different Dumbo rides. One is the FastPass side while the other is the standby line, allowing more guests to be able to enjoy the classic attraction with less wait times. Each of the rides has a total of 16 flying Dumbo’s, so there are 32 different Dumbo’s that you may see flying through the air at any given time. 6 – One of the opening day attractions for the Magic Kingdom.

Dumbo has been with the Magic Kingdom since the very beginning.  This attraction was up and running on the first day the Magic Kingdom saw live guests in 1971.  We have a feeling that Dumbo will be around for many years to come, too!

5 – The 2 different Dumbo attractions rotate in opposite directions.

Pay attention the next time you are at this attraction at the Magic Kingdom.  You will notice that they are moving in opposite directions.  The ride on the left rotates clockwise, while the one the right rotates counter-clockwise.  This one Dumbo ride is the only Disney attraction of its kind in the entire world that does not travel counter-clockwise.

Since the expansion was completed to add the 2nd Dumbo ride and relocate the attraction, the Imagineers added a fantastic play place for the kids while they wait. You actually get a pager, and it lets you know when to go and get back in line. Have the kids pay attention for a special rope they can pull that will create a neat light effect for them to watch!

3 – An exact replica of the original attraction is at Tokyo Disneyland.

If you are a fan of the oldies but goodies and appreciate the nostalgia of classic Disney attractions, then this is a good excuse to go over and visit Tokyo Disneyland (like we need an excuse…). You will find an exact replica of the original Dumbo the Flying Elephant attraction as it looked and functioned in 1971 when the Magic Kingdom first opened. It is almost a rite of passage to take your picture while on Dumbo. Most guests have someone waiting from outside taking pics as they go flying by. As we have become such a heavy smartphone society, the Dumbo selfies have also become extremely popular. Don’t forget to take your classic pictures when you are on the ride!

When the renovation was done to the attraction, one of the original ride vehicles was going on eBay for $30,000. It would be such a cool item to own if you could find a place to display it, but $30,000 for just one of the ride vehicles is pretty steep! If only I could have won the Power Ball!