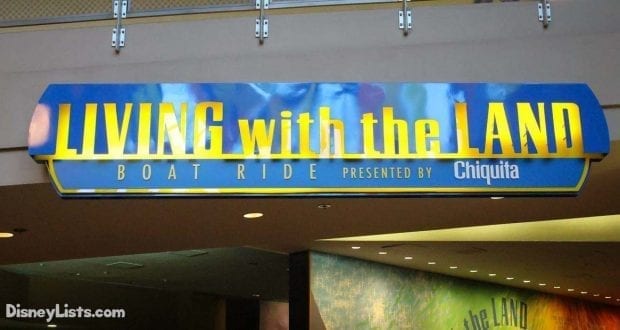 Living with the Land is a boat ride through the Land garden and greenhouses.  The ride is very interesting and educational as you learn more about the unique methods that Disney is using in order to increase the total produce yield and improve the quality of the output.  Here are 8 great facts and secrets about Living with the Land:

8 – The attraction has had a name change.

7 – The biomes are quite impressive.

The biomes that you see on the attraction where the plant are grown are much more controlled than you even realize. The different biomes vary to mimic the rainforest, desert, and prairie-like conditions to foster the perfect environment for the native plants. Not only that, the biomes have various effect capabilities to ensure the ideal conditions further. There is sound and lighting technology as well as wind, mist, and heat that are artificially generated to simulate the environment. These can be tweaked as need, too. 6 – The produce is served at Disney restaurants.

Pay attention to the mailbox in the scene with the house. It has the number 82 on it, indicating 82 for the house number. This may seem like some arbitrary number, but of course, in true Disney fashion… it isn’t! 1982 is the year that Epcot opened, so 82 was a nice nod from the Imagineers to pay homage to the Epcot’s opening.

Pay attention to the buffalo and prairie dogs in the desert scene during the attraction. These buffalo and prairie dogs were actually created before Epcot was even in the planning stages. These animatronic animals were initially intended to be located at the Magic Kingdom. Imagineers planned to develop an attraction called the Western River Expedition, which would be a boat ride through the western desert and include desert animals and surroundings. The location for this attraction ended up getting replaced with the Pirates of the Caribbean, so these animals made their way to storage until years later when Living with the Land was being constructed, and they realized the animals could find a home in Epcot.

3 – The ride used to be narrated by cast members. The animatronic dog in the farm scene will likely look familiar to you. It is the same dog that appears in Carousel of Progress and Pirates of the Caribbean at the Magic Kingdom. Not only that, this specific animatronic was modeled after Walt Disney’s own dog in real life.