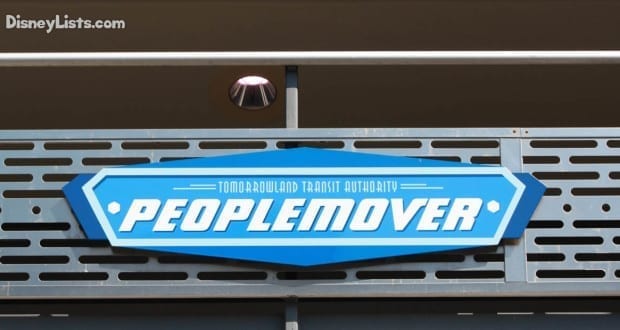 There is just something about the PeopleMover that leaves all of us jumping on board over and over again.  The attraction is slower-moving and takes you all over Tomorrowland.  You get sneak peeks at many of the attractions around the area and peeks at other neat scenes and setups. You are also above everyone walking below, so you can wave to other guests and even the characters that are below.  Here are some really cool facts and secrets about Tomorrowland Transit Authority PeopleMover:

It may look at times like there isn’t even a ride queue at all since you usually can walk right onto the attraction. The ride is continuously moving and loading, so there has to be a big rush of people for it to get backed up. There is a chain queue next to the attraction if it does get backed up during the busy seasons. In the original backstory for the Tomorrowland Transit Authority backstory, the ride audio referenced that there were three different ride lines. The lines were Blue, Green, and Red. The Blue line was the ride as we knew it. The Green line was supposed to be local transportation to other cities, while the Red line was supposed to be destinations that took you off of the planet. It was a great backstory and helped provide the impression of a much larger transportation system within Tomorrowland.

While you are on the attraction, you pass through tunnels that have various windows and openings for you to look into. In one of the opportunities, you will see a fantastic model of Walt’s Progress City. This is the original model for E.P.C.O.T., Walt’s Experimental Prototype Community of Tomorrow, that was also used as the inspiration for the Epcot theme park. This model used to be in the upper level of Disneyland’s Carousel of Progress and then was relocated to be on display at Walt Disney World. This one-part definitely steals a lot of the show in my heart.

3 – Goodyear did not sponsor the Walt Disney World version.

The Disneyland version of the attraction was sponsored by Goodyear. When the PeopleMover was created for Walt Disney World, it didn’t use the same Goodyear tire propulsion system in the functionality of the attraction, so they decided not to sponsor this one. The Edison Electric Institute became the original sponsor for the ride instead.

2 – You may see the lights on in Space Mountain.

Space Mountain remains a top-rated and beloved attraction at the Magic Kingdom. When you ride the PeopleMover, you pass by windows that let you see the attraction as guests are riding it. It is very dark, and you can’t see much of anything besides what looks to be stars and other effects moving along. If you ride the attraction when the ride happens to be down or experiencing an issue, you actually get the opportunity to see the Space Mountain with the lights on. We think it is pretty cool to see what the rails look like and how everything runs together. 1 – Favorite line from the ride audio.

Probably the most quoted and notorious line from the audio portion of the attraction is, “Paging Mr. Morrow… Mr. Tom Morrow.”  It is a clever nod to Tomorrowland, too! Be sure to listen for it while on the attraction if you haven’t paid attention in the past.