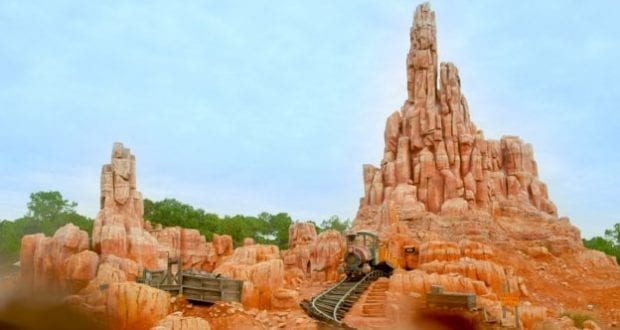 Howdy partners! Now you can take part in a virtual ride of the wildest ride in the wilderness! Catch all the details below!

Howdy partners! Big Thunder Mountain Railroad is an iconic Disney attraction that has brought thrills to adventurers of all ages for decades. I was 7 years old the first time I sat down in that clickety-clackety mine train, and I’ve loved it ever since. With versions of the attraction in Disney parks around the world, I’m sure many of you feel the same way.

In the latest installment of our #DisneyMagicMoments series, check out the video below for a virtual ride on Big Thunder Mountain Railroad in Magic Kingdom Park at Walt Disney World Resort. Descend into an abandoned mine shaft and board your train for an adventure evading boulders, dodging explosions and swooping through canyons in the mysterious town of Tumbleweed.

So are you ready? For your safety, remain seated on your couch, lounge chair, bed, kitchen stool … or wherever you may be viewing this special video. And be sure to watch your kids. If any of you folks are wearin’ hats or glasses, best remove ’em. ’Cause … say it with me now … THIS HERE’S THE WILDEST RIDE IN THE WILDERNESS!

Big Thunder Mountain is definitely the most “rootinest, tootinest ride” found in all of Walt Disney World. The attraction lives in Frontierland at the Magic Kingdom. During the ride, you take off in a train on the Big Thunder Mountain Railroad through the mine with many incredible thrills and surprises along the way. The ride also holds various hidden secrets and extras that you may not have noticed, even if you have ridden the ride several times. Here are 10 facts and secrets you may not know about Big Thunder Mountain: Yep, you can actually trigger “explosives” to go off on the mountain. When you are in the queue, pay attention to when you are in the Explosives Magazine room. There will be instructions for how to use the cranks and plungers to set off the explosions. Follow all directions and watch to see what happens.

6 – The crate meant to be shipped to Fire Chief Richard Le Pere Jr.

Have you noticed the crate that sits next to the drinking fountain at the front of the attraction? The crate states that it is to be shipped to Fire Chief Richard Le Pere Jr. Fire Chief Richard Le Pere Jr. is actually a real person and a real fire chief. He is the fire chief at Reedy Creek Fire Department. This is important before Reedy Creek Fire Department is the fire department that services all of Walt Disney World Resort.