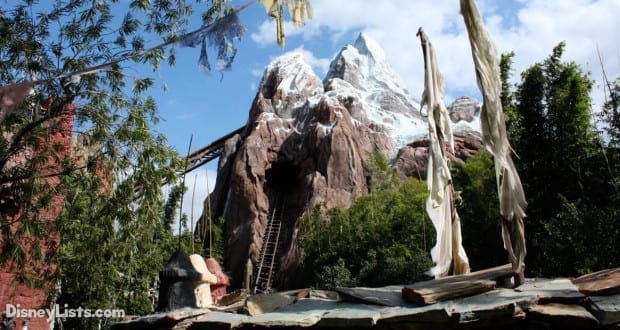 Expedition Everest is one of the most impressive attractions in all of Walt Disney World Resort. It is a thrill ride that is perfectly themed to meet every detail that Disney’s Imagineers wanted to bring to guests. You will find the attraction in the Asia section of Animal Kingdom, and you will definitely want to ride this one more than once. Here are 10 facts and secrets about this fantastic attraction.

The answer is, not! If you watch as guests ride the attraction, you will notice smoke-like effects in the loading area that make it look like the trains are actually steam engines. They are not at all powered by steam, but we love the illusion just the same.

Pay careful attention to the area where you check the height for children to be able to ride the ride. You will notice that they must be as tall as the Yeti foot! This just so happens to be 44 inches. Eric Shipton became notorious for the picture that he took of what he claims to be a picture of a Yeti footprint. If you look in the museum in the ride, you will notice a molding of the footprint that is supposed to be a replica of this famous picture.

Spoiler alert… you will encounter the Yeti during that attraction. He stands at a massive 22 feet tall. He always seems even more prominent to me when we are rolling through (quite quickly I might add), but 22 feet is still pretty tall!

5 – The memorabilia is actually authentic

If you have been on the attraction, you may remember all of the gear and equipment found decorating the ride queue. This gear is actually authentic. Many of the items were purchased from Nepalese stores. Items that weren’t purchased were found at the base of Mount Everest and repurposed for our enjoyment.

Our beloved Expedition Everest attraction sits at precisely 199 feet tall. The Imagineers had to do this to prevent a flashing light from being required on the structure to alert airplanes that may be flying overhead. Disney couldn’t allow a flashing light to take away from experience, so they kept it just under the requirement and use shading, shape, etc. to make it visually look even taller.

3 – The truth about the red elements in the buildings

The Imagineers included the red coloring around the corners of the windows, doorways, etc. because the Himalayans did the same thing to their buildings because they believed that this warded away evil spirits. 2 – Disney spent a lot of money on this attraction

$100,000,000 to be exact! Next time you ride the attraction, think about how much money was put into this attraction and how Disney really does spare no expense to ensure that every detail is carefully planned and executed in their attractions. This still holds the title of the most expensive roller coaster in the world, with the 2ndrunner up coming in at $52,000,000. I have a feeling it will continue to hold its spot for a while!

1 – The Yeti is actually broken

Yes, he is actually broken. All that money spent and the Yeti doesn’t at all function as initially intended. When the ride first opened, he actually moved and swung his arm over your car, which was much scarier than what we see today. He has the name “Disco Yeti” because of the effects with lighting and strobe effects put in place behind him to give the illusion that he was moving. He has such a large frame that he actually cracked the foundation underneath him and isn’t able to move correctly. One of the imaginers vowed at a D23 convention a few years ago that he will fix the Yeti one day, so hopefully, we will get to see him restored to his scary glory at some point in the future!