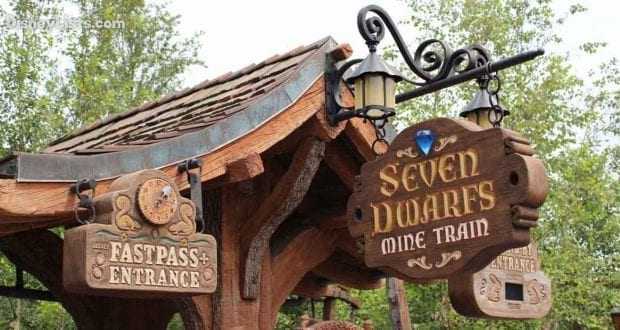 The ride queue is very interactive, which was a great idea since the wait time is always so long. In one of the interactive parts, you will see 12 wooden spigots that look like animal friends from the film. They are each a note from the chromatic scale. When they are all put together, they will play the melody from the beloved Snow White and the Seven Dwarfs! The imagineers really put a lot of effort into this one!

This is unique across all Disney attractions! The minecarts are designed to that each individual cart sways from side to side. Five carts are tethered together to make the journey around and through the mine, which each independently swaying freely from side to side the entire ride. The same company that was responsible for building Big Thunder Mountain for Tokyo Disneyland and Disneyland Paris also built the Seven Dwarfs Mine Train. Vekoma is the name of the company, and its home base is in Holland. They designed and executed the design for the attraction.

7 – The dwarfs are amazing audio-animatronics.

You will be extremely impressed as soon as you see the expressions and characteristics of the dwarf animatronics. They have been created so that their faces look like live animated faces that look, react, and express the same expressions as their characters from the movie. They really are brought to life right in front of your eyes. It makes the entire experience so much more real. Disney really can do some amazing things!

You will notice figures of some of the dwarfs along with the vultures from the Snow Whites Scary Adventures attraction. The figures were repurposed to be used in sections of the attraction outside of the mine. They work perfectly within the attraction, and they pay homage to an old attraction that we do miss from time to time.

We hope that guest video footage becomes a recurring trend across many more attractions, but currently, it is limited to Seven Dwarfs Mine Train and Tower of Terror. What this means is that video footage is actually taken while you are on the attraction and then will appear within your PhotoPass photos as a video that is available to view and download. It is such a great surprise and a great memory to have captured in a video.

You may remember in the film how, when they put the gems in the vault at the mine, that Dopey always hung the key on a nail that was right next to the mine door for safekeeping. The Imagineers added this element and nod to the film into the attraction by adding a real vault key and recreating the scene within the ride queue of the attraction.

If you look closely at mine carts that you ride in, you will notice that no one is the same. They were each individually painted and designed to look aged and worn. This level of detail and care was even put into the bolts and finishings on the mine carts so that they looked like old and worn mine carts for you to ride in. This song, “Music In Your Soup,” is heard while in the ride queue and around the area for the attraction. The Imagineers added it back in to pay homage to the film. The song was originally part of the film but ended up being cut out.

The gems in the mine are stunning and beautiful. Once you enter the mine, you will be surrounded by them. You will notice that there are four different sizes of gems, and then they appear in six different colors. The colors that you will see are yellow, purple, green, blue, red, and clear (diamond).

Any Jasmine fans out there? #PrincessJasmine . . .