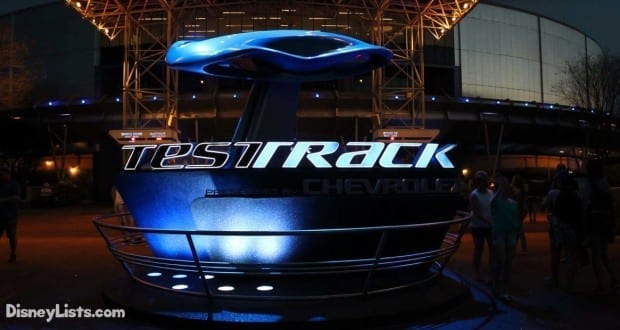 10 Facts and Secrets About Test Track at Disney’s Epcot

Do you have a need for speed?  Do you love cars?  This is definitely your attraction.  This ride remains popular year after year, and it’s easy to see why.  If you are a fan of the ride, there are several facts about the ride that you may not know.  Keep reading and learn more about this amazing thrill ride:

10 – How many miles do these cars travel?

One of the cars on Test Track will actually travel about 50,000 miles each year. The cars are built to travel about 1 million miles in their lifetime, so at this rate, they have about 20 years of life in them as far as mileage goes.

The attraction opened in 1999. It is hard to believe! The attraction is now 21 years old, and makes me feel so old! This still remains one of the most popular attractions on property, and the lines are consistently long. Don’t forget to FastPass this one. 8 – Fastest ride in all of Walt Disney World.

Test Track continues to hold its position at the fastest ride across all of Walt Disney World, reaching speeds around 65mph.  This would definitely classify this attraction as a thrill ride, and one that you must experience if you have a need for speed!

7 – Longest ride in all of Walt Disney World.

Not only is it the fastest ride in all of Walt Disney World, but it is also has the longest track.  The track for this attraction spans 5,246 feet. This is just short of being a full mile!  That is one long attraction filled with thrills and fun!

6 – The cars could power a space shuttle.

Yes… I don’t make this stuff up!  There are 3 computers that power each car.  If you combined the power of these 3 computers, it would be more than enough power to power a space shuttle.  That will definitely change the way that you look at how powerful and amazing this attraction is!

5 – We could have had a much faster ride!

When the ride was originally being designed, the Imagineers intended for the cars to reach speeds of 95 miles per hour. Due to safety concerns and Florida speed limits, they decided to reign it back to 65 miles per hour. The ride already feels crazy fast and thrilling. Could you imagine it at 95 miles per hour? That would have been amazing!!

4 – Avoid this ride if you see lightning.

If the weather is questionable and you see lightning, don’t even bother heading over to the ride. Since there is a good portion of the ride that is outside, there are strict safety rules related to weather for this one. If the weather is poor, the ride shuts down, and no one can ride. Safety first!

3 – GM used to be the original sponsor for the attraction.

When the ride opened in 1999, GM was the sponsor for the attraction. When attraction received a makeover and a new look, it reopened with Chevrolet as the new sponsor in 2012. Chevrolet is still the current sponsor today, and you can see many amazing cars in the gallery when you exit the attraction. 2 – If there is a hurricane, this ride will be left standing.

So it is no secret that Florida can get some pretty crazy storms, including hurricanes. Even though Orlando is centrally located, they still get a fair share of storms every few years. To ensure that the attraction was storm rated and safe, especially with so much of it outside, the attraction was built to withstand winds that reach as much as 200 miles per hour. That would take a LOT to take Test Track down, so I think it is safe to say that in most cases, this ride is going to be left standing after a bad storm.

1 – 25 cars are running at once on the attraction.

25 cars! Each car seats 6, so that is 150 people that could be on or getting on the attraction at any given point of time. This helps push a lot of people through the attraction in a single day. There are also spare cars available if one of the cars needs maintenance or has an issue that pulls it out of circulation.